New Research Center Will Take 3D Printing To The Next Level

On October 6, a Boeing 747 modified for testing jet engines taxied along a concrete runway on the edge of the Mojave Desert and took off with a brand new engine strapped to its left wing. Although the engine’s maiden flight was short, it made aviation... 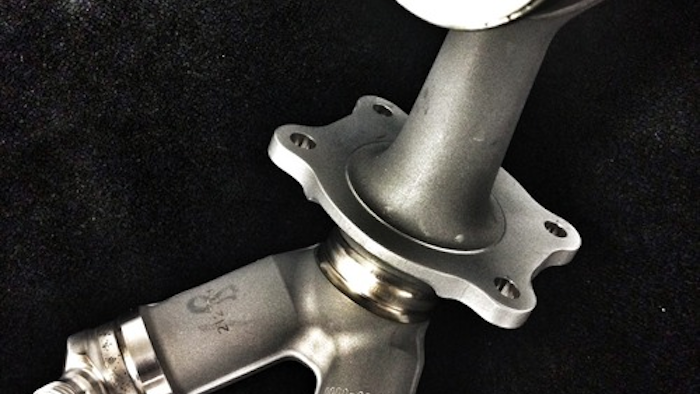 On October 6, a Boeing 747 modified for testing jet engines taxied along a concrete runway on the edge of the Mojave Desert and took off with a brand new engine strapped to its left wing. Although the engine’s maiden flight was short, it made aviation history. For the first time, the engine, called LEAP, flew with 19 fuel nozzles 3D-printed by a computer-guided laser from layers of metal powder (see below). “We designed these nozzles to efficiently feed fuel into the jet engine, but they are also a work of art,” says Greg Morris, a 3D-printing pioneer who leads additive manufacturing research at GE Aviation. (GE Aviation acquired his company, Morris Technologies, in 2012.) “Methods like 3D printing give designers new freedoms and unleash their imagination. You couldn’t make this nozzle any other way.”

GE is making sure that 3D printing and other additive manufacturing tools like it liberate every designer on its payroll. The company just announced it would spend $32 million to build a new research and education center focused on additive technologies in Pennsylvania. “We want to light the fire behind additive,” Morris says. “This is still a young tool, but it’s also a very powerful and disruptive tool. We want to maximize its use across all of GE’s businesses.”

Additive manufacturing is the opposite of traditional “subtractive” manufacturing methods like turning, milling and drilling, which remove material from the product to achieve its final shape. Additive techniques, as the name implies, makes parts by adding one thin layer of material on top of another. It’s like building a loaf of bread from individual slices.

This approach allows designers to achieve lighter and more durable shapes that were previously impossible to produce. Since the finished components are very close to the final look, the technology can also dramatically reduce manufacturing waste. The 3D-printed LEAP fuel nozzle, for example, is five times more durable than the previous model, and 25 percent lighter. Additive manufacturing allowed engineers to reduce the number of individual pieces that were brazed and welded together from 20 to just one part, and achieve the best fuel flow geometry. “These tools unleash incredible creativity,” Morris says.

(The nozzles are made by Advanced Atomization Technologies, a joint venture between GE and Parker Aerospace. The LEAP engine was developed by CFM International, a joint company owned equally by GE and France’s Snecma.)

GE will use the new 125,000-square-foot facility, which will be located in western Pennsylvania, to train designers and engineers on additive manufacturing design and production, and work closely with students at nearby Carnegie Mellon University, Penn State and the University of Pittsburgh. The center will have 3D printers and other additive machines that can work both with plastics and metal. GE businesses will have access to the machines to handle overflow orders, make prototypes and produce new parts without spending capital on their own. “The idea is to bring everyone together, share costs and explore our common needs,” Morris says. “It will also help us keep certain intellectual property in house.”

Besides using additive manufacturing to make things, the center’s 50 engineers will also work on developing new materials for additive technologies.

“We made a big bet that additive manufacturing is not a flash in a pan,” Morris says. “We know  this is a way we are going to make various parts in the future. We are now in the process of training people and building awareness throughout the company. Engineers need to realize that they have this very powerful and enabling tool at their disposal.”

The new center is scheduled to open in 2015.