5 Questions About The Historic Comet Landing

The European Space Agency has achieved a historic first — landing a washing machine-sized spacecraft on a comet speeding through our solar system at 41,000 mph (66,000 kph). Here are answers to five questions about the space mission... 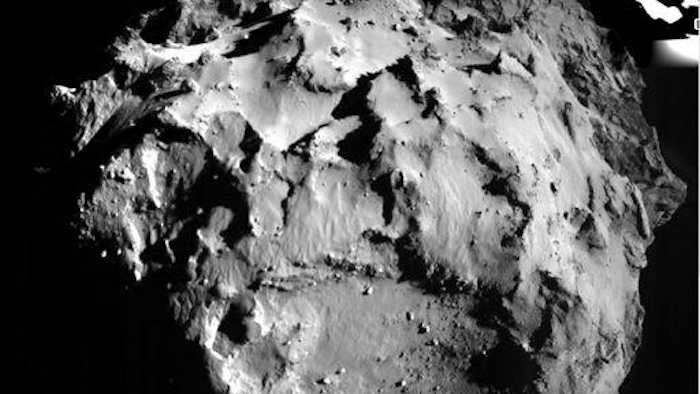 The European Space Agency has achieved a historic first — landing a washing machine-sized spacecraft on a comet speeding through our solar system at 41,000 mph (66,000 kph). Here are answers to five questions about the space mission:

HOW DIFFICULT WAS IT TO LAND ON A COMET?

Nothing like Wednesday's landing had ever been attempted before.

NASA landed a probe on an asteroid in 2001, but comets are much more volatile destinations because they continually release dust and gas that can harm a spacecraft. Also, because this landing was taking place 311 million miles (500 million kilometers) from the Earth, the Rosetta spacecraft and the Philae lander it carried were both designed to perform the landing autonomously. Once they received the go-ahead, there was nothing scientists at mission control in Darmstadt, Germany could do to adjust the lander's course.

Philae's separation from Rosetta also had to be extremely precise. An error of just one inch during separation could have put the lander 250 meters (820 feet) off target on the comet named 67P/Churyumov-Gerasimenko. But Paolo Ferri, head of mission operations for the space agency, said Philae's landing was almost perfectly on target — save for one unplanned bounce.

WHERE THERE ANY PROBLEMS WITH THE LANDING?

First, the lander failed to wake up properly Tuesday. Scientists fixed that with a trick familiar to anyone who has used a computer. They rebooted it.

After the separation from Rosetta is became clear that there was a problem with Philae's downward thrusters. They were designed to press the lander onto the surface during the final touchdown, to help it get a grip using harpoons and screws. The thruster failure wouldn't have been so dramatic if the harpoons had fired, but they didn't. So Philae bounced, once, before coming to rest again on the comet.

Scientists are also trying to resolve intermittent communication problems with the lander, but those shouldn't interfere too badly with the mission.

WHAT DATA ARE SCIENTISTS SEEKING?

Scientists have likened the trillion or so comets in our solar system to time capsules that remain virtually unchanged since the earliest moments of the universe. One of the things they are most excited about is the possibility that the mission might help confirm that comets brought the building blocks of life — organic matter and water — to Earth. They already know that comets contain amino acids, a key component of cells. Finding the right kind of amino acids and water would be an important hint that life on Earth did come from space.

HOW WILL THE LANDER COLLECT DATA?

"The science starts the minute we get down to the ground," said Mark McCaughrean, a senior scientific adviser on the mission. Philae has ten instruments on board — including devices to measure light, electrical magnetism and heat — and flying up above the comet the Rosetta spacecraft has another 11 instruments. The Philae lander will provide plenty of images of a world no human has ever seen close up and will drill below the surface to extract a sample of the comet that will be analyzed onboard.

The lander's batteries are expected to last just 64 hours — but that should be enough for scientists to gather a huge wealth of data. In addition, the lander has a solar panel that should provide an hour's worth of battery life per day for up to five months.

WHAT CHALLENGES LIE AHEAD?

The comet is on a 6 ½-year elliptical orbit around the sun. At the moment it is getting closer to our star. This makes for great science, since Philae and Rosetta will be able to observe the comet becoming more active.

As 67P approaches the sun, the amount of matter it sheds will greatly increase, posing a potential risk to the lander and even to the Rosetta spacecraft flying in tandem with the comet. As the comet reaches perihelion, the closest point to the sun, the rising temperatures could also damage Philae. But the lander should remain stuck to the comet forever, even after its systems have shut down. Rosetta will continue to fly alongside the comet until the end of its useful lifetime in about two years. Scientists have suggested that a fitting end would be for it, too, to land on the comet and reunite with the lander once more.

The rules bring the nation closer to more routine drone operations, including for package delivery.
Dec 29th, 2020
Follow Us
Most Recent