The surviving pilot of the Virgin Galactic spaceship that tore apart over the Mojave Desert was thrown clear of the disintegrating craft and did not know his co-pilot had prematurely unlocked the re-entry braking system, federal investigators said Wednesday. In its update on the still-evolving... 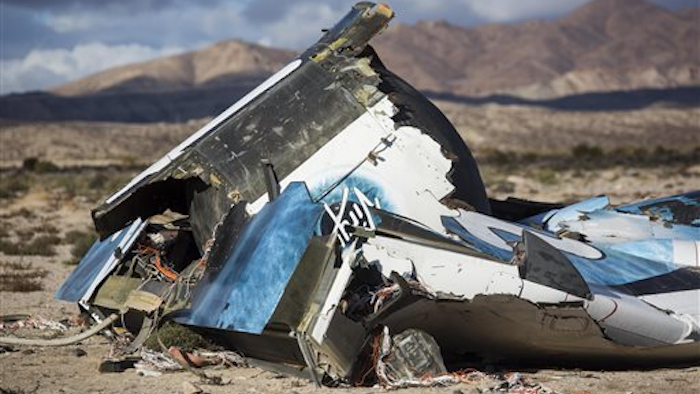 The surviving pilot of the Virgin Galactic spaceship that tore apart over the Mojave Desert was thrown clear of the disintegrating craft and did not know his co-pilot had prematurely unlocked the re-entry braking system, federal investigators said Wednesday.

In its update on the still-evolving investigation, the National Transportation Safety Board did not provide any details on what caused SpaceShipTwo to crash Oct. 31 in Southern California.

The NTSB previously said the ship designed to fly tourists to the edge of space broke apart a few seconds after the co-pilot unlocked the braking system.

Pilot Peter Siebold told investigators Friday that he was pulled from the vehicle when it disintegrated. He said he unbuckled from his seat at some point during his fall and his parachute deployed automatically.

While the full investigation could take up to a year to complete, NTSB Acting Chairman Christopher Hart identified the vehicle's unique "feather" braking system as a possible culprit. The craft is designed to shift its shape as it re-enters Earth's atmosphere. The twin tails, or feathers, tilt upright to create drag as the vehicle plummets to Earth.

Engaging the feathering system is a two-step process. A pilot must first unlock the system and then a lever must be pulled to activate the feathers.

The feathers aren't supposed to be unlocked until the craft reaches Mach 1.4, or more than 1,000 mph. However, co-pilot Mike Alsbury could be seen on inflight video unlocking the system before the vehicle had reached Mach 1.0, Hart has said. The second step to activate the feathers was never taken, but the system engaged anyway. The vehicle broke up two to three seconds later.

The NTSB also said Wednesday that it is reviewing safety documentation and the design of the feather system.