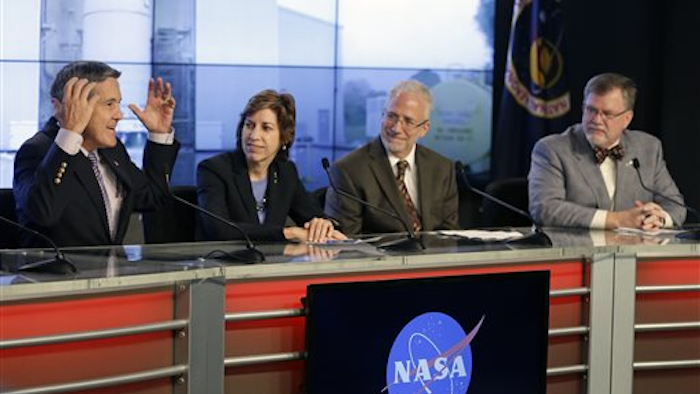 "This spacecraft is going to push the boundaries of scientific discovery and human achievement," said Michael Hawes, Lockheed Martin Orion program manager. "One day, not too far in the future, an astronaut will leave the first footprints in the red dust of Mars, and we'll look back and say that journey started here."

This morning, the 50,000 lb. spacecraft was lifted about 200 feet up and mated to the United Launch Alliance (ULA) Delta IV Heavy rocket, which Lockheed Martin contracted for the flight. Over the next few weeks, the rocket and spacecraft will be integrated and powered up, and engineers will test and verify interfaces between the two in preparation for Exploration Flight Test-1 (EFT-1).

"It has been a tremendous team effort with all of our mission partners to get us to this point just one month prior to launch," said Jim England, ULA's EFT-1 program manager. "We are honored to play such a critical role in this important launch for NASA and are focused on providing mission success so that Orion can complete all of its mission objectives."

During EFT-1, the uncrewed spacecraft will travel 3,600 miles beyond Earth-15 times further than the International Space Station. That same day, Orion will return to Earth at a speed of approximately 20,000 mph for a splashdown in the Pacific Ocean. EFT-1 will provide engineers with data about systems critical to crew safety, such as heat shield performance, separation events, avionics and software performance, attitude control and guidance, parachute deployment, and recovery operations to validate designs of the spacecraft before it begins carrying humans to new destinations in deep space.

Headquartered in Bethesda, Maryland, Lockheed Martin is a global security and aerospace company that employs approximately 113,000 people worldwide and is principally engaged in the research, design, development, manufacture, integration and sustainment of advanced technology systems, products and services. The Corporation's net sales for 2013 were $45.4 billion.

With more than a century of combined heritage, United Launch Alliance is the nation's most experienced and reliable launch service provider. ULA has successfully delivered nearly 90 satellites to orbit that provide critical capabilities for troops in the field, aid meteorologists in tracking severe weather, enable personal device-based GPS navigation and unlock the mysteries of our solar system.