A SpaceX capsule loaded with space station experiments is back on Earth. The unmanned Dragon capsule parachuted into the Pacific, west of Mexico's Baja Peninsula, on Saturday. It departed the International Space Station earlier in the day with 3,300 pounds of gear... 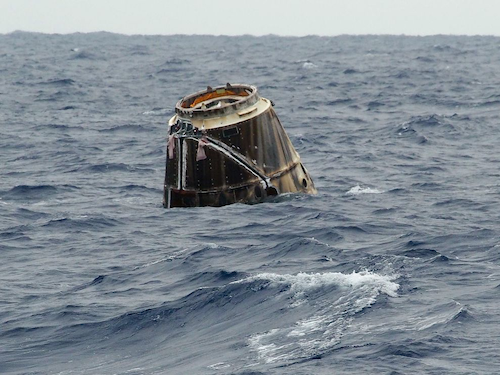 A SpaceX capsule loaded with space station experiments is back on Earth.

The unmanned Dragon capsule parachuted into the Pacific, west of Mexico's Baja Peninsula, on Saturday.

It departed the International Space Station earlier in the day with 3,300 pounds of gear for NASA, including valuable science samples.

The California-based SpaceX company launched the Dragon from Cape Canaveral, Florida, on Sept. 21. It was the fifth Dragon shipment. High seas in the recovery area delayed its return by four days.

NASA is paying SpaceX and Orbital Sciences Corp. to make station supply runs. Only SpaceX is capable of bringing cargo back intact.

Orbital's next launch is scheduled for Monday from Wallops Island, Virginia.