States Grovel Before Boeing In Bid For 777X Jobs

With Boeing the king of U.S. aircraft manufacturing, more than a dozen states are groveling before the throne for a share of the riches to be made from the next-generation 777 jetliner.From coast to coast, states are rushing to impress Boeing with lavish incentive packages that offer property, labor deals and billions of dollars in tax breaks. 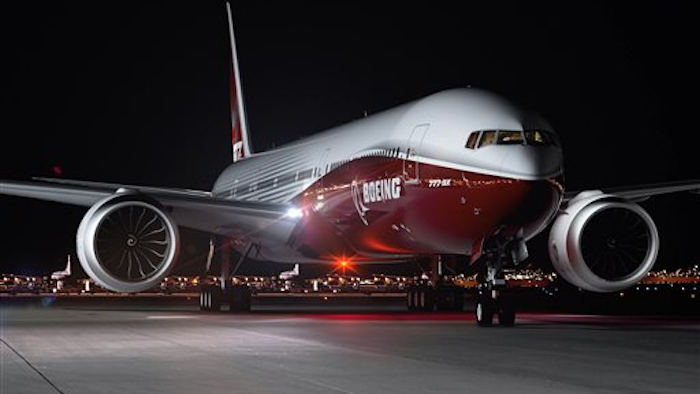 JEFFERSON CITY, Mo. (AP) -- With Boeing the king of U.S. aircraft manufacturing, more than a dozen states are groveling before the throne for a share of the riches to be made from the next-generation 777 jetliner.

The competition underscores Boeing's commanding bargaining position in an economy where top-notch manufacturing jobs remain scarce and elected officials feel obligated to pursue every growth opportunity, no matter how improbable.

"We have gotten a tremendous response, and it's obviously created a lot of interest and a lot of excitement," Boeing spokesman Doug Alder said.

The contest unfolded in a mere matter of weeks after a machinists' union in Washington state rejected Boeing's proposed contract for the 777X because it would have replaced their traditional pension with a defined-contribution savings plan.

The Chicago-based company said it would look elsewhere and gave states until Tuesday to submit proposals. Winners will be announced early next year.

The Boeing buzz has been loudest in Missouri, where Gov. Jay Nixon immediately convened a special legislative session to approve an incentive package valued at up to $1.7 billion over more than two decades. The plan passed the Senate with bipartisan support Wednesday and could win final approval in the House on Friday. Boeing never even had to send a lobbyist to talk to a lawmaker.

Missouri Sen. Eric Schmitt, a Republican hoping to entice Boeing to expand in his hometown of St. Louis, called the package "a transformational opportunity."

Other states are keeping the details of their offers out of the public spotlight — and away from the inquisitive eyes of their rivals— by crafting them through administrative agencies shielded by non-disclosure laws.

This time, Gov. Robert Bentley is stressing more than just financial incentives. He's tapping into Boeing's recent union frustrations by highlighting that Alabama is a "right-to-work" state, where union fees cannot be a condition of employment.

Bentley said Boeing officials told him that Alabama was their first state to visit after the union deal fell through. But other states also have reason to hope.

Utah Gov. Gary Herbert said Boeing leaders reached out to him, too. Utah officials are emphasizing that they have the youngest workforce in the U.S., as well as right-to-work rules. And it doesn't hurt that Boeing is already set to open an 850,000-square foot factory in a Salt Lake City suburb to make tail parts for a different model of plane.

Other states in the hunt — including Kansas, North and South Carolina and Texas — are banking on right-to-work laws of their own.

But labor regulations may not be as important as having a workforce already trained in commercial airplane production and a seaport for shipping huge airplane components, said Richard Aboulafia, an aerospace analyst at the Fairfax, Va.-based Teal Group Corp.

He predicts Boeing will use the offers as leverage to get Seattle-area machinists to make concessions, unless the company gets "some kind of unbelievable, almost inconceivably good deal."

Boeing's history in the Pacific Northwest dates back more than a century, when William Boeing purchased a Seattle shipyard that would become his first airplane factory. A decade ago, Washington enacted a broad package of tax breaks and other benefits for Boeing in an effort to keep the company's 787 manufacturing in the state.

In the years that followed, however, wing production moved to Japan, and a new production line was established in South Carolina.

Last month, Washington lawmakers approved nearly $9 billion of tax breaks for the 777X. Just a few days later, union members rejected the contract. But Gov. Jay Inslee now wants to sweeten the offer by getting lawmakers to sign off on a tax increase for transportation infrastructure improvements.

"In an era where middle-class jobs are imploding, it's understandable that Missouri is going to take a shot at the plate," Carlyle said. But "there is simply no way that another state can replicate the DNA that has been built into the Washington and aerospace relationship."

The long-range, twin-aisle 777 is Boeing's second-largest plane and has been a best-seller since its first flight in 1994. The new 777X is expected to carry as many as 400 passengers, about 35 more than the current model, and be more fuel efficient.

Boeing already has commitments from airlines worldwide to buy 259 planes valued at more than $95 billion.

Associated Press writers Mike Baker in Seattle, Brady McCombs in Salt Lake City and Phillip Rawls in Birmingham, Ala., contributed to his report.