The Vital Signs Of American Manufacturing

Short term improvements in jobs or sales are like a sick person getting some medicine from the doctor and feeling better the next day. A very thorough examination of all of the vital signs might show that the patient actually has a debilitating disease that will eventually render the patient bedridden over time.

American Manufacturing is in the news these days. A sudden wave of optimism about growth possibilities seems to pervade the media. There has been a lot of happy talk in 2013 about the future of manufacturing with titles like:

In fact the Boston Consulting Group is projecting that “the United States is in a strong position by around 2015 to eventually add 2 million to 3 million jobs and an estimated $100 billion in annual output in a range of industries.”

But, short term improvements in jobs or sales are like a sick person getting some medicine from the doctor and feeling better the next day. A very thorough examination of all of the vital signs might show that the patient actually has a debilitating disease that will eventually render the patient bedridden over time. A real assessment of American Manufacturing also requires a longer term examination of manufacturing vital signs.

1. MANUFACTURING JOBS - The Chart above shows that manufacturing reached a peak of about 17.2 million workers in 2000. As of 2009 manufacturing employment was 11.4 million workers. Around 5.8 million jobs were lost during the decade and so far we have gained back a little over a 500,000 jobs in the recovery. Most of the loss in manufacturing jobs coincided with the acceptance of China into the WTO, an increase in offshoring, and the huge increase in imports from China.

2. MANUFACTURING CREATES SECONDARY JOBS - Manufacturing stimulates employment in other sectors at a greater pace than other industries. On the average, each new manufacturing job creates about 2.9 other jobs in the economy. This “multiplier effect” is what makes new manufacturing jobs so important, but it is a meaningless statistic if manufacturing doesn’t create a lot more jobs.

3. MANUFACTURING LOCATIONS – From 2000 through 2011 America lost more then 58,000 manufacturing locations. This number has gone down every year since the high of 354,498 in year 2000. So in terms of new start-up companies manufacturing is still declining.

4. MANUFACTURERS PERFORM THE LARGEST SHARE OF R &D - Innovation and R and D have been a traditional strength of the U.S. for decades. In fact innovation and new technologies are the key to making American Manufacturing competitive in the future and manufacturing R&D is vital because it is 70% of all business R&D.

As Table 2 shows that investment in R&D (both public and private) has been pretty stable for 30 years and averages about 2.5% of GDP. Contrary to recent articles that argue that American R&D is in serious decline the overall numbers are pretty stable. However there are some disturbing trends. The government’s contribution to R&D is important because it has traditionally done the basic research that leads to applied R&D and spillovers for new products. Many of the basic research projects have been in physics, materials, and the physical sciences which lead to many new products. But almost half of the basic research is now devoted to health sciences not the physical sciences.

A second concern is that about 20% of the industry R&D is being done over seas according to the National Science Foundation[2] The industries doing most of the offshore R&D are important industries like motor vehicles, textiles and apparel, electrical equipment, chemicals, computers, semi conductors, and pharmaceuticals. One of the reasons for off-shoring R&D is that researchers are much cheaper and more plentiful.

Warren Buffet says, “The U.S. trade deficit is a bigger threat to the U.S. economy then either the federal deficit or consumer debt, and could lead to political; turmoil.” But the irony is that the trade deficit problem is hardly discussed in Washington D.C as if it is an accepted form of financing that must be financed by American taxpayers.

5. MANUFACTURING GENERATES EXPORTS: - Figure 2 above shows that manufacturing contributed an average of 70 percent of American export shipments every year since 2000. But, exports are not growing fast enough to offset the trade deficit, In fact we are beginning to lose our place as exporter to the world.” U.S. exports have fallen from 13.5 percent of world exports in 2001 to 11 percent in 2002. If increasing the ratio of exports to imports is the only way we can reduce our trade deficit, then manufacturing exports are not only vital they are the solution to the trade deficit problem.

6. ADVANCED TECHNOLOGY PRODUCTS – This is a very important part of manufacturing because America has always been the leader in developing new technologies. Robots, semiconductors, personal computers, the internet and a host of other technologies were invented in America. But we are fast losing our position as the world’s leading innovator and technology inventor. In year 2000 America had a $30 billion surplus in technology products and within 10 years we had a $56 billion deficit. A big part of this change has been caused by off shoring both manufacturing and R&D.

7. RESHORING VS OFFSHORING – Re-shoring or getting companies to bring back manufacturing from foreign countries is in the news these days. It is a positive step and a noble cause. But American companies are still off-shoring their products and product lines to overseas competitors. I am an absolute supporter of the re-shoring idea and people like Harry Mosier who led the charge on this initiative. But so far I cannot find any evidence that re-shoring is creating more American jobs then are being off-shored.

8. TRAINING AND EDUCATION – We are losing many high skilled employees to retirement in both blue collar and the white-collar ranks. America, particularly The Fortune 500 manufacturers, needs to invest at least 3% of sales into the training and education needed to replace retiring workers. Because so many of the retiring workers are multi-skilled craftsmen with more the n 30 years of experience the training programs need to be like the multi-skilled apprentice/journeyman programs. But except for a few midsize manufacturers there is no evidence that the big companies are going to invest in the training needed much less 3% of sales.

There are 2 reasons that the large manufacturers are not addressing the skilled worker issue. First they do not want to invest in longer term training that requires hundreds and sometimes thousands of hours of training. Second, if the employees could gain the skills required they don’t want to pay what the skills are worth. No matter how important training and educating new employees is said to be it is simply not happening.

9. MANUFACTURING IS KEY TO OUR NATIONAL DEFENSE - Many industries, like Aerospace, High Technology, Software, and others build the products that allow America to have the world’s most powerful arsenal. Basic industries like the Chemical, Petroleum, Mining, and Electronics industries are part of our strategic and defensive reserves. Maintaining these industries and the suppliers and skilled workers in them is also a matter of national security.

But, our free market economy has exported the manufacturing of many defense components and materials to lower cost producers which has seriously eroded the supply chain that made them. A report from a retired Brigadier General John Adams found that “U.S. National Security and the health of the nation’s defense industrial base are in jeopardy because of an over reliance on foreign suppliers for defense materials.”[3]The report specifically mentions:

These 9 vital signs are simply indicators of the health of manufacturing. The next article will explain what they all mean for American Manufacturing in the future and what we may have to do to grow the manufacturing sector.

Boeing to Resell Some Max Jets Ordered by Chinese Airlines 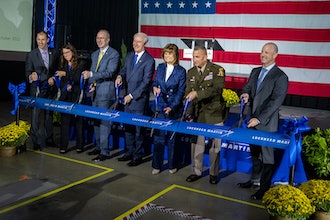 This is the second expansion at the site since the company announced a $142 million investment in June 2019.
October 5, 2022

The company has backing from Boeing and Kitty Hawk.
October 3, 2022