The chip shortage is causing downtime across North America.

Next week, the light-duty Chevrolet Silverado and GMC Sierra plants in Fort Wayne, Indiana, and Silao, Mexico, will cease production.

According to The Detroit News, the company hopes to resume production the week of Sept. 13.

In the interim, the company will work on completing and shipping unfinished vehicles.

The Wentzville Assembly facility in Missouri that makes midsize-pickup trucks will also be down for a week.

Plants in Spring Hill, Tennessee, and Lansing, Michigan, will be down for two weeks.

Finally, production will halt until Sept. 27 at CAMI Assembly in Canada and San Luis Potosi and Ramos Assembly in Mexico.

According to the AP, Ford will also halt pickup production for two weeks at its Kansas City Assembly Plant. The carmaker will also cut shifts at truck plants in Dearborn, Michigan, and Louisville, Kentucky. 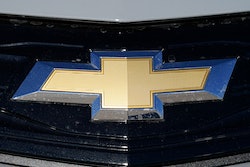