The ship's crew of 12 was rescued by helicopter late Monday after a power outage in its main engine. 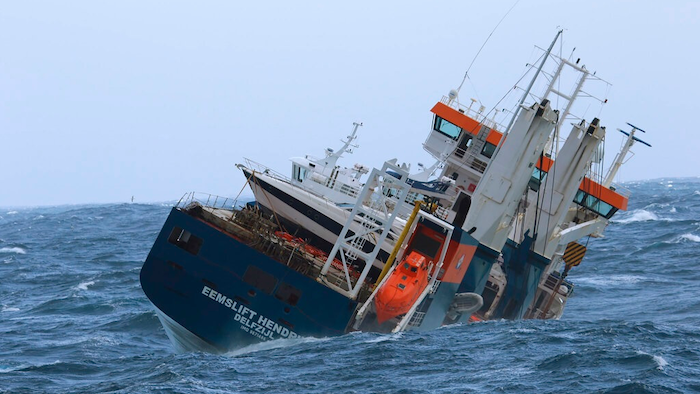 The unmanned Dutch cargo ship Eemslift Hendrika rolls in heavy seas, carrying heavy oil and diesel on board in the Norwegian Sea about 130 kilometers (80 miles) off the coast of Alesund. The crew was evacuated following a distress call from the vessel, and the Norwegian Coastal Administration said Tuesday they have dispatched a coast guard ship to inspect the situation.
Coast Guard Ship Sortland / NTB via AP

HELSINKI (AP) — Despite heavy seas, a joint Norwegian-Dutch salvage operation has managed to get an abandoned Dutch cargo ship under control off the coast of Norway and was towing the ship to port on Thursday.

Norwegian officials said the rescue operation of the Eemslift Hendrika, a Netherlands-registered ship designed to carry large boats, was completed early Thursday and the ship is slowly being towed to the western city of Alesund.

The ship's crew of 12 was rescued by helicopter late Monday after a power outage in its main engine. The Norwegian Coastal Administration, based in Alesund, launched salvage operation late Wednesday as it became clear that churning seas could make the drifting ship crash into the shore.

The vessel has substantial quantities of diesel and fuel in its tanks, which could have caused an environmental disaster. Norwegian maritime authorities issued an emergency alert late Wednesday and started preparations in case of an oil spill.

The Eemslift Hendrika was adrift in the area where the North Sea and Norwegian Sea meet. Salvage experts were lowered onto the sharply listing ship Wednesday to attach towing ropes to waiting tug boats.

One large boat aboard the deck of the 6-year-old cargo ship fell off in heavy seas Tuesday but was found by the Norwegian coast guard and secured to another tug boat.

Why you need to have a deep understanding of your customers.
Oct 8th, 2021
Follow Us
Most Recent