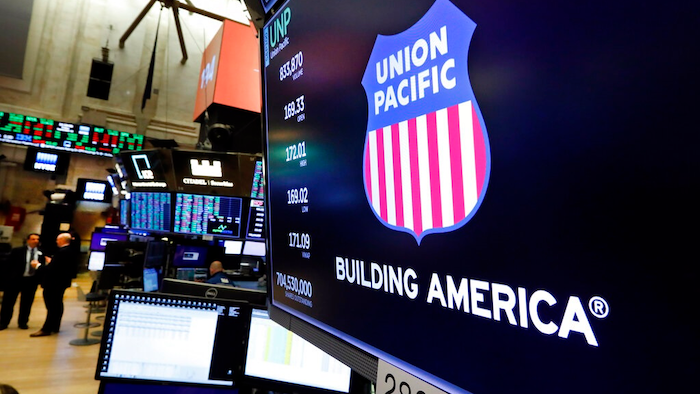 In this Sept. 13, 2019, file photo the logo for Union Pacific appears above a trading post on the floor of the New York Stock Exchange. Union Pacific’s fourth quarter profit chugged ahead as shipping volume improved for the first time since before the coronavirus pandemic slowed the economy to a crawl last year. The Omaha, Nebraska-based railroad said Thursday, Jan. 21, 2021, that it earned $1.38 billion, or $2.05 per share, in the quarter, but the results were weighed down by a one-time charge of $278 million.
AP Photo/Richard Drew, File

OMAHA, Neb. (AP) — Union Pacific's fourth-quarter profit chugged ahead as shipping volume improved for the first time since before the coronavirus pandemic slowed the economy to a crawl last year.

The Omaha, Nebraska-based railroad said Thursday that it earned $1.38 billion, or $2.05 per share, in the quarter. That was roughly in line with last year's $1.4 billion, or $2.02 per share, but this year's results were weighed down by a one-time $278 million charge. Without that charge, Union Pacific said it would have reported $1.6 billion net income, or $2.36 per share.

The results exceeded Wall Street expectations. The average estimate of seven analysts surveyed by Zacks Investment Research was for earnings of $2.25 per share.

The railroad posted revenue of $5.14 billion in the period, which met Street forecasts.

Union Pacific said volume grew 3% as the economy continued to recover from the worst of the pandemic. In last year’s second quarter, the number of shipments railroads handled plummeted more than 20% as many businesses and factories shut down as officials imposed restrictions to slow the spread of the coronavirus before rebounding sharply in the third quarter.

Strong growth in online shopping helped drive deliveries of shipping containers — known as intermodal shipping — up 12% to offset weaker areas during the quarter. CEO Lance Fritz said that growth could slow if consumers return to shopping in stores more once the pandemic eases.

“I’d love to see it continue. It’s important that it doesn’t fall dramatically when stores open back up. We’re not sure exactly what to expect,” Fritz said.

The railroad said it expects shipping volume to grow 4% to 6% overall in 2021 as the industrial section of the economy continues to slowly recover, but it didn't offer any profit forecast because the overall environment remains too uncertain because of the pandemic.

“Our team is energized about the prospect of an improving economy that only expands opportunity to win new business,” Fritz said.

It also expects to continue improving productivity over the next year as it streamlines its operations. During the quarter, Union Pacific limited its expense growth to to 1% even as it handled more shipments and recorded the one-time charge. It reported expenses of $3.14 billion, up from $3.11 billion a year earlier.

Edward Jones analyst Jeff Windau said the results show Union Pacific continues to get more efficient, which will help over the long run, but the outlook for the next year remains hard to predict because of questions about how quickly the economy will continue recovering during the pandemic.

Union Pacific's stock price fell nearly 4% Thursday to $209.75. The railroad's shares have risen almost 5% since the beginning of the year, while the S&P 500 index has increased almost 3%. The stock has climbed 20% in the last 12 months.

Union Pacific is one of the nation’s largest railroads, and it operates 32,400 miles (52,000 kilometers) of track in 23 Western states.