Gaza Factories Roar Back to Life to Make Protective Wear

It's a rare economic lifeline in the coastal territory. 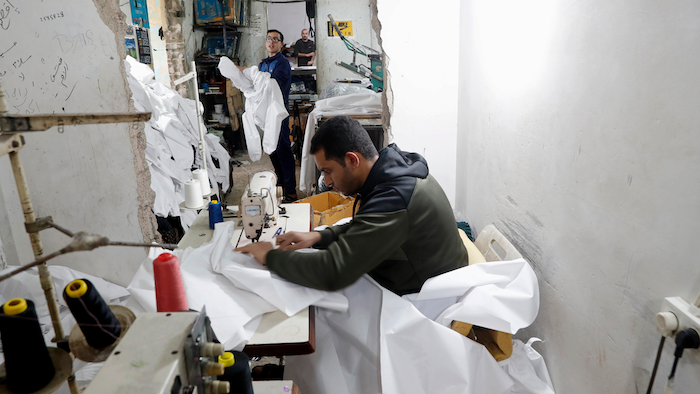 In this Monday, March 30, 2020 file photo, Palestinians make protective overalls meant to shield people from the coronavirus, to be exported to Israel, at a local factory, in Gaza City.
Associated Press

GAZA CITY, Gaza Strip (AP) — For the first time in years, sewing factories in the Gaza Strip are back to working at full capacity — producing masks, gloves and protective gowns, some of which are bound for Israel.

It's a rare economic lifeline in the coastal territory, which has been blockaded by Israel and Egypt since the Hamas militant group seized power from rival Palestinian forces in the strip in 2007. The blockade, and three wars between Hamas and Israel, have devastated the local economy, with unemployment hovering around 50%.

But the sudden opportunity also shows how Gaza's economy is at the mercy of those enforcing the blockade — and how depressed wages have become. Workers earn as little as $8 a day.

So far, Gaza appears to have been largely spared from the coronavirus pandemic, with only 17 cases detected, all within quarantine facilities set up for those returning from abroad. Many still fear an outbreak in the impoverished territory, which is home to 2 million people and where the health care system has been battered by years of conflict. But for now, authorities are cautiously allowing most businesses to stay open.

Rizq al-Madhoun, owner of the Bahaa garment company, said he has produced more than 1 million masks in the past three weeks, “all for the Israeli market.”

Gaza may not have the advanced machinery seen in other places, but he said residents' sewing skills are unmatched. "Gaza workers are distinguished in handiwork and they are better than workers in China or Turkey," he said.

Another factory, Unipal 2000, is able to employ 800 workers across two shifts to produce protective equipment around the clock.

Both factories import fabric and other materials from customers in Israel and then produce items like masks, gloves and surgical gowns. Unipal makes about 150,000 pieces a day, and demand is high as countries around the world grapple with shortages.

Asked about doing business with Israeli customers, both factory owners said they did not want to discuss politics and framed their work in terms of business and humanitarian needs.

“Despite the siege in Gaza, we export these masks and protective clothes to the whole world without exception," Bashir Bawab, the owner of Unipal 2000, said. “We feel we are doing a humanitarian duty.”

In recent years, Tamer Emad, a skilled textile worker, was able to work one week per month at best. But over the past month, he has been on the Unipal factory floor every day, earning around $8 per shift.

“This has provided us with a good opportunity ahead of Ramadan,” he said, referring to the Muslim holy month, which began Thursday, when families traditionally splurge on food and shopping.

Such wages are typical in the depressed Gazan economy, but would barely keep a family afloat. It costs around $250 a month to rent a two-bedroom apartment.

Omar Shaban, an economist who heads a local think tank, said the conditions created by the blockade allow for “exploitation,” but that low-wage jobs still provide income for many people.

Unipal 2000 first opened in an industrial zone along the frontier in 1998, when the peace process was in full swing. But like many other Gaza businesses, it was forced to shut down after the Hamas takeover and the blockade. Israel says the blockade is needed to prevent Hamas, an Islamic militant group that opposes Israel's existence, from arming itself.

Israel began easing some restrictions after the 2014 Gaza war, and the factory reopened two years later. But by then most of its clients had found suppliers elsewhere, so it only operated intermittently.

Its fortunes could change again — especially if there is an outbreak.

Gisha, an Israeli group that advocates for easing the blockade on Gaza, appealed to Israeli leaders to do more to promote economic activity in the territory.

“The pandemic has created demand for these products," it said. "But Israel must lift restrictions on trade entirely so that Gaza residents can work and so that Gaza’s faltering economy can brace itself as much as possible against the wider global crisis caused by the pandemic.”

The virus causes mild to moderate flu-like symptoms in most patients, who recover within a few weeks. But it is highly contagious and can cause severe illness or death, particularly in older patients or those with underlying conditions.

Israel has reported more than 14,800 cases and nearly 200 deaths. The Palestinian Authority, which governs parts of the occupied West Bank, has reported around 260 cases and two deaths. Both imposed strict lockdowns more than a month ago.

The Glia project, established by Tarek Loubani, a Palestinian physician based in Canada, has previously used 3D printers to produce inexpensive stethoscopes in the isolated territory. Last year it produced tourniquets for first responders to treat Palestinians shot and wounded by Israeli forces during weekly protests along the frontier.

“Because of the global shortages, we are trying to provide a resupply with alternatives from the local market,” said Mohammed Attar, of Glia team in Gaza.

The initiative currently produces 30 face shields a day and hopes to one day export them.