Target, Like Other Retailers, Did Not Have a Merry Christmas 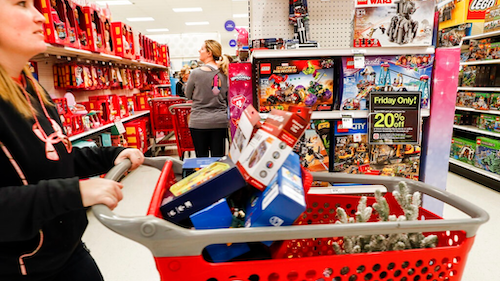 In this Nov. 23, 2018, file photo shoppers browse the aisles during a Black Friday sale at a Target store in Newport, Ky. Comparable stores sales at Target fell well below the previous year, joining a growing list of retailers reporting a meager performances during the critical holiday shopping season. Target said Wednesday, Jan. 15, 2020, that it had weaker-than-expected sales of electronics, toys and some home good. Those sales climbed 1.4% in the November-December period, compared with a 5.7% increase a year earlier.
AP Photo/John Minchillo, File

The company on Wednesday cut its expectations for sames-store sales growth for the entire quarter. Shares fell more than 7% before the opening bell.

Target Corp., based in Minneapolis, said it now foresees fourth-quarter comparable sales growth in line with the 1.4% increase it experienced during the holiday period. It had previously forecast a rise of between 3% and 4%.

Neil Saunders, managing director of research firm GlobalData Retail, said Target's holiday performance wasn't dire, as it was going to be tough for it to top its strong year-ago results. He also noted that the disappointing electronics and home sales were impacted by the timing of Black Friday, coming later this year.

“Overall, Target remains a good retailer on the right trajectory. It may have stumbled and slowed over the holidays, but it is still one of the most attractive runners in the retail race," Saunders wrote.

Seth Sigman of Credit Suisse agreed, saying that “there are many bright spots within that would point to this being more of a blip rather than the start of a new trend." The analyst said while comparable sales of toys were flat, the category likely gained share. He also noted solid sales gains in categories such as clothing, beauty and food and beverage.

Yet Target is just the most recent retailer to put up worse-than-expected sales numbers this year, and it cast a pall over the sector in early trading. The retail group was the worst performer on the S&P with less than an hour before markets opened.

J.C. Penney, Kohl's and L Brands, the parent company of Victoria's Secret, all reported holiday sales declines. Macy's reported a small decline in holiday sales, though it was better than what investors had expected.

Overall retail sales are expected to have increased for the holidays, boosted by a strong economy. But the divide between the winners and losers in retail is widening. Department stores, feeling pressure from Amazon have been speeding up their deliveries and rethinking their product lineups. Stores like T.J. Maxx, which offer deep discounts on coveted brands, also resonated with shoppers.