Jeff Schwager is wondering whether it truly makes sense to sell his company's cheese outside the U.S. 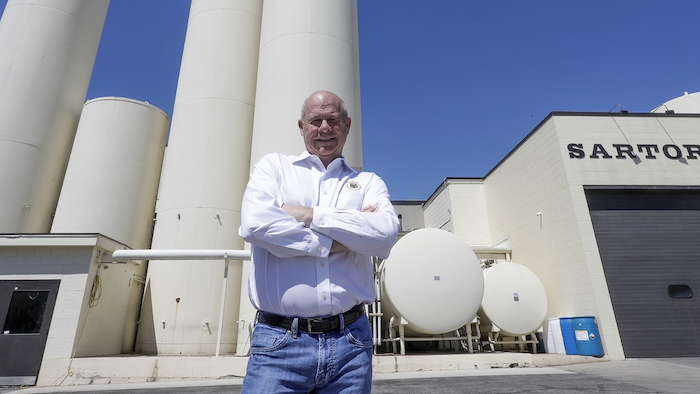 In this June 7, 2019, photo Jeff Schwager, president of Sartori Cheese poses for a picture at their plant in Plymouth, Wis. Image credit: AP Photo/Morry Gash

Jeff Schwager is wondering whether it truly makes sense to sell his company's cheese outside the U.S.

Schwager's company, Sartori, faced potential retaliatory tariffs from Mexico when President Donald Trump threatened nearly two weeks ago to reopen a trade war with Mexico to pressure its government to halt the flow of Central American migrants to the U.S. border. Sartori already had to deal with months of 25% Mexican tariffs in last year's trade dispute with the U.S. The Plymouth, Wisconsin-based company is also paying tariffs on sales to China, a result of the U.S. trade dispute with that country.

The combination cost $100,000 a month and Sartori was losing money on its business with China and Mexico. The pressure eased somewhat after the Mexican tariffs ended when the U.S., Mexico and Canada reached a new trade agreement in October. But the events of the past year have left Schwager with doubts.

"Uncertainty in this business/political environment has driven us to focus more growth on domestic opportunities rather than take chances on international growth," Schwager says.

Although Trump suspended the tariffs against Mexico, his unpredictable trade moves — including a hike in tariffs on Chinese goods last month — are making some small businesses increasingly uncertain about foreign trade. Even the prospect of tariffs has made some owners and investors reluctant to pursue deals. Importers have been searching for manufacturing alternatives in countries that aren't at odds with the U.S. Companies like Sartori are rethinking their export business.

The threat of tariffs "raises questions about the reliability of the U.S. as a trading partner," says Dwight Morgan, an executive vice president at M. Holland, a Northbrook, Illinois-based distributor of resin used in plastics. And that in turn breeds uneasiness about foreign trade among small businesses.

Uncertainty is part of running any business; companies can face natural disasters or the sudden loss of suppliers, hindering operations or sending costs sharply higher. But smaller companies without financial cushions and big staffs can be more vulnerable when faced with something disruptive, including tariffs that can raise a company's costs sharply. And despite Trump's halt of tariffs on Mexican goods last Friday, he almost immediately raised the possibility they could still be imposed if Mexico doesn't cooperate on border issues. On Monday, Trump reiterated a threat to impose more tariffs against China if the two countries fail to reach a deal he finds acceptable.

With the new 5% tariffs that Trump threatened against Mexico, business owners started thinking about their options and alternatives. "If you're a small business, you're thinking, what are the chances they're not going up to 10%? Should I be trying to get orders across the border right now?" says Neil Bradley, executive vice president and chief policy officer at the U.S. Chamber of Commerce. "It makes it difficult to plan."

"The back-and-forth makes me feel a little uneasy in regards to manufacturing in Mexico," says Kat Rosati, brand manager at Apparel Booster, a Los Angeles-based company that helps clothing companies find manufacturing facilities overseas. She's willing to take a chance on garments that can be manufactured quickly, but because the situation between Trump and Mexico seems unclear, Rosati doesn't want her clients to sign long-term production deals and end up paying tariffs down the road.

The ongoing trade dispute with China, which has led to 25% tariffs on thousands of consumer and industrial products imported into the U.S., has forced some small U.S. manufacturers to seek new homes for production. But even that strategy has potential pitfalls. Before Trump renewed his threats of tariffs on Mexico, Rosati says, some clients switched their production from China to Mexico "as a way to keep costs down, avoid the trade wars and have some predictability in their overall production costs."

Switching countries is also an expense in time and money. Owners have to find available factories that do quality work and can deliver on time. But some are looking at countries like Peru where costs are higher than Mexico, but that doesn't have trade and other issues with the U.S., Rosati says.

It's hard for any business to plan for the kind of uncertainty posed by a trade war, says Dennis Ceru, an adjunct professor of entrepreneurship at Babson College. Most small businesses can't afford to sharply increase inventories when costs go up significantly — doing so puts a company at risk of being stuck with a lot of unsold goods.

Lentine, whose business is based in Orlando, Florida, has been hit by the trade war with China, where some of his merchandise is manufactured, as well as the disagreements with Mexico, a big export market for his company.

"The uncertainty is massive for a company like mine," he says.

Many companies are forced to pass along the costs of the tariffs to their customers, but some absorb it. Sartori, facing competition in Mexico from domestic cheesemakers, split the extra 25% with its Mexican business partners last year, and took a hit to its profits.

Owners may have to cope with a trade war by raising prices and seeing reduced profit margins for a period of time, Ceru says.

"For most small and mid-sized companies, the best they can do is hunker down and do their best to survive."

In this June 7, 2019, photo Jeff Schwager, president of Sartori Cheese poses for a picture at their plant in Plymouth, Wis. Image credit: AP Photo/Morry Gash
Latest in Supply Chain