Michigan Gov. Rick Snyder hopes to use the final weeks of his tenure to lock in a deal allowing construction of a hotly debated oil pipeline tunnel beneath a channel linking two of the Great Lakes — a plan his successor opposes but may be powerless to stop. 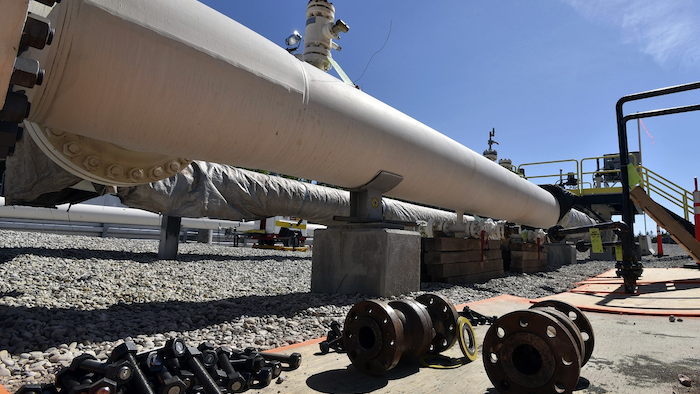 In this June 8, 2017, file photo, fresh nuts, bolts and fittings are ready to be added to the east leg of the pipeline near St. Ignace, Mich., as Enbridge prepares to test the east and west sides of the Line 5 pipeline under the Straits of Mackinac in Mackinaw City, Mich. Image credit: Dale G Young/Detroit News via AP, File

Michigan Gov. Rick Snyder hopes to use the final weeks of his tenure to lock in a deal allowing construction of a hotly debated oil pipeline tunnel beneath a channel linking two of the Great Lakes — a plan his successor opposes but may be powerless to stop.

The two-term Republican and his team are working on several fronts to seal an agreement with Canadian oil transport giant Enbridge for replacing the underwater segment of its Line 5, which carries about 23 million gallons (87 million liters) of oil and natural gas liquids daily between Superior, Wisconsin, and Sarnia, Ontario, traversing large sections of northern Michigan.

A more than 4-mile-long (6.4-kilometer) section, divided into two pipes, lies on the floor of the churning Straits of Mackinac, the convergence between Lakes Huron and Michigan. Laid in 1953, the twin pipelines have become a target of environmentalists, native tribes, tourism-related businesses and other critics who say it's ripe for a spill that could do catastrophic damage to the lakes and the regional economy.

While insisting they're in sound condition, Enbridge reached an agreement with Snyder's administration in October to decommission the pipes and drill a tunnel for a new line through bedrock below the straits. The project would take seven to 10 years and cost $350 million to $500 million, which Enbridge would pay.

Gov.-elect Gretchen Whitmer, elected this month, pledged during her campaign to shut down Line 5 and criticized the tunnel plan — as did fellow Democrat Dana Nessel, who won the race for attorney general. Both take office in January and have said the Snyder administration should not steamroll the plan to enactment in the meantime.

A spokeswoman for Nessel said she was "deeply concerned and troubled by the hasty legislative rush-to-judgment efforts to push through a proposal that has not been properly vetted, that handcuffs Governor-elect Whitmer and Attorney General-elect Nessel before they even take office, and will have negative repercussions on the state of Michigan and its residents for generations."

But Snyder's team is plowing ahead. Keith Creagh, director of the Department of Natural Resources, told The Associated Press this week that he expects the final steps to be completed before Snyder leaves office.

"This is not a rush to finish," Creagh said. "This is a culmination of four-plus years of looking at a very complex issue."

A Republican-backed bill to be considered during a lame-duck legislative session resuming Tuesday would designate the Mackinac Bridge Authority as owner of the tunnel, with responsibility for overseeing construction and managing its operations while leasing it to Enbridge and other potential users, such as electric cable companies. Snyder's office is also requesting $4.5 million for startup administrative costs and radar to monitor wave heights in the straits.

The seven-member bridge authority, whose sole responsibility since its creation in the 1950s has been to maintain the vehicular bridge that crosses the straits and links Michigan's two peninsulas, heard from supporters and opponents Nov. 8 but took no action . Its next scheduled meeting is in February, but Creagh said he hopes the group will convene before January to ratify the tunnel plan. Snyder recently filled four vacancies on the authority, giving his appointees the majority.

The authority's Democratic chairman, Patrick "Shorty" Gleason, signaled that he has little interest in calling a special meeting in December to accept oversight responsibility for the proposed structure before the governorship changes hands.

"If they think I or any member of the Mackinac Bridge Authority can be given an agreement with absolutely no negotiations or discussions with Enbridge and have it resolved within a couple weeks, there's no way that's possible," he said. Gleason said the incoming administration's views are "equally important," and he hopes Snyder and Whitmer discuss the issue.

Opponents hope concerns about altering the bridge agency's mission so significantly — raised even by people who don't necessarily oppose the tunnel — will persuade the panel to delay a decision.

William Gnodtke, the outgoing chairman who was appointed by former Republican Gov. John Engler, and seven other former members issued a statement saying the plan "would mean a major dilution of the authority's focus on the bridge" and "has the potential to seriously compromise its effectiveness in managing Michigan's single largest asset."

Gnodtke and current bridge authority member Barbara Brown are among leaders of the newly formed Friends of Mackinac Bridge, which will lobby state officials to slow things down and establish a separate agency to manage the tunnel if one is built, said Jim Lively of the Traverse City-based Groundworks Center for Resilient Communities.

For Love of Water, an environmental group, contends the plan would expose the bridge authority to financial and legal liability in the event of a rupture or other disaster, despite a provision in the agreement that Enbridge would pony up at least $1.8 billion to deal with potential spills.

"We're living in a moment of energy transition and the idea of building a tunnel under the Great Lakes for a foreign oil company to use for the next century has not been given the forethought and due diligence that the public demands," executive director Liz Kirkwood said.

Creagh said the bridge authority was the logical choice to oversee the tunnel.

"They have an impeccable record, they've done a great job with the bridge," he said. "They've been bipartisan, looked out not just for the bridge, but for the straits."

Enbridge spokesman Ryan Duffy declined to speculate about the fate of the agreement if it isn't completed before Whitmer becomes governor.

"We believe now is the time to build for the future," Duffy said. "That's what our agreement with the state is about — protecting the straits and having energy independence." 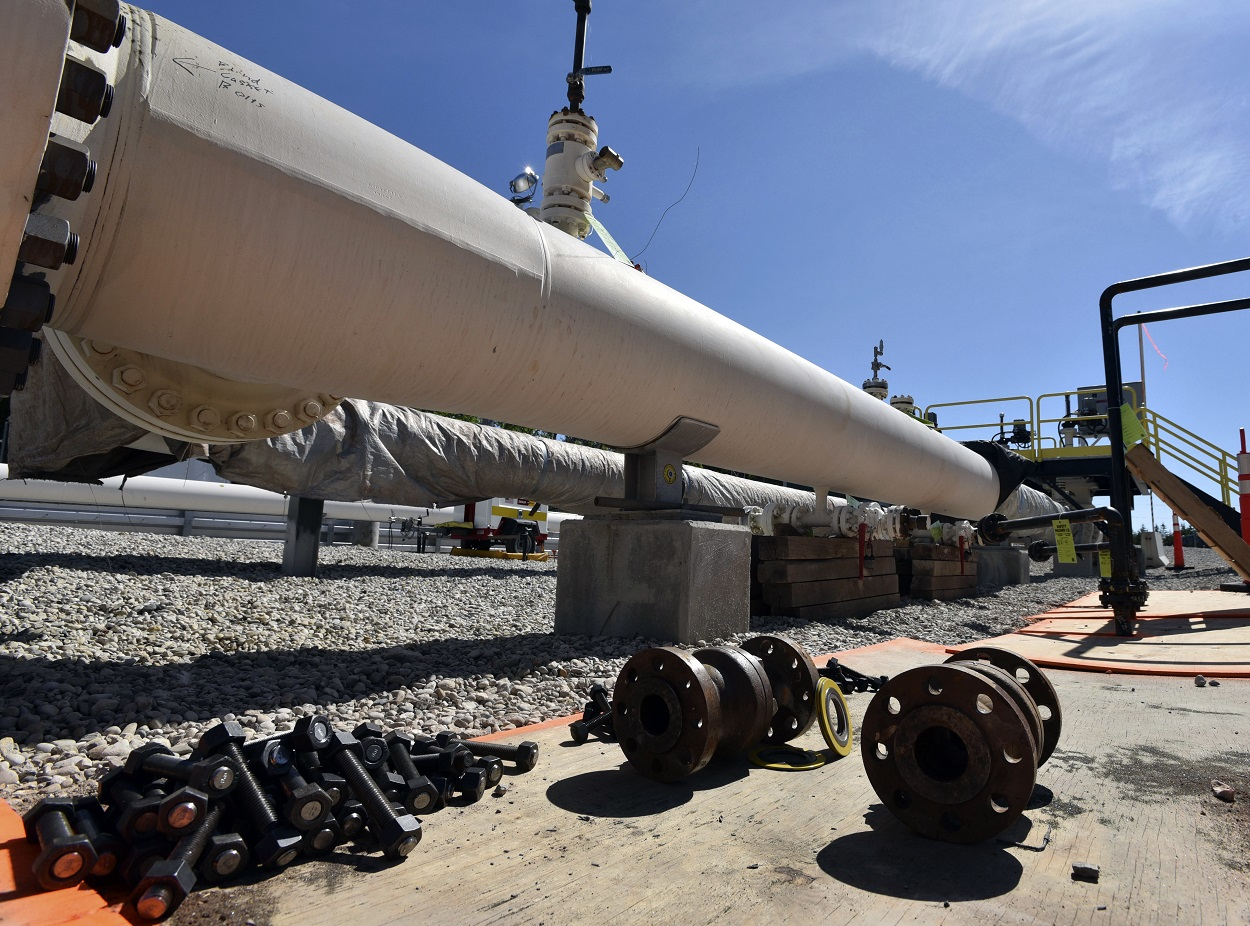 In this June 8, 2017, file photo, fresh nuts, bolts and fittings are ready to be added to the east leg of the pipeline near St. Ignace, Mich., as Enbridge prepares to test the east and west sides of the Line 5 pipeline under the Straits of Mackinac in Mackinaw City, Mich. Image credit: Dale G Young/Detroit News via AP, File
Latest in Supply Chain