The value of stocks, crude oil and the European currency will likely fall this week as investors worry about what the Paris terror attacks will do to consumer confidence and key parts of the global economy. 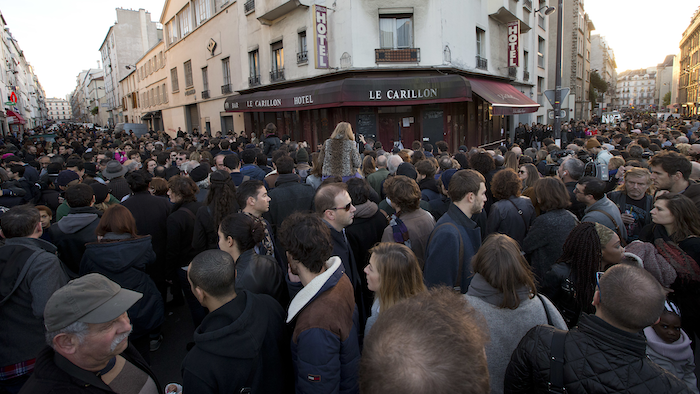 NEW YORK (AP) — The value of stocks, crude oil and the European currency will likely fall this week as investors worry about what the Paris terror attacks will do to consumer confidence and key parts of the global economy.

The public nature of the targets — cafes, a stadium and a concert hall — could make travelers hesitant about visiting Paris or other major cities. A decline in tourism in Europe could weaken the euro, while oil prices could fall on fears that demand will drop. The attacks also could hurt major airlines in the U.S., Europe and Asia.

Friday night's suicide-bombing attacks, which left 129 people dead and more than 350 injured, come as investors are already nervous about slowing economic growth in China and the future of the eurozone.

Many analysts believe any economic impact will be short.

"As horrific as these events are — and this is truly awful — economic activity does tend to be pretty resilient," said Howard Archer, an IHS Global Insight analyst in the United Kingdom. "At the end of the day, people have to get on with their lives."

Sam Stovall, U.S. equity strategist for S&P Capital IQ, said the U.S. stock market will likely fall about 2 percent Monday, with larger declines in Europe. But he said "it's not something that's going to throw the European economy into recession." Based on the reactions to similar attacks in the past, Stovall expects stocks to begin recovering after about a week.

Shane Oliver, chief economist at AMP Capital, said the U.S. market took just over a month to recover from the Sept. 11, 2001, attacks, while the U.K. market rebounded in one day after the 2005 London bombings.

EFFECTS ON TRAVEL AND CRUDE OIL

Because the attacks aren't near oil fields, production isn't likely to be affected. But demand for gasoline and jet fuel could fall as people cut back on travel. That means oil prices could fall further, even as they already were approaching last summer's six-year lows of below $40 per barrel.

France is among the top tourist destinations in the world, so airline revenue and stocks could be hit. But people might switch trips to the U.S., which could partially offset Europe declines.

Oil supplies and prices could be affected if NATO allies go to war against the Islamic State in Iraq and Syria and if ISIS interrupts the flow of oil with attacks on Saudi or Iraqi oil production or shipping in the Suez Canal.

But Tom Kloza, global head of energy analysis for the Oil Price Information Service, said ISIS so far has not threatened oil fields or supplies. Unless that changes, oil prices should stay low for at least the next few months because there is an oversupply worldwide.

Before the attacks, investors already were nervous about economic slowdowns in China and Europe. In addition, there were jitters in the U.S. even though its economy appears stronger than the rest of the world. Last week, U.S. stocks suffered their first weekly decline after six straight weeks of gains.

In China, mainland stock markets are typically affected by government policies rather than the economy. Chinese stocks already were likely to drop Monday after the government tightened limits Friday on lending to finance stock purchases, thereby cutting speculative trading.

Ablin has concerns about broader economic and social problems within the European Union. He said countries might react to the attacks by tightening borders, even though they need young immigrants to fill jobs.

"The European Union and the eurozone were designed under more or less placid times," Ablin said. "Now, it's coming under duress from a lot of different angles."