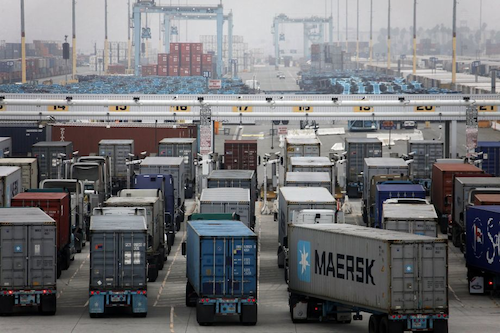 Truck drivers walked off the job Monday at the nation's busiest port complex amid an ongoing dispute over their classifications as independent contractors.

The union accused those companies of "persistent wage theft" since they classify drivers as contractors rather than employees. Teamsters spokeswoman Barb Maynard said the distinction forces drivers to pay for their own expenses and can effectively drop their pay below minimum wage.

The drivers called for the companies to reclassify them as employees with a right to union representation. Teamsters officials said 500 port truckers previously filed wage claims with the California labor officials with most resulting in favorable rulings for the drivers.

A labor peace agreement with Green Fleet Systems averted a strike against a fifth company, according to the union.

The strike could enable picketing at facilities throughout Southern California, including as far south as the border with Mexico and extending into the Inland Empire east of Los Angeles. The walkout, however, affects only a fraction of the roughly 16,000 drivers that work the port complex and should not dramatically affect trade.

The strike follows a protracted contract dispute between the dockworkers and port officials on the West Coast, which resulted in virtual gridlock at some of the nation's business ports.

Weston LaBar, executive director of intermodal transportation group the Harbor Trucking Association, said most truckers at the ports "prefer to remain independent contractors because they know they have a greater opportunity to make a decent income, and they have greater flexibility over the hours in which they work."