Federal Reserve Chair Janet Yellen said Tuesday that the central bank still expects to raise interest rates gradually this year. But she said the Fed also recognizes the dangers of waiting too long to tighten credit. 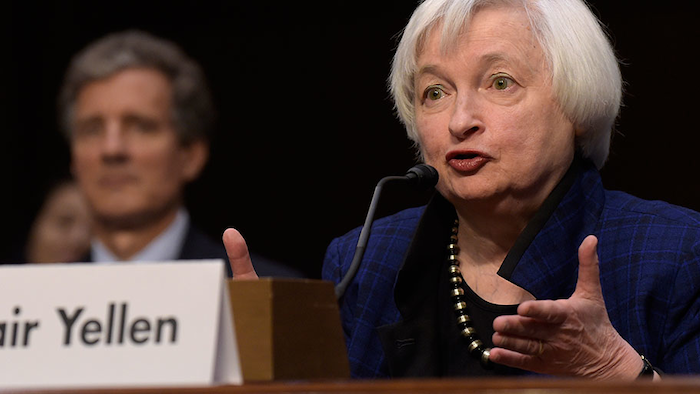 Testifying to Congress for the first time since President Donald Trump took office, Yellen referred implicitly to the ambitious economic program Trump has promised. She said the Fed recognizes that sharp changes in tax policy and government spending could influence the central bank's decisions.

But she says "it's too early to know what policy changes will be put in place or how their economic effects will unfold."

Trump's program is expected to include deep tax cuts, stimulus spending and deregulation. His initiatives are intended to achieve his goal of doubling growth to around 4 percent, up from the anemic 2 percent pace that prevailed since the Great Recession ended in 2009.

In her testimony, Yellen delivered a message that reflected essentially what the Fed said in its most recent policy statement on Feb. 1: The economy and job markets have strengthened, and inflation is edging up, closer to the Fed's 2 percent target.

Though the central bank still thinks rate hikes can occur slowly, Yellen added a note of caution Tuesday: "Waiting too long to remove accommodation would be unwise, potentially requiring the (Fed) to eventually raise rates rapidly, which could risk disrupting financial markets and pushing the economy into recession."

"At our upcoming meetings," the Fed chair said, the central bank "will evaluate whether employment and inflation are continuing to evolve in line with (the Fed's) expectations, in which case a further adjustment of the federal funds rate would likely be appropriate."

In December, the Fed modestly raised its benchmark short-term rate to a range of 0.5 percent to 0.75 percent, its first increase since December 2015. Until then, the Fed had left its key rate unchanged at a record low near zero for seven years to energize an economy pummeled by the most severe recession in decades. In December, the Fed also forecast that it would raise rates three times in 2017.

Many economists caution that the pace of rate increases could change quickly depending on how much success Trump has in getting his economic initiatives enacted.

Trump has said his goal is to double economic growth, as measured by the gross domestic product, from the lackluster 2 percent annual rate that's prevailed since the Great Recession ended in 2009 to a robust 4 percent rate or better. Comments he made late last week reiterating his commitment to major tax relief helped drive up stock indexes to fresh record highs.

But Fed officials could grow concerned that a big stimulus package at this stage of the recovery, with job growth solid and unemployment below 5 percent, might overheat the economy and trigger unwanted inflation pressures. If that were to happen, the central bank could decide to accelerate its rate hikes.

Yellen is testifying Tuesday to the Senate Banking Committee and will do so Wednesday to the House Finances Services Committee. She is likely to face questions about a key Republican priority: To undo much of the Dodd-Frank financial regulatory law, which was intended to curb the kind of excessive risk taking in the banking system that fueled the 2008 financial crisis. Yellen has been a staunch defender of the law. But Trump and his allies argue that the law has imposed too many constraints on banks, thereby slowing lending and economic growth.

Beyond Dodd-Frank, Yellen could be pressed about Republican efforts to diminish the Fed's independence, in part by subjecting it to more intensive audits. With a Republican in the White House, those efforts now stand a greater chance of success.

Trump now also has the opportunity to fill three vacancies on the Fed's seven-member policymaking board after Daniel Tarullo, a board member who was guiding the Fed's regulatory efforts, announced Friday that he would resign this spring. With Tarullo's exit and the selection of a successor, Trump and likeminded Republicans in Congress could be able to soften the Fed's approach to regulation.