For ECB And Fed, Trump Complicates Decisions On Rate Policy

Donald Trump's surprise election victory has helped solidify expectations for an interest rate increase next month by the U.S. Federal Reserve — but may have complicated a decision for the European Central Bank, which faces a difficult choice over more stimulus. 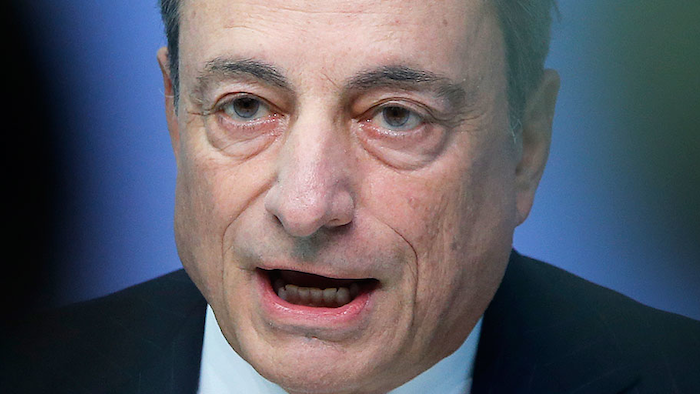 FRANKFURT, Germany (AP) — Donald Trump's surprise election victory has helped solidify expectations for an interest rate increase next month by the U.S. Federal Reserve — but may have complicated a decision for the European Central Bank, which faces a difficult choice over more stimulus.

For the ECB, the issue is what to do about its bond-buying program, which pumps new money into Europe's struggling economy each month to try to accelerate growth and inflation.

The Fed and the ECB — two of the world's most important central banks — will be making its policy decisions before Trump is inaugurated Jan. 20, while still weighing what he might do as president.

At its meeting Dec. 8, the ECB must decide whether to keep its money spigot open or slowly start closing it by reducing, or tapering, the bond purchases. Uncertainty about the policies Trump will pursue — and whether, and by how much, they might help spur global growth — has made the ECB's decision more difficult. Some analysts think the ECB will decide to extend its bond buying program by at least six months beyond its scheduled end in March.

For the Fed, the question is whether to follow through on expectations that it will raise interest rates when its next policy meeting ends Dec. 14. It would be the Fed's first move since it raised its key short-term rate from a record low late last year, and it would reflect a strengthened U.S. economy that is able to absorb higher borrowing rates.

At first, Trump's victory caught investors off guard and suddenly intensified uncertainty about how the Fed might respond. The still-unclear details of the president-elect's economic priorities added a new consideration for the Fed. But in part because of the calm that's prevailed in stock markets since the election, traders have put the likelihood of a rate hike next month at 81 percent, according to the CME Group.

Most investors expect Trump's efforts to stimulate the U.S. economy to produce higher debt, higher inflation and higher rates — all negatives for bonds. In response, they've been yanking money out of bonds, sending prices tumbling and wiping out months of gains. The prospect of higher inflation, in fact, is another reason the markets expect the Fed to follow through on raising rates in December.

Some of Trump's ideas, such as spending $1 trillion on tunnels, bridges, roads and ports, and removing some regulations, could boost growth. Such prospects — uncertain as they are — have already lifted stock prices for companies that would benefit, such as construction equipment maker Caterpillar.

And if the idea of infrastructure spending catches on in Europe, it could help the economy there too, particularly in the 19-country eurozone. Since the global financial crisis, the monetary union has focused largely on cutting spending. That helps reduce debt but also puts a brake on economic growth.

Members of the euro face rules restricting debt and deficits. But the will to enforce the rules seems to have weakened even before the U.S. election, with the European Commission giving Portugal, for example, more time to bring its deficit into compliance.

The ECB's stimulus has wide-ranging implications for investors, savers and companies. Ultra-low interest rates — one product of the stimulus — have reduced returns on savings, pushed investors into riskier markets like stocks and real estate, and increased pressure on pension programs. Low rates have also weakened the earnings of banks, making some more hesitant to issue loans, which are vital to economic growth.

The ECB's decision was already complicated by having to weigh the benefits of more stimulus against those side effects. Economists Joerg Kraemer and Marco Wagner at Commerzbank are among those who think the ECB will be under pressure to extend the stimulus. Their reasoning: More and more voters in Europe, too, are turning against the political establishment.

That means the ECB would be left with the burden of helping the economy through its stimulus programs and low rates, the two wrote in a research note.

Others, like Ben May, an economist at Oxford Economics, argue that a steady improvement in the eurozone economy could lead the ECB to announce a tapering of its stimulus program or put off its decision for a month. The number of unemployed is steadily falling. Inflation has crept up to 0.5 percent in October, far from the ECB's goal of just under 2 percent, but better than the negative readings as recently as May.

The calendar of political events, however, suggests the euro currency union could be in for more shocks.

— A referendum on constitutional changes in Italy on Dec. 4 — four days before the ECB decision — could, if rejected, topple the government.

— A repeat runoff election for president of Austria on the same day could bring right-wing populist Norbert Hofer of the Freedom Party into office.

— British Prime Minister Theresa May wants to start by the end of March the official talks to bring the country out of the European Union. Britain is not in the euro, but is a major trade partner, and the talks on its exit could shake confidence.

— In France, two rounds of voting for president in April and May could see National Front leader Marine Le Pen make the second round. The National Front wants to leave the European Union and restrict immigration.

All that uncertainty could depress business activity as people await the outcome of the votes, says IHS Global Insight economist Howard Archer. He thinks the ECB will extend its 1.74 trillion euro ($1.9 trillion) bond-buying program by six months at the current rate of 80 billion euros a month:

"It makes an already uncertain political landscape for the eurozone in 2017 look even more uncertain...that could lead to increasing business caution and make growth that little bit more difficult."