Investors, at least, suddenly seem more confident about what the Federal Reserve will announce when it meets next week: Nothing. 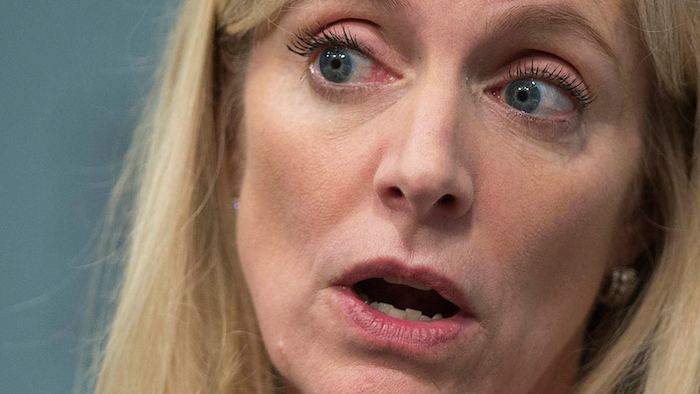 WASHINGTON (AP) — Investors, at least, suddenly seem more confident about what the Federal Reserve will announce when it meets next week:

Stocks soared Monday after an influential Fed policymaker indicated she was in no hurry to raise interest rates despite intensified speculation that the Fed is poised to tighten U.S. borrowing rates.

After the speech by Lael Brainard, investors pegged the chance of a rate hike next week at just 15 percent, down from 24 percent before her remarks, according to figures from the CME Group.

As a governor on the Fed's board in Washington and a close ally of Chair Janet Yellen, Brainard is seen as a key figure at the central bank. No governor has been on the losing side of a Fed vote since 2005. Presidents of the Fed's regional banks are far more likely to cast dissenting votes.

Financial markets had been on edge after several Fed officials in recent days had signaled a willingness to resume raising rates when they meet next week. Low rates have fueled a steady rise in stock prices. Until the recent comments, investors had expected the Fed to delay a rate hike until December or later.

Brainard is among the Fed's top "doves" — officials who tend to think the central bank should be cautious about raising rates out of concern that higher rates could stifle borrowing, spending and growth.

Had she signaled a change of heart, it might have convinced investors that a hike was coming next week, especially after another perceived dove, Eric Rosengren of the Federal Reserve Bank of Boston, signaled a willingness to raise rates as soon as this month. Rosengren's comments — and anxiety about what Brainard might say — had sent stocks tumbling Friday.

"She should be ashamed of herself," the Republican presidential nominee said on CNBC.

Asked about Trump's remarks, Brainard said Congress created the Fed to be independent of the executive branch and empowered it to pursue maximum employment and price stability.

"The institution is designed to ensure independence from the executive branch," Brainard said.

The Fed raised the short-term rate it controls in December for the first time since 2006. More rate hikes were expected to follow early this year, but the Fed has held off.

The global economy has been sputtering. A sharp deceleration in the Chinese economy has periodically rattled markets. And U.S. economic growth has been sluggish since late last year, dragged down by the worldwide troubles and by a strong dollar that's made U.S.-made goods pricier overseas.

In her speech, Brainard cited the global problems as a reason to be cautious about raising U.S. rates.

"The fallout from adverse foreign shocks appears to be more powerfully transmitted to the U.S. than previously," she said.

Brainard also noted that annual U.S. inflation has been coming in below the Fed's 2 percent target.

Some Fed watchers think investors have it wrong: They say Brainard is in the minority on the central bank's policymaking board and that the Fed will vote to raise rates next week.

"We still expect a September hike and expect the majority of voting members to support it," Laura Rosner, an economist with BNP Paribas, wrote in a research note.

In a speech earlier Monday, Dennis Lockhart, head of the Fed's regional bank in Atlanta, said he still held the view he expressed last month at a Fed gathering at Jackson Hole, Wyoming: That economic conditions justified consideration of a rate hike in September.

"I am satisfied at this point that conditions warrant that serious discussion," he said.

Lockhart isn't among the 10 voting members of the Fed's interest-rate setting panel this year. But he does take part in the discussions.

Despite her suggestion that it may be too soon for the Fed to resume raising rates, Brainard agreed in her speech that by most measures, the U.S. job market is steadily improving.

"We are continuing to move toward full employment, but that progress has been, and likely will be, somewhat gradual," she said.

Employers have added a solid 204,000 jobs a month over the past year. And the unemployment rate has dropped to a healthy 4.9 percent.

But U.S. economic growth stalled last year. The economy expanded at an unimpressive 1.1 percent annual pace from April through June after growing just 0.8 percent in the first quarter and 0.9 percent in the fourth quarter of 2015.