A burst of hiring in June provided a reassuring sign that the U.S. economy will likely withstand global weakness that may be magnified by Britain's decision to leave the European Union. 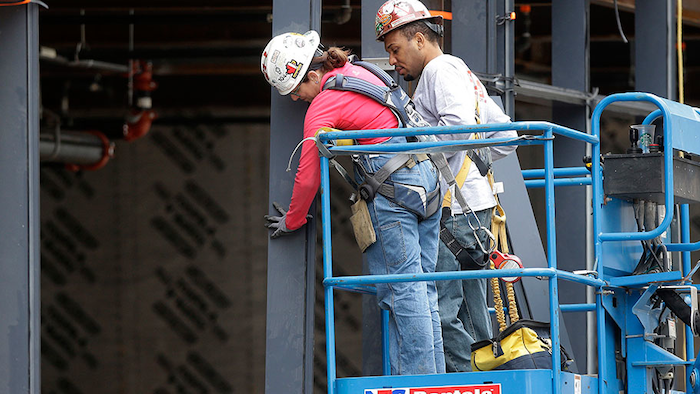 WASHINGTON (AP) — A burst of hiring in June provided a reassuring sign that the U.S. economy will likely withstand global weakness that may be magnified by Britain's decision to leave the European Union.

Last month's gain — 287,000 jobs, the most since October 2015 — showed that employers shook off a hiring slump in April and May and suggested that the economy will continue to grow steadily.

May's scant job gain of 11,000 and April's modest 144,000 increase had raised fears that the job market was weakening after months of solid growth. The United Kingdom's "Brexit" vote late last month to bolt the European Union escalated concerns that the global economy could slip into a recession and that the United States would be affected.

The June hiring figures, released Friday, were calculated before the Brexit vote. But the robust job growth served as a reminder that through much of the U.S. economy's seven-year recovery from the Great Recession, it has repeatedly withstood crises and recessions overseas.

"We still rank among the best among the industrial economies," said Patrick Newport, an economist at IHS Global Insight said. "We're about the only ones doing OK right now."

The economy had expanded at just a 1.1 percent annual pace in the first three months of the year. But rising consumer spending, a recovering housing market and further strong job gains could accelerate growth in the coming months.

The unemployment rate did rise to 4.9 percent in June from 4.7 percent in May. But that occurred mainly for an encouraging reason: More Americans sought jobs — a sign of growing confidence — though most didn't immediately find work. The government counts people as unemployed only if they're looking for a job.

A healthy job market, if sustained, could complicate Donald Trump's efforts to portray the U.S. economy as faltering. The presumptive Republican presidential nominee had referred to May's weak jobs report as a "bombshell" but didn't comment on Friday's report.

Hillary Clinton, the likely Democratic nominee, hasn't campaigned heavily on the economy's strength, focusing instead on the stagnation of middle class incomes. This week, she proposed measures to reduce college costs.

The campaign will intensify in coming weeks, with the Republican convention starting in 10 days and the Democrats' convention following a week later.

Friday's report painted a broadly encouraging picture. The number of part-time workers who would prefer full-time jobs fell sharply. And hiring occurred in both higher and lower-paying sectors. Manufacturers added 14,000 jobs, the most since January. Professional and business services, a category that includes accountants, engineers and architects as well as temporary workers, gained 38,000. Retailers added nearly 30,000, health care over 58,000.

The improved figures probably aren't enough to significantly revise the Federal Reserve's outlook. During their June meeting, Fed officials had cited weak hiring as a reason for postponing a resumption of interest rate hikes.

That signaled a shift from their April meeting, when many policymakers indicated they were prepared to raise rates if the job market and the economy continued to improve.

In December, the Fed modestly raised the short-term rate it controls after pinning it near zero for seven years. Most economists expect the Fed to remain cautious as it gauges the impact of the Brexit vote and to delay the next increase, perhaps until December or later.

Still, the U.S. economy is much less dependent on exports than many developed countries and therefore less exposed to slowdowns in the European Union.

Ethan Harris, an economist at Bank of America Merrill Lynch, said that even a recession in the U.K. would likely have a "tiny" impact on the U.S. economy.

"The spillovers from Brexit are pretty small," Harris added. "The U.S. economy kind of just plods its way through one (crisis) after another."

With the unemployment rate below 5 percent and hiring solid, average hourly pay is creeping higher. It rose 2.6 percent in June from 12 months earlier. That's above the 2 percent pace that persisted for most of the recovery but still a percentage point below the historical trend in a healthy economy.

Brett Schulman, CEO of Cava Grill, an 18-restaurant chain mostly in Maryland, Virginia and California, says his company raised its starting wage to $13 an hour this week, partly to keep and attract workers. Those making more than that will also receive raises. The move will boost pay for 620 of its 680 employees.

Some of the company's cooks have been lured away by other restaurants offering higher pay, Schulman said. By offering higher wages and better benefits, Cava Grill hopes to limit future departures.

Brian Krenke, president of furniture manufacturer KI, said his firm has had to raise pay 5 percent to 10 percent for hard-to-fill positions such as tool and die technicians. Five of its eight North American factories are in Wisconsin, Krenke said, where the unemployment rate is just 4.2 percent.

"You can imagine how difficult it is to try to identify talented workers and bring them in," he said.