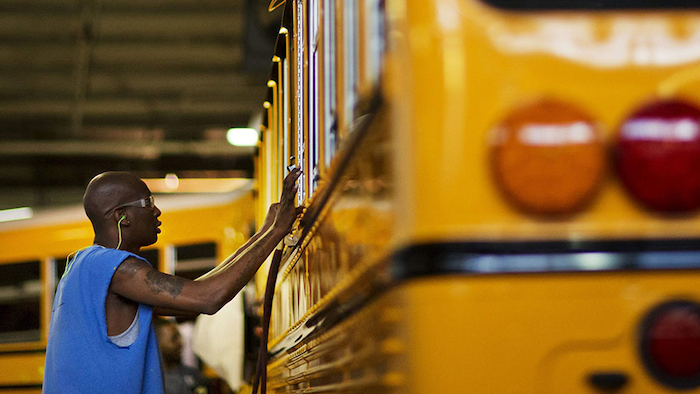 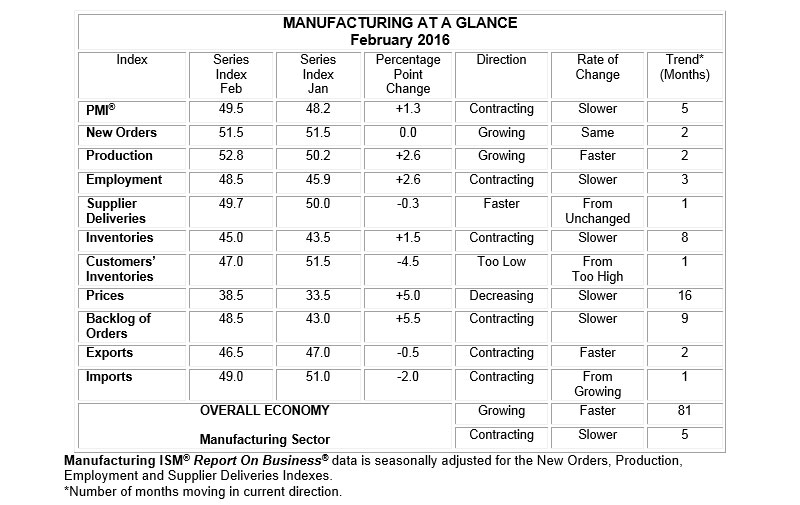 Bradley J. Holcomb, CPSM, CPSD, chair of the Institute for Supply Management Manufacturing Business Survey Committee states, “The past relationship between the PMI® and the overall economy indicates that the average PMI for January and February (48.9 percent) corresponds to a 1.8 percent increase in real gross domestic product (GDP) on an annualized basis. In addition, if the PMI for February (49.5 percent) is annualized, it corresponds to a 2 percent increase in real GDP annually.”

ISM’s New Orders Index registered 51.5 percent in February, the same percentage as registered in January, indicating growth in new orders for the second consecutive month. A New Orders Index above 52.2 percent, over time, is generally consistent with an increase in the Census Bureau’s series on manufacturing orders (in constant 2000 dollars).

ISM’s Production Index registered 52.8 percent in February, which is an increase of 2.6 percentage points when compared to the 50.2 percent reported for January, indicating growth in production in February for the second consecutive month. An index above 51.3 percent, over time, is generally consistent with an increase in the Federal Reserve Board’s Industrial Production figures.

“I think the New Orders number represents some pent up demand starting to emerge,” explains Holcomb. “We’ve had a soft start for the year, but the underlining demand is still there and its starting to show up again. Production simply has to follow suit in order to materialize those new orders into product.”

The Inventories Index registered 45 percent in February, which is an increase of 1.5 percentage points when compared to the 43.5 percent reported for January, indicating raw materials inventories are contracting in February for the eighth consecutive month. An Inventories Index greater than 42.8 percent, over time, is generally consistent with expansion in the Bureau of Economic Analysis (BEA) figures on overall manufacturing inventories (in chained 2000 dollars).

“The Inventories number represents a very lean approach to carrying inventories,” says Holcomb. “This trend started last year as managers wanted to close the books with low inventories, but it’s continued in that same vain, waiting for direction to see which way the economy was going. Now that we see new orders growing for two consecutive months that inventories number is very likely to start heading upwards as we go forward.”

ISM’s New Export Orders Index registered 46.5 percent in February, which is a decrease of 0.5 percentage point when compared to the January reading of 47 percent, and indicates contraction in the New Export Orders index for the second consecutive month.

“I see some very pleasant, very positive changes in the list and the only areas of any real concern are Exports being down — which is more of the same story due to the high price of the dollar,” explains Holcomb. “It’s not driving our economy. Imports of raw materials will start to come back up as new orders continue to poor in and we require those inventories.”

ISM’s Imports Index registered 49 percent in February, which is 2 percentage points lower than the 51 percent reported in January, and indicates contraction in imports in February.

The ISM Prices Index registered 38.5 percent in February, which is an increase of 5 percentage points when compared to the 33.5 percent reported for January, indicating a decrease in raw materials prices for the 16th consecutive month. In February, 9 percent of respondents reported paying higher prices, 32 percent reported paying lower prices, and 59 percent of supply executives reported paying the same prices as in January. A Prices Index above 52.4 percent, over time, is generally consistent with an increase in the Bureau of Labor Statistics (BLS) Producer Price Index for Intermediate Materials.

“Raw materials pricing has been decreasing for 16 consecutive months and are now decreasing at a slower rate,” says Holcomb. “If we look at our list of commodities moving up and down in price, I see something very interesting that could very well signal a turning point. We’ve been tracking a number of metals and plastics over many months on the ‘down-in-price’ list, but now some of our respondents are indicating that those commodities are going up in price for them. If I was a buyer of those materials, I would look and see if this is a good time to place those orders and contracts with the thought that we’ve bottomed out on prices and they could be about to rise.”

ISM’s Employment Index registered 48.5 percent in February, which is an increase of 2.6 percentage points when compared to the 45.9 percent reported for January, indicating contraction in employment for the third consecutive month, but at a slower rate of contraction than in January. An Employment Index above 50.6 percent, over time, is generally consistent with an increase in the Bureau of Labor Statistics (BLS) data on manufacturing employment.

“This month’s report is an overall positive view if you not only look at the numbers, but the comments from the panel which are more positive this month over last month on the whole,” adds Holcomb. “The numbers are pointing in the right direction, suggesting that the economy is growing and growing well for 81 consecutive months. It says that a PMI below 50 could be a passing phase for manufacturing that will be over soon.”