Orders for durable goods rose 3 percent in October following declines in both September and August, the Commerce Department reported Wednesday. 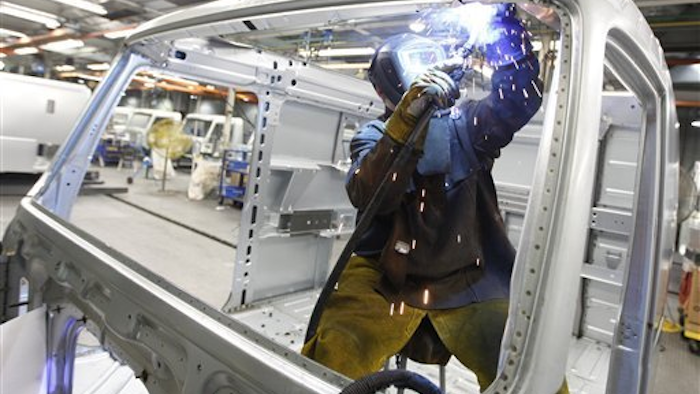 WASHINGTON (AP) — Orders for long-lasting manufactured goods posted a solid gain in October after two months of weakness, while a key category that tracks business investment plans advanced by the largest amount in three months.

Orders for durable goods rose 3 percent in October following declines in both September and August, the Commerce Department reported Wednesday. The strength was led by a surge in demand for commercial aircraft but reflected widespread gains in a number of categories, from machinery to computers. A key category that serves as a proxy for business investment spending rose 1.3 percent in October, the best showing since July.

American manufacturers have struggled this year with weakness in many key export markets and a strong dollar, which makes U.S. goods less competitive.

Reflecting the struggles manufacturers have faced this year, total orders for durable goods, items expected to last at least three years, were down 4.2 percent for the 10 months ending in October, compared to the same period a year ago.

For October, orders for commercial aircraft shot up 81 percent after a 32.2 percent plunge the previous month. Orders for autos and auto parts 2.9 percent in October.

Demand for machinery increased l.6 percent in October while orders for computers and related products rose 5.5 percent and demand for primary metals such as steel increased 0.4 percent.

U.S. manufacturers have seen export sales suffer this year because of economic weakness in such key export markets as Europe and China. In addition, a strong dollar has made American products less competitive in comparison to foreign producers.

The hit to the U.S. economy has been softened by the fact that consumer spending, which accounts for 70 percent of economic activity, has remained strong this year.