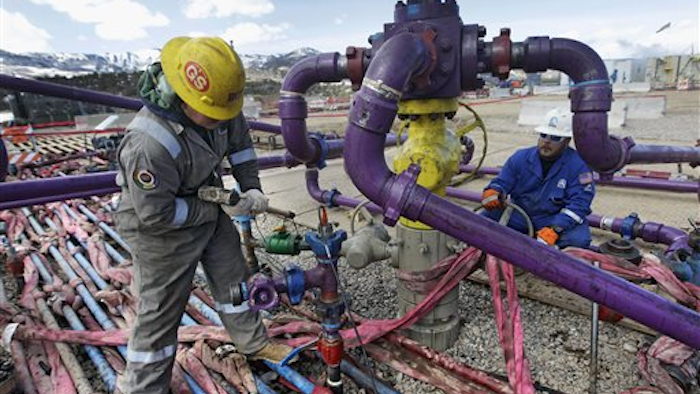 The Oil and Gas Conservation Commission, which regulates drilling, is considering two rules that would give regulators and local governments more of a say in the location of large oil and gas facilities in "urban mitigation areas," generally 1,000 feet from clusters of occupied buildings.

They would allow local governments to consult with energy companies on the location of large facilities, but they wouldn't be able to impose their own rules — only state regulations would apply. The proposals also would allow regulators to require companies to reduce the impact that big facilities have on people nearby.

Energy company representatives have said the rules go too far and could hurt the state's important oil and gas industry. Colorado is the seventh-largest energy-producing state.

The rules were among a handful of recommendations by a task force convened by Gov. John Hickenlooper to address tensions between the state's growing cities and the industry.

Concern about the potential health and environmental effects of hydraulic fracturing, or fracking, has heightened the conflicts. Fracking injects a high-pressure mix of water, sand and chemicals underground to stimulate the flow of oil and gas into wells. The industry says it's safe.

Bernie Buescher, a member of the task force who wrote the recommendation giving regulators more control over large facilities, told the commission on Monday that he didn't intend for that authority to be limited to areas near communities.

"That tool is only useful if it can be used everywhere," Buescher said.

Brent Boydston, vice president of the Colorado Farm Bureau, said the proposals should recognize the role of property owners in discussions about the locations of wells and tanks. Frequently, the person who owns the land — called the surface owner — doesn't own the minerals underneath, requiring negotiations on access to the property.

"There is absolutely no assurance that the surface owner will actually have a say in what happens on their property" under the proposed rules, Boydston said.

Energy company representatives have said the rules go beyond what the task force recommended.

Doug Flanders of the Colorado Oil and Gas Association said drilling near urban areas is likely to become more common. Flanders said 30 percent of the rich Denver-Julesburg Basin is within municipalities.

The hearings continue Tuesday. It's not clear when the oil and gas commission will vote on the proposals.