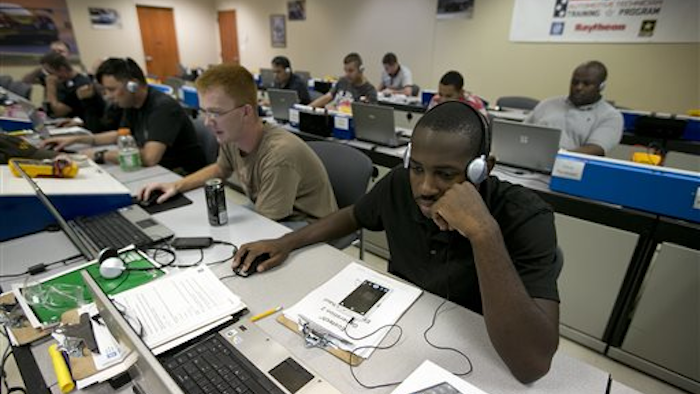 Applications are a proxy for layoffs, so the very low levels suggest that businesses are confident enough in the economy to hold onto their workers. The data also show that employers refrained from layoffs even as the economy contracted in the first three months of the year, a sign they saw the slowdown as temporary.

Nearly 2.25 million people received benefits, up 22,000 from the previous week. Still, the total number of beneficiaries has fallen 13 percent in the past year.

Only about a quarter of the unemployed receive unemployment aid. Some have exhausted all the aid available, which is capped at 26 weeks in most states. Others don't qualify for benefits, such as college graduates looking for work.

The economy shrank 0.2 percent in the first quarter, but analysts expect growth will return and reach about 2.5 percent at an annual pace in the current April-June quarter. Steady hiring in the past year and gas prices that are still cheaper than a year ago have encouraged Americans to spend more, fueling growth.

Consumers ramped up their spending 0.9 percent in May, the biggest gain in nearly six years, according to a separate report Thursday from the Commerce Department.

In addition to a low level of layoffs, employers are also hiring at a robust pace. They added 280,000 jobs in May, above last month's monthly average of 264,000, which was the most in 15 years.

The unemployment rate rose to 5.5 percent from 5.4 percent, but even that contained some good news: more Americans, encouraged by their prospects, started looking for work last month. Not all immediately found jobs, lifting the unemployment rate.

Other data also suggests that the economy is picking up after faltering at the start of the year. Consumers ramped up their car purchases in May to the fastest sales pace since July 2005.

And the housing market is hot again: Sales of existing homes are on track for their best year since 2007. New home sales last month reached their highest level since February 2008.