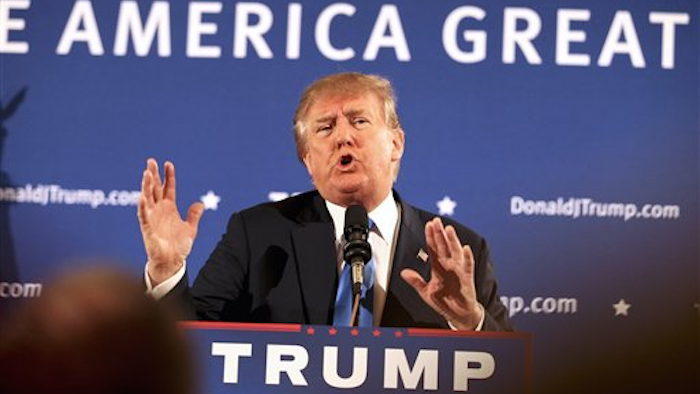 WASHINGTON (AP) — Donald Trump has his facts wrong when it comes to claims the Republican presidential candidate pressured the company into scrapping plans to build a plant in Mexico, the chief executive of Ford Motor Co. said Tuesday.

During a conference call to discuss the automaker's third-quarter earnings, Mark Fields said Ford has not talked to the billionaire businessman or made any recent changes to its manufacturing plans.

"Facts are stubborn things, and at Ford we're proud of the facts," Fields said. "Unfortunately, we suspect the facts are getting lost in the politics."

"Word is that Ford Motor, because of my constant badgering at packed events, is going to cancel their deal to go to Mexico and stay in U.S." he wrote.

Trump often says that to discourage U.S. automakers from moving their production efforts, he plans to slap a 35 percent tax on vehicles and auto parts made in Mexico if elected president.

But Fields said that Ford's decision to move heavy truck production from Mexico to Ohio, which Trump was apparently referencing in his tweet, was made in 2011. Production began in Ohio in August.

Trump's tweet appears to have been sparked by a posting on a political blog, which cited an August NBC News article about the manufacturing shift.

Trump's error was quickly seized on by Ohio Gov. John Kasich, one of his presidential rivals, who said that he, in fact, deserves credit for Ford's decision.

"He clearly made a mistake. He was wrong. He tried to say that his bombast was what got Ford here," Kasich said at a news conference on Monday, adding that his administration had worked closely with Ford and GM and Honda and Chrysler during his tenure.

"Bombast doesn't win jobs, and those who use bombast as a way to get things done rarely carry the day," he added.

Trump spokeswoman Hope Hicks did not directly respond to the error, but said in a statement that Trump "continues to emphasize the importance of bringing jobs back to the United States and encouraging corporations to build factories in our country in order to create thousands of jobs for Americans."

She said that Trump, "was merely using the story of the Ford factory now located in Ohio to reinforce the importance of this issue he discusses often."

As to Ford's statement that they have not made changes to plans to expand south of the border, she added, "Trump says, 'My response is, they should.'"