The Commerce Department said Wednesday orders for durable goods increased 2 percent in July after a 4.1 percent gain in June. 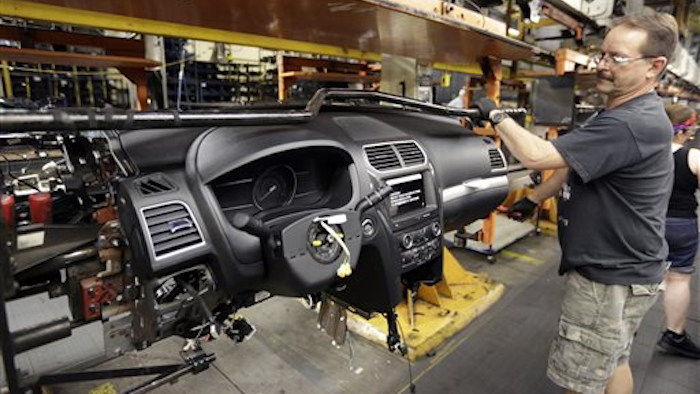 WASHINGTON (AP) — Orders to U.S. factories for long-lasting manufactured goods rose in July, and demand in a key category that tracks business investment plans jumped by the largest amount in 13 months.

The Commerce Department said Wednesday orders for durable goods increased 2 percent in July after a 4.1 percent gain in June.

Orders in a category that serves as a proxy for business investment expanded 2.2 percent in July following a 1.4 percent rise in June. These orders had fallen in four of the previous five months, reflecting the soft patch that manufacturing has faced this year.

Ian Shepherdson, chief economist at Pantheon Macroeconomics, called the 2.2 percent gain in the business investment category "really good news." He said the strong gain was a solid indication that the big cutbacks in investment spending by oil companies were starting to taper off.

While the July increase is encouraging, U.S. manufacturers still face a host of problems from a stronger dollar to falling oil prices and turbulence in China, the world's second biggest economy.

The higher value of the dollar against foreign currencies makes U.S. goods more expensive and less competitive in major export markets. The lower oil prices have led energy companies to scale back their investment plans.

The overall economy, as measured by the gross domestic product, grew at an annual rate of 0.6 percent in the January-March quarter before reviving to a growth rate of 2.3 percent in the April-June period.

Many economists believe the second quarter figure will be revised higher to above 3 percent when the government issues its second look at GDP in the spring on Thursday.

The July increase in orders for durable goods — items expected to last at least three years — was bigger than economists had been forecasting. They rose even though demand for commercial aircraft fell 6 percent during the month following a 69.7 percent surge in June.

Orders for machinery rose by 1.5 percent, and demand for communications equipment increased 1.8 percent. But orders for computers and primary metals such as steel both fell.