The makeup of crude oil from the Bakken formation has been at the forefront because of several fiery train derailments, including one in December 2013 outside Casselton that created a huge fireball and several explosions. 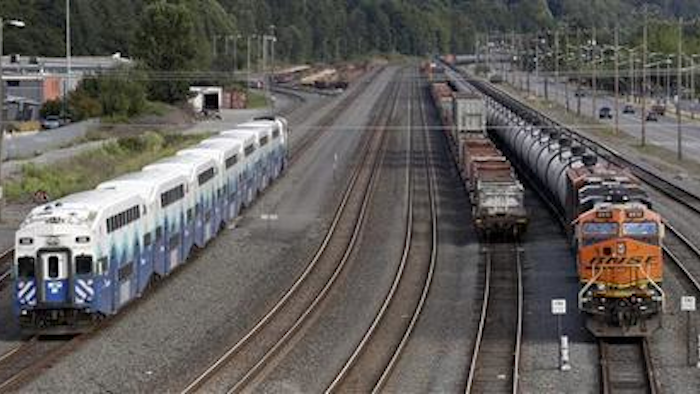 Preliminary research and comments by several federal agencies on the volatility of crude oil from North Dakota shows that Bakken crude has been unfairly singled out in safety discussions, oil industry representatives said Tuesday.

The makeup of crude oil from the Bakken formation has been at the forefront because of several fiery train derailments, including one in December 2013 outside Casselton that created a huge fireball and several explosions. Some regulators have said that Bakken crude is more flammable than other crude oils.

Treseder said findings by the Department of Transportation, Department of Energy and Federal Railroad Administration seem to point to the same conclusion. She said DOT officials told federal lawmakers that the vapor pressure of Bakken crude was "not outside the norm" for light crude oils.

"This wasn't a surprise for anyone in the oil and gas industry, but having it said on the record in front of Congress was a step in the right direction, I think, for informing many other parities," she told oil company officials.

"We're trying to make sure that any regulations or requirements imposed are based on sound science and facts," Treseder added. "API has been pushing very hard for this work to get done on a timely and complete basis so it takes into account real world conditions."

North Dakota Petroleum Council president Ron Ness said the group has stated "from day one" that Bakken crude is not unique.

"Just like you saw in the ethanol fire down in South Dakota this week, there are many things that are flammable that go by communities and cities across this country every day," Ness told The Associated Press as the council's meeting was taking place.

Even so, the state of North Dakota passed new rules to reduce the oil's volatility before it's loaded onto train cars. Ness said state officials felt an obligation to "do everything possible" to prevent a catastrophe.

"We weren't necessarily thrilled with the rules because we felt we were being singled out from every other crude oil in America," Ness said. "But the reality is there's more Bakken crude on the rails than anything else. We've got the rules in place, we've learned to live with them, we've made the investment and it's happening."

He said a better idea is to get more pipelines in place. North Dakota Pipeline Authority Director Justin Kringstad told oil company officials at the meeting that rail shipments are down to 47 percent of the oil moved out of state, compared to a high of 75 percent two years ago.

Kringstad said it will be until late 2016 or into 2017 before further pipeline projects are completed, so the amount of oil shipped by rail is not likely to change. He added that there's no way to get oil to the West Coast other than by rail.