The principal owner of the warehouses at the center of deadly blasts in Tianjin also is on the board of a state-owned company that is controlled by the same powerful entity investigating the explosions. 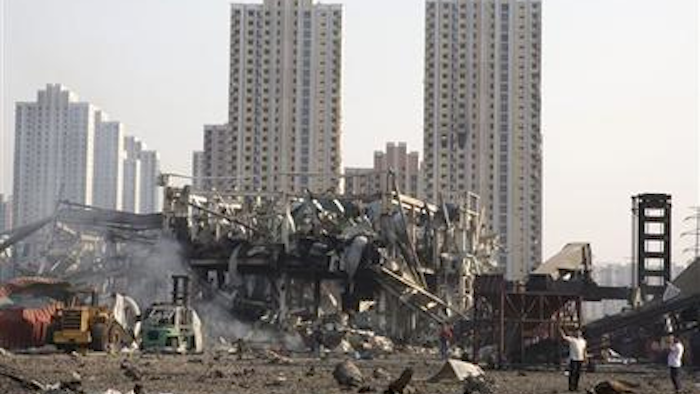 The man unveiled as principal owner of the warehouses at the center of deadly blasts inTianjin also is on the board of a state-owned company that is ultimately controlled by the same powerful entity investigating the explosions, an Associated Press review of public documents found.

Corporate filings show that Yu Xuewei, the silent majority shareholder of Ruihai International Logistics, sits on the board of directors of a subsidiary of China Sinochem, one of the country's most influential conglomerates. Like other large state companies, Sinochem is controlled by the State Council, the central authority overseeing the investigation into last week's explosions at Ruihai's chemical warehouses that killed at least 114 people and displaced thousands.

Yu's connections hint at the extent of his political network and showcase the complexity of China's political system, in which the entity running an investigation can be linked to the company it is investigating. Major state-owned Chinese companies often are accused of ignoring safety and other regulations, especially Cabinet-level enterprises whose chief executives have a higher status in the ruling Communist Party hierarchy than the regulators who are supposed to oversee them.

China Sinochem has tried to distance itself from Ruihai. Two days after the explosions it published a statement acknowledging that former staff members worked at Ruihai, but disavowing any deeper links. Sinochem wrote that Ruihai "has no relationship with Sinochem or its affiliated companies" and that former employees had "all long terminated employment" with Sinochem and its affiliates.

Current corporate records, however, show that Yu was a director Tianjin Port Sinochem even after he founded Ruihai. Those records, filed with the Administration for Industry and Commerce in Tianjin, were last updated in February and no subsequent changes to the board have been recorded. The majority owner of Sinochem Logistics is Sinochem Tianjin Co., a subsidiary of China Sinochem, AIC records show.

Attempts to reach Sinochem for comment Thursday were unsuccessful. No one at Tianjin Port Sinochem answered the phone. Sinochem Tianjin Binhai Logistic Corp. referred questions to the Sinochem Group. Calls, emails and a text message to Sinochem's spokesman were not returned.

Yu admitted to using his political influence to get around safety norms in an interview published Wednesday by the state-run Xinhua News Agency, which was granted exclusive access to him in detention. He said he masked his affiliation with Ruihai by registering his 55 percent stake in the name of his wife's cousin.

The now-destroyed Ruihai warehouses violated Chinese law because they were less than 600 meters (2,000 feet) from a large housing complex, highway and light rail station — and for other reasons. Ruihai was licensed to warehouse hazardous chemicals only through Oct. 16, 2014, according to Administration for Industry and Commerce records. Ruihai obtained a port license in June 2015 that again allowed them to work with dangerous chemicals, but in the interim handled hazmat without a license, according to Xinhua. Ruihai also failed to file annual reports in 2013 and 2014, according to its filings.

Yu owns Ruihai with Dong Shexuan, whose father used to be chief of police at Tianjin Port and put his shares in the name of a schoolmate, according to Xinhua. Both men have been detained by police.

Despite such stark revelations in China's official media, the full web of interlocking interests and ownership behind Ruihai remains murky. The scope of published investigations has been largely restricted to Ruihai's local power network. Reports in Chinese media exploring Ruihai's connection with Sinochem have been censored.

Sinochem, founded one year after the People's Republic of China itself was born, has interests in energy, agriculture, chemicals, real estate and financial services. Sinochem said in its latest annual report that it has 50,000 employees and more than 300 subsidiaries.

The State Council, China's cabinet, has set up a panel to investigate the accident, which has sparked public outrage at regulatory and safety lapses and gross chemical contamination in one of China's largest cities. Chinese Premier Li Keqiang said the investigative team would "severely" punish those responsible, according to Xinhua, the mouthpiece of China's ruling Communist Party.

"If our homes are gone how can we have the faith to support and love the party or the country?" said Niu Guijun, who bought a home near the blast site in 2013.

Ruihai's links to the State Council illustrate the overlapping corporate, political and regulatory interests that are the norm in China's one-party system.

"Who tries to monitor how the industry works — regulators — government officers who develop safety policy, and also the commercial business owners, all these interests are mixed," said Fu King-wa, an associate professor at the University of Hong Kong's Journalism and Media Studies Center. "I think a lot of people find this a problem, but there's no channel to try and execute reform in a political manner."

Yu and the reported frontman for his shares in Ruihai, Li Liang, played roles in at least four other companies, according to Chinese and Hong Kong corporate filings.

Though Yu Xuewei's name does not appear in Ruihai's corporate filings in China, Hong Kong records show that he set up a company called Hong Kong Ruihai International Logistics Co. Ltd. in January 2013, less than two months after Ruihai Logistics was registered in Tianjin. Many mainland companies also register in Hong Kong to facilitate trade financing.

AIC records also name Yu as a board member of Tianjin Henglu Biopharmaceutical Technology Co. Ltd., which was set up in January 2014 to do development and consulting work and sell chemicals, though not hazardous ones.