Orders to U.S. factories for long-lasting manufactured goods fell in May, pulled down by a sharp drop in demand for aircraft. But a category that reflects business investment rose last month, a hopeful sign for manufacturing. 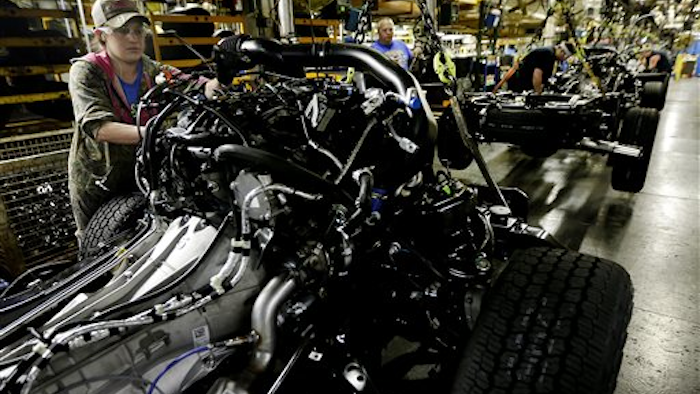 Orders to U.S. factories for long-lasting manufactured goods fell in May, pulled down by a sharp drop in demand for aircraft. But a category that reflects business investment rose last month, a hopeful sign for manufacturing.

The Commerce Department said Tuesday that total orders for durable goods dropped 1.8 percent in May after falling 1.5 percent in April. Last month's drop was caused in part by a 35.3 percent plunge in orders for aircraft, which is often a volatile category.

American factories have struggled this year in part because a strong dollar has made U.S. goods more expensive overseas. Cheaper oil prices also mean energy firms are buying less equipment. So far this year, durable goods orders are down 2.2 percent from January-May 2014.

A key category that tracks business investment plans — orders for non-military capital goods excluding aircraft — rose 0.4 percent in May, reversing a 0.3 percent drop in April. Some economists view the increase as a sign that the damage from lower oil prices is starting to fade.

"The underlying trend in U.S. core orders and shipments point to stronger activity ahead," Jennifer Lee, senior economist at BMO Capital Markets, wrote in a research note. "It helps that the greenback, though strengthening again recently, is off its highs, and oil prices are steadying."

But Paul Ashworth, chief U.S. economist at Capital Economics, noted that factories reduced inventories in May, a sign that manufacturers expect less demand from customers. Reduced inventories are a drag on economic growth.

The Federal Reserve Bank of New York also reported that factory activity in New York state contracted in June. But factories around Philadelphia expanded this month at the fastest pace since December, the Philadelphia Fed reported last week.

Despite their troubles, factories keep hiring, though at modest levels. The Labor Department reported that manufacturers have added jobs 22 straight months through May, longest streak since the late 1970s.