Nissan Motor Co.'s Mississippi plant is on track to receive more state aid and tax breaks than what state and company officials have previously revealed, according to a study paid for by the United Auto Workers, which is questioning whether the state is getting enough for its money. 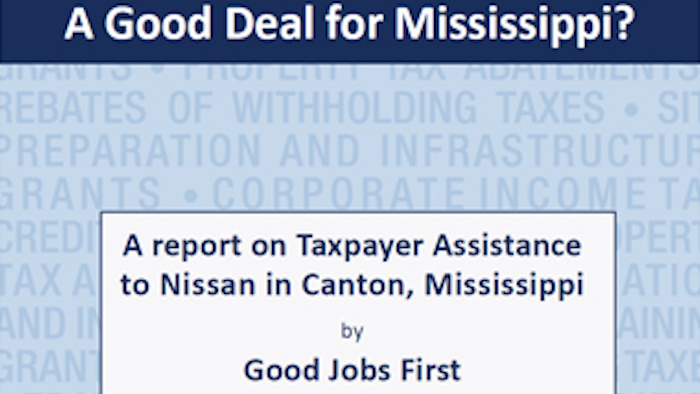 JACKSON, Miss. (AP) — Nissan Motor Co.'s Mississippi plant is on track to receive more state aid and tax breaks than what state and company officials have previously revealed, according to a study paid for by the United Auto Workers, which is questioning whether the state is getting enough for its money.

The study finds the state and Madison County governments may provide Nissan's Canton plant with nearly $850 million in tax breaks over 30 years, plus $400 million in cash aid. It also estimates Mississippi will pay $90 million in interest on money borrowed to aid Nissan, bringing total subsidies to as much as $1.33 billion.

The study was conducted by Good Jobs First, a nonprofit group based in Washington, D.C., that tracks how taxpayer money is used to subsidize private business.

The study was released Friday at a news conference led by Mississippi Alliance for Fairness at Nissan, a group of ministers and politicians who are lobbying Nissan to allow union recruiting at the plant without company opposition. They say after taxpayers have given the company so much money, Nissan should do more for its workers.

"The investment was made with the expectation that Nissan would recognize the basic human rights and civil rights and dignities of its workers," said the Rev. Melvin Chapman, pastor of Sandhill Missionary Baptist Church in Edwards. He and other alliance members say Nissan is pressuring its workers to reject a union.

Nissan spokesman Justin Saia said workers make good wages and Nissan has lived up to its agreements with the state and county.

"Nissan has more than met the requirements for job creation called for in the state's incentive package," Saia said in a statement. "Nissan is proud of its history of beneficial economic impact in Mississippi and its reputation as a good corporate citizen."

Kathy Gelston, chief financial officer of the Mississippi Development Authority, said the report overestimates tax subsidies, and that if Mississippi hadn't aided Nissan, there would be no taxes to collect.

"The estimated total incentive figures in this report are based on the false assumption that tax revenue would have been collected even if Mississippi had not invested in Nissan," Gelston wrote in an email.

"It's important to note that the state receives zero tax dollars from companies that don't invest in a Mississippi location."

About 5,200 employees work at the sprawling Canton complex, including full-time employees who make more than $50,000 a year. But not all work directly for the company; the report criticizes Nissan for using contract and temporary workers, who make less than half as much.

"Taxpayers are handing out premium amounts for jobs that are far from premium," said Philip Mattera, research director for Good Jobs First.

Contract workers are a major issue in the union push. The UAW has been courting support in Canton for years, but has never petitioned for an election there. Nissan won't say what share of employees are contract workers.

State officials have told reporters that Mississippi has given $378 million worth of incentives to Nissan. That includes money spent to buy land, build roads, water and sewers, and to train workers. It also includes $25 million spent to construct Mississippi State University's Center for Advanced Vehicle Studies.

But the deal also included tax incentives that could be worth more. Good Jobs First contends that lawmakers didn't understand how much Nissan would benefit when they voted for the initial subsidies and a follow-up deal.

"The problem was the legislators, media and public were not told the whole story," Mattera said.

The group estimates that corporate income tax credits worth $5,000 per worker, per year, could net $400 million for Nissan over 25 years. Mississippi's law lets Nissan carry the credits forward for five extra years, giving it 25 years to use them.

But it's not clear if Nissan will earn enough profit to use all the credits. At Mississippi's top corporate income tax rate of 5 percent, Nissan would have to earn $8 billion in taxable profits in Canton to use them all. The worldwide company earned a $3.3 billion profit last year.

Mattera said the study is meant as an estimate of maximum incentive amounts.

Good Jobs First is also critical of a Mississippi program that lets Nissan and some other companies collect worker income tax payments that would otherwise go to the state. That program could help Nissan net $160 million over 25 years. Good Jobs First says that's the largest such deal awarded in the United States.

The study estimates that as a result, Madison County will forgo $210 million in tax revenues over 30 years.

"As these assets become fully taxable, the county and schools will benefit financially from the additional taxes that are paid by Nissan," Gelston said. She also said some spending, such as the vehicle center and infrastructure spending, benefits others in addition Nissan.

"Nissan has been a great partner to the state and has met all commitments they have made," she said.