Businesses Get Pushed Out As Industrial Districts Rebuild 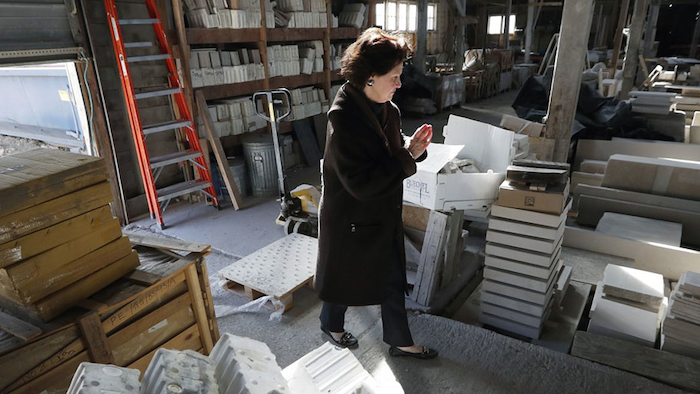 DES MOINES, Iowa — Leaning over the map, Brian Vincent turned to a city official and asked, "Why does it show a park instead of my business?"

The planner paused and then explained. Des Moines leaders had concluded that the park was a better use of the land than the low-slung building that had housed Corn Belt Aluminum for decades.

Vincent was shocked by the exchange, but businesses across the country are landing in similar positions as cities remake gritty, industrial districts into trendy hotspots with glassy apartment buildings, coffee shops and microbreweries. The transformations are a point of pride for growing communities but difficult for manufacturers and warehouse owners, who, after operating successfully for decades, sometimes now feel shunned by their new, more polished neighbors.

The cold shoulder feels especially chilly in the Midwest, a region that has long prided itself on an unassuming work ethic and a long, prosperous history of steel mills, factories and meat-packing plants.

In a part of Minneapolis-St. Paul known as the Midway, manufacturers have drawn complaints about noise and truck traffic from residents of new apartments built along a light rail line that links the two cities.

Many warehouses and light industrial businesses have disappeared from Denver's River North Art District. With real estate becoming so expensive, the few that remain will likely sell out.

And in the Milwaukee neighborhood called Walker's Point, the trend has progressed to the degree that some people are now trying to retain some industry and older housing because, as University of Wisconsin-Milwaukee urban planning professor Carolyn Esswein puts it, "If it's suddenly all 12-story housing towers, that doesn't have the same feeling."

Des Moines businesses are focused on the makeover of an area dubbed the Market District, which stands nearly in the shadow of the golden state Capitol dome and borders a trendy area of shops, hotels and bars called the East Village. Planners envision replacing manufacturing buildings, warehouses and scrap yards with housing, offices and shops. It's a dream that's quickly becoming reality as sleek apartment towers, craft beer bars and even a design-your-own cupcake bakery open in the neighborhood.

Apart from state government and insurance firms, Des Moines has long relied on a blue-collar workforce that produced soap, steel and other goods in drab buildings in and around the city's compact downtown. Most of those buildings have been renovated or demolished, making room for a sculpture garden, loft apartments and townhouses. The businesses moved elsewhere.

The Market District will be one of the last industrial strongholds, and while Vincent said he likes the improvements, he's puzzled why the city does not seem to value the well-paying jobs he provides for about 15 workers.

"It's great they're doing this, but then they go to the businesses and say, 'Hey, you need to get out,'" he said.

A few blocks away, the encroaching development convinced Teresa Van Vleet-Danos to sell a 2-acre property and move her stone-cutting business, which was started by a Scottish immigrant who came to Des Moines to help build the Capitol and stayed. Rowat Cut Stone & Marble has been at the same location for 138 years.

"I love this old building," said Van Vleet-Danos, pointing out details of the cavernous wooden structure she's owned for 32 years. "It has its own character, its own vibe."

The company has until this summer to clear out. The weathered building will be knocked down and replaced with apartment towers. 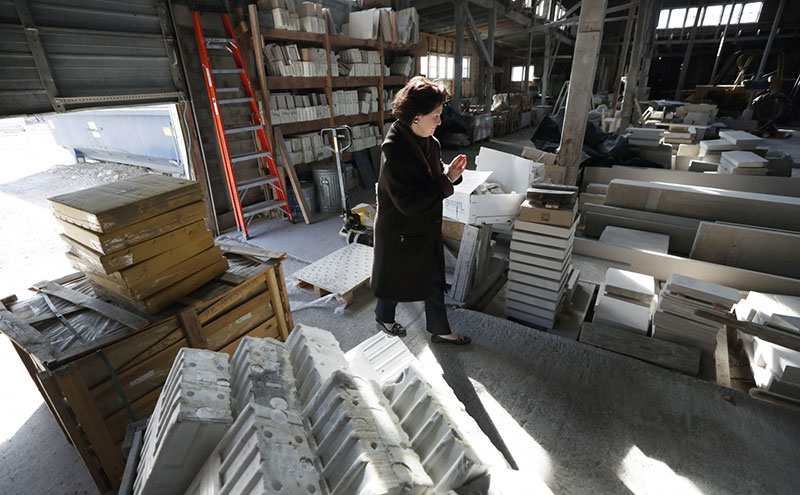 In this Feb. 14, 2017, photo, Teresa Van Vleet-Danos walks through the production area in the Rowat Cut Stone & Marble plant in Des Moines, Iowa. Manufacturing businesses across the country are getting pushed out of neighborhoods where they have operated for decades as cities remake gritty industrial districts into trendy hotspots. Due to encroaching development, Rowat Cut Stone & Marble has until this summer to clear out, leaving behind a weathered building that will be knocked down and replaced with apartment towers. (Charlie Neibergall/Associated Press)

Because of her success at Rowat, a local business journal in 2012 named Van Vleet-Danos its woman business owner of the year. But with the area around her company changing so dramatically, she knew her occasionally loud, sometimes dusty operation would not last at the site. So when she was offered a good price for her property, she agreed to relocate, probably to a Des Moines suburb.

"It won't be the same because you can't recreate this," Van Vleet-Danos said.

Erin Olson-Douglas, the city's economic development coordinator, said the map shown to Vincent was only one possible plan and that the city may never replace his building with a park. But she acknowledged that such ideas can be surprising for business owners as cities try to shape the future of key neighborhoods.

As painful as the upheaval can be, the increased interest among housing developers and others caused property values to soar. So in the best-case scenario, businesses can make enough money by selling out to pay for the move to a new location, Olson-Douglas said.

Susan Wachter, a professor of real estate and finance at the University of Pennsylvania's Wharton School, said over the next 10 to 20 years, development will drive the last warehouses and light manufacturing centers out of city cores.

"This transformation is taking place right now," she said.

Apart from preserving specialty industries, such as Philadelphia's diamond district, where hundreds of retailers and craftsmen make and sell jewelry, Wachter said there is no stopping the trend.

When development chased manufacturers from Denver's River North district, artists moved in to the fill the void. But like the industrial businesses before them, many are now getting pushed out by high property values and development.

"It's disruptive to your psyche," said Chandler Romeo, who owns property in the area. "It's really strange. Our landscape is changing so fast."