NCA Survey: Retail Sales of Halloween Candy in 2015 Projected to be $2.6B

NCA projects that retail sales of Halloween candy in 2015 will be $2.6 billion, a boost to the U.S. economy that helps support 55,000 manufacturing jobs and hundreds of thousands of jobs in related industries. 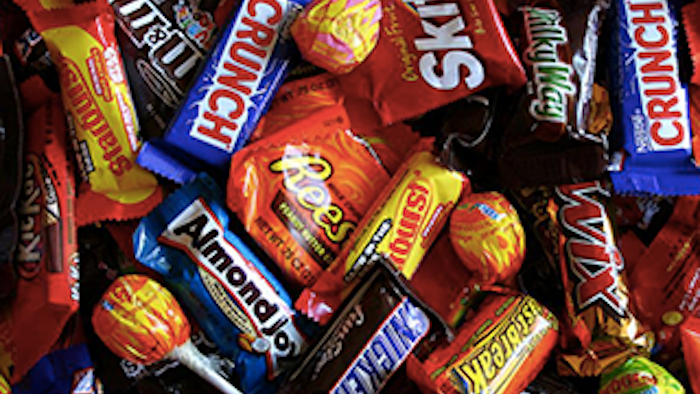 Washington (Oct. 6, 2015) — The trick to enjoying your favorite Halloween treats? Moderation, according to the results of the National Confectioners Association’s (NCA) new national survey. As the holiday approaches, nearly 80 percent of parents report that they have a plan in place to help their children make smart decisions when it comes to the enjoyment of treats. More than three-quarters of Americans will hand out candy to trick-or-treaters this year and many others will participate in community-sponsored Halloween events, display a seasonal candy bowl or attend a Halloween party. NCA projects that retail sales of Halloween candy in 2015 will be $2.6 billion, a boost to the U.S. economy that helps support 55,000 manufacturing jobs and hundreds of thousands of jobs in related industries.

“People understand that candy is a treat, and this year’s survey tells us that they are celebrating Halloween in more ways than ever and practicing moderation,” said Alison Bodor, executive vice president of the National Confectioners Association. “Parents, including me, are embracing Halloween celebrations and traditions, but we’re also using the holiday as an opportunity to teach our children how to enjoy candy as a fun part of a balanced lifestyle.”

Bodor added that the U.S. confectionery industry supports 465,000 American jobs. “From our industry’s own manufacturers to the jobs we help support on the farms where our ingredients are grown and in the stores where our products are sold, candy makers are supporting good-paying jobs in this country. Confectioners are vital to the economic success of their communities – at Halloween and year round.”

According to NCA’s seasonal survey, more than 90 percent of parents discuss or plan to discuss balance and moderation with their children relative to their candy consumption, and while most report having these conversations year-round, many use the holiday as a starting point.

Those who stay home to hand out candy also recognize the importance of balance and moderation. More than 60 percent of respondents prefer to hand candy to trick-or-treaters, rather than having the ghosts and goblins help themselves, and nearly 60 percent of those surveyed believe that up to two pieces is just the right amount per household.

Halloween Is Meant For Sharing
Halloween continues to be the top candy-giving holiday with 86 percent of people gifting or sharing chocolate or other candy. Seven in 10 people believe that holidays like Halloween are meant for enjoying candy, and that it is important to do so in moderation. Parents support the notion that sharing is a critical piece of the Halloween celebration – a full 80 percent report that they enjoy some of their children’s Halloween bounty by either sneaking it when the kids aren’t looking (23 percent) or by instituting a house rule that it must be shared (57 percent).

Candy Is Always A Treat
NCA’s survey revealed that 81 percent of Americans support the notion that candy is a treat and 75 percent agree that it is okay to enjoy seasonal chocolate or candy. Almost 20 percent of consumers say they are more likely to buy seasonal candy in smaller portion sizes than they were five years ago.

Everyone Has A Favorite
Americans love chocolate year-round, and Halloween is no exception. A full 70 percent of people say chocolate is their favorite Halloween treat, followed by candy corn (13 percent), chewy candy (6 percent) and gummy candy (5 percent). Despite chocolate’s popularity, most Americans (63 percent) say they stock their trick-or-treat candy bowls with a mix of chocolate and non-chocolate, so that they can be sure to have something everyone will like. When it comes to selecting candies in shapes like spiders, eyeballs and brains to inspire seasonal celebrations, parents are 24 percent more likely than non-parents to pick creepy candy over other Halloween themes.

Keeping An Eye On The Candy Stash
Nearly four in five parents (79 percent) encourage moderation by keeping tabs on their children’s candy consumption following Halloween, but they take different approaches. Some limit their children to a certain number of pieces per day (35 percent), a total number of pieces overall (14 percent), or a general amount of calories (9 percent) and then take the rest away. Twenty-one percent opt to take responsibility for the candy and dole it out as appropriate. NCA supported research at Pennsylvania State University to help parents learn practices that promote balance and moderation with treats in their homes. As part of that research, a scientific literature review published recently in the Journal of Pediatric Obesity concluded that simply restricting or forbidding children from having snack foods or other treats, like candy, is not an effective approach to helping them learn how to consume these foods in moderation.

Survey Methodology
NCA’s 2015/2016 Seasonal Survey was conducted by 210 Analytics, LLC using a database comprised of several million respondents who have agreed to participate in survey research. Interviews took place using a self-administered, online questionnaire. To maintain the reliability and integrity in the sample, each invitation contained a password that is uniquely assigned to that email address and must be entered at the beginning of the survey. Web-assisted interviewing software is used to control quotas in order to mirror the census profile in terms of key demographics such as age, income, region and other factors. The survey was completed by 1,630 individuals in August 2015. The margin of error is +/-2.43%.

The National Confectioners Association is the trade organization representing the $35 billion U.S. confections industry. NCA and its members value the fun and enjoyment of chocolate, candy, gum and mints, serving as a transparent and trustworthy source while building and promoting a responsible industry. As the leading trade association for the industry, NCA is proud of the role it plays in the public’s understanding and appreciation of candy’s unique role in a happy, balanced lifestyle. For more information, visit www.CandyUSA.com.