Starbucks Corp. delivered another quarter of sales gains as more customers visited its stores worldwide. But the coffee giant's shares slipped in extended trading Thursday after it issued a modest profit forecast for the current quarter. 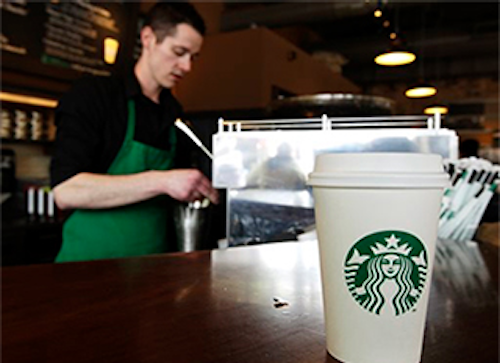 Starbucks Corp. delivered another quarter of sales gains as more customers visited its stores worldwide. But the coffee giant's shares slipped in extended trading Thursday after it issued a modest profit forecast for the current quarter.

The gains were made on improved traffic and spending in its stores as more people indulged on food and higher-priced drinks.

Starbucks said that revenue in its stores open at least a year — considered a key indicator of financial performance — jumped 8 percent in the fourth quarter.

CEO Howard Schultz said the sales gains "demonstrate the strength and relevance of the Starbucks brand around the world."

The profit gains came despite increased spending on the company's digital efforts, such as its mobile order and pay service, and added spending on staff, including wage increases and education reimbursement.

Starbucks shares have increased 52 percent since the beginning of the year, far outpacing the Standard & Poor's 500 index, which has risen slightly more than 1 percent. In late trading, the stock declined 61 cents to $61.89.