Hershey is looking to expand in China by tapping into the country's taste for "milk candy," a product that accounts for a quarter of the total candy market in the country. Hershey's new Lancaster brand will debut in three Chinese cities next month.

NEW YORK (AP) — Hershey is looking to expand in China by tapping into the country's taste for "milk candy."

The Pennsylvania company says it's launching a new line called Lancaster in three cities next month, followed by wider distribution next year. Hershey notes that milk candy accounts for a quarter of the total candy market in China.

The new product marks Hershey's latest push to expand its presence in China, where the potential for sales growth is far greater than in developed countries such as the U.S. But the company has plenty of catching up to do with just 2.2 percent of the country's chocolate market, according to the market researcher Euromonitor International.

Mars Inc., the privately held company that makes Snickers, M&M's and Twix, is No. 1, followed by Nestle, which makes Baby Ruth and 100 Grand.

The Hershey Co., which makes its namesake Kisses, Reese's peanut butter cups and Twizzlers, says Lancaster is the first time it's launching an entirely new brand outside the U.S. The company says it will be made with imported milk and a "slow cooking" process.

A representative for the company was not immediately available to provide more details. 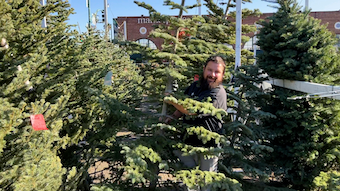