U.S. manufacturing grew in November at the fastest pace in 2½ years as factories ramped up production, stepped up hiring and received orders at a healthy clip. The Institute for Supply Management said Monday that its index of manufacturing activity rose to 57.3. 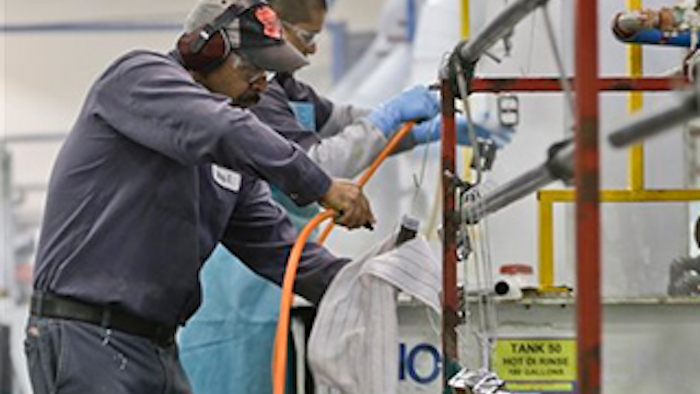 WASHINGTON (AP) — U.S. manufacturing grew in November at the fastest pace in 2½ years as factories ramped up production, stepped up hiring and received orders at a healthy clip.

The Institute for Supply Management said Monday that its index of manufacturing activity rose to 57.3. That was up from 56.4 in October and was the highest since April 2011. A reading above 50 signals growth.

The ISM is a trade group of purchasing managers.

Manufacturing activity has now expanded for six straight months after hitting a rough patch in the spring. The steady gains suggest that growth is remaining solid in the current October-December quarter.

And U.S. builders increased construction spending in October at the fastest pace in more than four years, a separate report on Monday showed. Government spending on public projects drove the increase. By contrast, spending on home construction fell.

Still, the encouraging figures in the ISM's report conflict with weaker recent data on factory activity, making it difficult to discern a clear trend.

"We continue to believe that this indicator is overstating the health of the broader economy," said Joshua Shapiro, chief U.S. economist at MFR Inc.

For example, businesses cut back on orders for long-lasting factory goods in October, according to a government report Wednesday. Orders for durable goods, which are meant to last three years, fell 2 percent.

A fall in aircraft demand drove the decline. But companies also spent less on machinery, computers and metal parts. The weak showing suggests that businesses might have been reluctant to order more goods during the 16-day partial government shutdown in October.

One reason for the divergence could be that the ISM's index doesn't adequately measure smaller manufacturers, according to Ian Shepherdson, an economist at Pantheon Macroeconomics. Larger companies are likely benefiting more from recoveries overseas.

Separate reports Monday showed that manufacturers in China and Europe expanded in November, though more slowly than in the United States. Still, factories in Europe grew at the fastest pace in nearly two years, according to a survey by Markit.

Separately, factory output rose for a third straight month in October, according to the Federal Reserve, driven higher by greater production of primary metals and furniture.

The mixed picture comes as the economy is thought to be slowing in the October-December quarter to an annual rate of 2 percent or less. That would be down from a 2.8 percent annual pace in the July-September quarter.

Much of the third quarter's growth was due to companies rebuilding their stockpiles. The economy is unlikely to benefit from a similar trend in the current quarter.