In his trade war with China, President Donald Trump wields one seeming advantage: The United States could ultimately slap tariffs on more than $500 billion in imported Chinese goods. 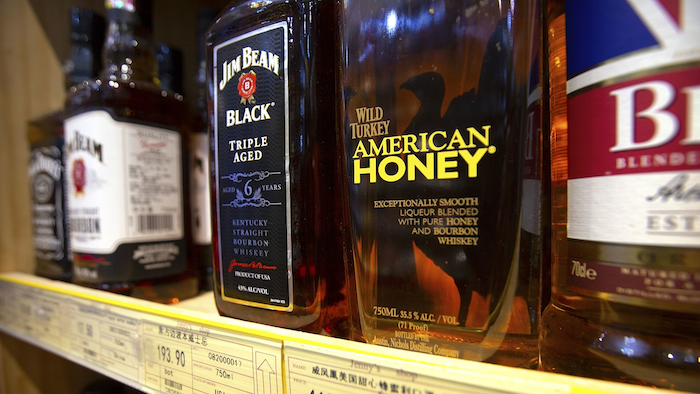 In this Saturday, July 7, 2018, file photo, whiskeys distilled and bottled in the U.S. are displayed for sale in a grocery store in Beijing. Image credit: AP Photo/Mark Schiefelbein, File

In his trade war with China, President Donald Trump wields one seeming advantage: The United States could ultimately slap tariffs on more than $500 billion in imported Chinese goods. Beijing has much less to tax: It imported just $130 billion in U.S. goods last year.

Yet that hardly means China would be powerless to fight back once it ran out of U.S. goods to penalize. It possesses a range of other weapons with which to inflict pain on the U.S. economy.

Indeed, China's Commerce Ministry has warned of "comprehensive measures" it could take against the United States. It has given no details but possible tactics could include harassing automakers, retailers or other American companies that depend on China to drive revenue to selling U.S. government debt or disrupting diplomatic efforts over North Korea.

Some of those steps might harm China's own interests. But Beijing might still be willing to deploy them, at least temporarily, if its trade war with Washington were to drag on.

On Friday, Washington imposed its first tariffs in response to complaints Beijing steals or pressuring companies to hand over technology. China swiftly announced retaliatory tariffs on a similar amount of U.S. goods.

A look at some of China's options:

China's state-dominated and heavily regulated economy gives authorities an arsenal of tools to disrupt U.S. companies by withholding licenses or launching tax, anti-monopoly or other investigations.

Also open to retaliation are services such as engineering and logistics in which the United States runs a trade surplus.

"The U.S. focus is on goods, while China could very well look at services, as well as the operation of U.S. companies in China," said Taimur Baig, chief economist for DBS Group.

In one prominent case, U.S. chipmaker Qualcomm Inc. has waited for months for word on whether Chinese regulators will accept its proposed $44 billion acquisition of NXP Semiconductors. All other major governments have approved the deal.

China's entirely state-controlled media have encouraged consumer boycotts against Japanese, South Korean and other products during previous disputes with those governments.

Last year, Beijing destroyed Korean retailer Lotte's business in China after the company sold land in South Korea to the Seoul government for an anti-missile system opposed by Chinese leaders.

Beijing closed most of Lotte's 99 supermarkets and other outlets in China. Seoul and Beijing later mended relations, but Lotte gave up and sold its China operations.

Nationalists point to China's $1.2 trillion holdings of U.S. government debt as leverage. Beijing might suffer losses if it sold enough to influence U.S. debt financing costs — but such sales might become necessary.

China's yuan has sagged against the dollar this year, which might require the central bank to intervene in currency markets.

To get the dollars it needs, the People's Bank of China might "become a net seller of U.S. Treasurys," said Carl B. Weinberg of High-Frequency Economics in a report.

"Punishing the U.S. Treasury market is one of the tactics China has available to retaliate against unilateral U.S. tariffs," said Weinberg.

Beijing can appeal for support to U.S. allies that are miffed by Trump's "America first" approach and the U.S. withdrawal from the Paris climate pact.

Trump's unilateral actions have allowed China to position itself as a defender of free trade despite its status as the most-closed major economy. That could help Beijing win over governments that have criticized Trump for acting outside the World Trade Organization.

"China could strike a common ground with the EU, Canada, Japan and other economies impacted by the U.S. tariffs," said Citigroup economists Li-Gang Liu, Xiaowen Jin and Xiangrong Yu in a report.

Chinese leaders have tried, so far without success, to recruit European and other governments as allies.

More broadly, Chinese commentators have suggested Beijing also could disrupt diplomatic work over North Korea's nuclear and missile programs or other initiatives. But political analysts say that would risk setting back work Chinese leaders see as a priority.