Wall Street shrugged off the escalation of a trade dispute between the world's two largest economies Friday after the U.S. imposed tariffs on billions in Chinese goods and China responded in kind. 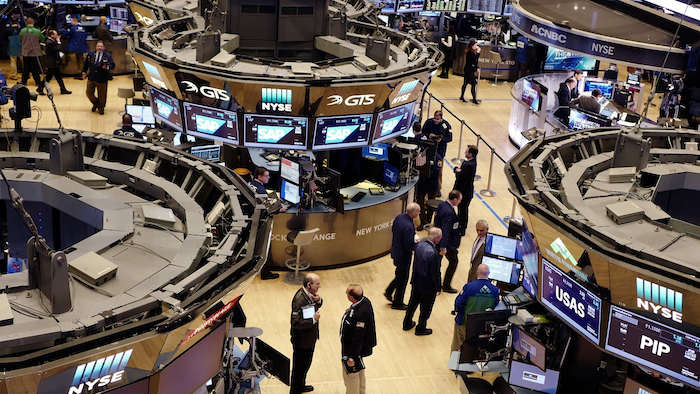 Wall Street shrugged off the escalation of a trade dispute between the world's two largest economies Friday after the U.S. imposed tariffs on billions in Chinese goods and China responded in kind.

After a wobbly start, U.S. stocks were moving broadly higher, placing the market on track for a weekly gain after two weeks of losses.

The market's reaction suggests investors are betting that Washington and Beijing will work out a deal before their trade dispute begins to weigh on corporate profits and the global economy.

"Who would have thought? The first shots of the trade war, and yet the markets are still amazingly resilient," said Erik Davidson, chief investment officer at Wells Fargo Private Bank. "The market is counting on this to subside. If they get an indication that this will continue to escalate, that will cause some problems."

The stock market's benchmark index, the S&P 500, posted two consecutive weekly declines heading into this week as investors worried over rising global trade tensions. That effectively means the market had already priced in, or accounted for, the risks of a stepped-up trade conflict.

The U.S. slapped a 25 percent tax on $34 billion worth of Chinese imports. China retaliated with taxes on an equal amount of U.S. products, including soybeans, pork and electric cars, calling the move the start of the "biggest trade war in economic history."

Though the first exchange of tariffs is unlikely to inflict much economic harm on either nation, the damage could soon escalate. President Donald Trump, who has claimed that winning a trade war would be easy, has said that he's prepared to drastically raise tariffs on more Chinese imports. Mounting tariffs could raise costs across the board for consumers and businesses, slowing growth and investment and hurting companies that rely on imported parts to make their goods.

Investors also welcomed new data Friday from the government showing that U.S. employers kept up a brisk pace of hiring last month, without having to hike wages much. Markets have been watching to see if tight labor market conditions would force wages higher, a sign of inflation.

Health care stocks posted the biggest gains, led by Biogen. The drugmaker's stock soared 17.5 percent to $351.15 on encouraging results from an Alzheimer's therapy.

Shares in PriceSmart slumped 9.5 percent to $84.55 after the warehouse club operator reported earnings that fell short of analysts' forecasts.

Bond prices were little changed. The yield on the 10-year Treasury held at 2.83 percent.