China Eases Investment Curbs as Clash with US Looms

China is ending limits on foreign ownership in auto manufacturing, insurance and other fields but didn't directly address complaints about trade and technology that are fueling conflict with Washington. 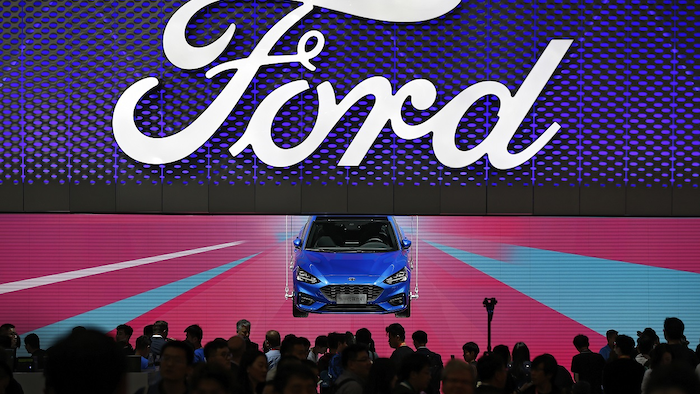 In this file photo taken Wednesday, April 25, 2018, visitors and journalists crowd near a Ford Focus on display at the Ford exhibit during the media day for the China Auto Show in Beijing. Image credit: AP Photo/Andy Wong, File

China is ending limits on foreign ownership in auto manufacturing, insurance and other fields but didn't directly address complaints about trade and technology that are fueling conflict with Washington.

The change, announced late Thursday, had been sought by Washington, Germany and other trading partners. They complain Beijing blocks access to its state-dominated economy while Chinese companies operate freely in their countries.

China's announcement followed President Donald Trump's threat, rescinded on Wednesday, to restrict Chinese investment in the United States. But it confirmed promises made as early as last November, before the latest dispute erupted.

Business groups said Friday it was too early to know the impact until licensing and other rules are released.

Many changes "were previously articulated by China's senior leaders," said Jake Parker, vice president for China operations of the U.S.-China Business Council, an industry group. "But they still represent in theory significant openings."

The announcement included no changes that directly address U.S. complaints Beijing steals or pressures foreign companies to hand over technology.

Trump has threatened to impose tariffs of up to 25 percent on as much as $450 billion of Chinese goods. Beijing says it will retaliate, prompting fears the dispute could chill global trade and economic growth.

The ruling Communist Party has insisted on making changes at its own pace while sticking to a state-led industrial development strategy seen as a path to prosperity and global influence.

A separate government report Thursday defended China's trade record in a possible attempt to deflect pressure for change by emphasizing benefits to other countries from selling to its growing market.

Beijing has gradually eased entry to industries such as finance or electric car manufacturing once Chinese companies establish a strong competitive position or when it wants to spur development.

China is "attempting to show it is indeed opening up," said the chairman of the American Chamber of Commerce in China, William Zarit, in a statement. He said that might "help to defuse trade frictions" with countries that think China "continues to take advantage of their openness."

Still, companies need to see licensing rules to know how freely they can operate, Parker said.

"That process will ultimately determine how significant these openings are," he said.

The latest list "continues to discriminate against non-Chinese companies" by maintaining different rules for them and for local enterprises, the European Union Chamber of Commerce in China said in a statement.

Some companies believe the change is significant but "it is too early to tell what impact it will have," the European chamber's president, Mats Harborn, said in the statement.

Thursday's announcement marks the second time Beijing issued a "negative list" of industries that are off-limits to foreign investment while leaving the rest of the economy open.

That change, first implemented last June, overturned a system that told foreign companies where they could invest. Companies said that failed to keep pace with economic changes and blocked them from emerging market segments.

The latest list reduced the number of restricted economic sectors to 48 from last year's 63.

The biggest surprise appears to be a commitment to end limits on foreign ownership in China's insurance industry by 2021, two years earlier than a deputy finance minister promised in November.

The plan retains a step-by-step increase in ownership limits in finance and some other fields, first to 51 percent and then 100 percent. Business groups have warned that might give Chinese partners leverage to demand higher prices for their stakes.

Ownership caps also are to be eliminated in construction for power grids and railways, passenger train transportation, commercial logistics, surveying and mapping companies, seed breeding, maintenance of ships and aircraft and smelting of rare earth metals.

Some companies believe the change is significant but "it is too early to tell what impact it will have," said the European chamber's president, Mats Harborn, in the statement.