The European Union, Australia, Argentina, Brazil, South Korea, Canada and Mexico will get initial exemptions from looming steel and aluminum tariffs from the Trump administration. 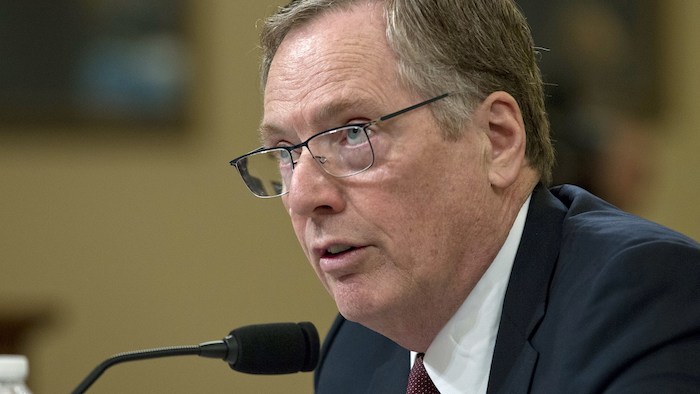 Trump is planning to impose tariffs of 25 percent on imported steel and 10 percent on aluminum — trade penalties aimed at China for flooding the world with cheap steel and aluminum.

U.S. Trade Representative Robert Lighthizer told the Senate Finance Committee that the exempted countries are involved in various stages of trade talks with the U.S., and that Trump decided "to pause" the tariffs for them.

The U.S. is in consultations with Canada and Mexico in an effort to renegotiate the North American Free Trade Agreement.

Trump moved on a separate trade front earlier Thursday, paving the way for tariffs on China as punishment for what he said is the theft of American technology. He told reporters that the threat of the steel and aluminum tariffs was already having an impact.

"Many countries are calling to negotiate better trade deals because they don't want to have to pay the steel and aluminum tariffs," Trump said.

Lighthizer identified the countries initially exempted from the steel and aluminum tariffs in response to a question from Sen. Ron Wyden, D-Ore., who said lawmakers wanted more consultation from the administration on trade.

"There are countries with whom we're negotiating, and then the question becomes the obvious one that you think, as a matter of business, how does this work?" Lighthizer said. "So what he has decided to do is to pause the imposition of the tariffs with respect to those countries."

Before Lighthizer's congressional testimony, Germany's economy minister, Peter Altmaier, said he had found officials in Washington "open to our arguments" during a recent visit with the EU trade commissioner, Cecilia Malmstrom.

Altmaier told Germany's parliament "it is a question of fundamental significance: whether we all stand for open and fair world markets in the future."

Trump campaigned on promises to bring down America's trade deficit, which stood at $566 billion last year, by rewriting trade agreements and cracking down on what he called abusive commercial practices by U.S. trading partners. But Trump was slow to turn rhetoric to action. In January, he imposed tariffs on imported solar panels and washing machines. Then he announced the steel and aluminum tariffs, saying reliance on imported metals jeopardizes U.S. national security.

Lighthizer said the nation's trade deficit indicates that the global rules on trade sometimes make it hard for U.S. companies to export.

The administration "is seeking to build a better, fairer system of global markets that will lead to higher living standards for all Americans," Lighthizer said.

GOP Sen. Orrin Hatch of Utah, the committee chairman, said he was "deeply disappointed in the decision to impose global tariffs to address a problem caused by China."

Meanwhile, Democratic Sen. Sherrod Brown, D-Ohio, said he was troubled to hear that South Korea would be initially exempted from the steel and aluminum tariffs.

"I was not expecting that," Brown said. "Korea has unfairly dumped steel and other products in our country."