Trump Declares America Open For Business Under His Tenure

Overall, the two-day dance between Trump and the globalists amid the Alps went smoothly, if uneasily. 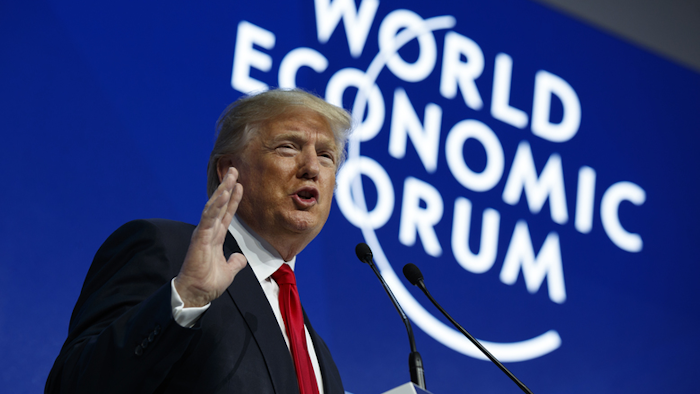 Declaring that America is open for business under his leadership, President Donald Trump told a wary gathering of political and business elites on Friday that the economic growth taking place in the U.S. under to his "America first" agenda also benefits the rest of the world.

Trump told the World Economic Forum in Davos, an incongruous location for a nationalist president, that American prosperity has created countless jobs around the world, but stressed that his priority would always remain on protecting interests within his nation's own borders.

"As president of the United States, I will always put America first just as the leaders of other countries should put their countries first," said Trump.

But the president tried to strike a balance, tempering his nationalist agenda with reassurances to the globalist and cooperation-minded audience that his protectionist vision "does not mean America alone."

"When the United States grows, so does the world," Trump said. "American prosperity has created countless jobs around the globe and the drive for excellence, creativity and innovation in the United States has led to important discoveries that help people everywhere live more prosperous and healthier lives."

When Trump took the stage, he received modest applause but some people kept their hands at their sides. The crowd was largely subdued as the president spoke but there were boos and hisses when Trump took a swipe at "how nasty, how mean, how vicious and how fake the press can be."

Overall, the two-day dance between Trump and the globalists amid the Alps went smoothly, if uneasily. Long driven to be accepted by the elites, a desire that dates back from his days as a real estate developer out to make it in Manhattan's glitz, Trump appeared to revel in the spotlight, hosting a convivial dinner with business executives and mostly friendly meetings with foreign leaders.

And while Trump reined in his bull-in-a-china shop instincts, avoiding any public upbraiding of allies like he did a year ago at NATO, the crowd at Davos cordially received him, offering him polite applause while straining to get photos of the American president with their cell phone cameras.

Once more shadowed by revelations back home about the ongoing Russia probe, Trump showcased the country's roaring economy and made a pitch to the world leaders that "America is open for business and we are competitive once again."

The gathering had viewed Trump with skepticism, given his "America First" message, but the White House has insisted that his protectionist policies and international cooperation can go hand-in-hand.

Trump addressed the crowd of over 1,500 people packed into a high-ceilinged hall in the modern conference center. Anticipation was high from attendees, who have watched the president closely since he arrived, snapping photos when he entered and as he moved from room to room. As Forum chairman Klaus Schwab introduced Trump, he drew some hisses when he said that the president could be subject to "misconceptions and biased interpretations." 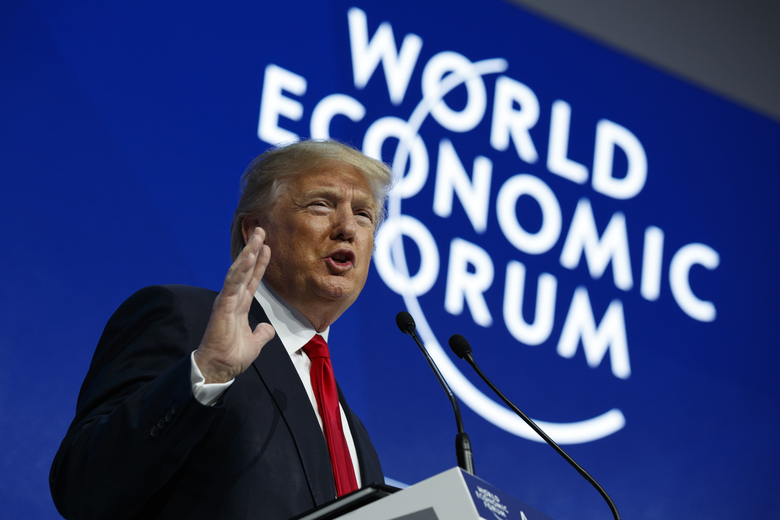 But Joseph Stiglitz, a Nobel Prize winner in economics, found it far from convincing, and argued that the new U.S. tax cuts will create a bubble in the housing market. "I've never known an economy to grow long-term by real estate speculation," he said. As if making a salesman's pitch, Trump repeatedly boasted about the nation's economy and pushed for international cooperation combatting terrorism. But he left unaddressed a number of concerns for the globalist community, including climate change, the fate of refugees and diplomatic solutions for a number of the world's hotspots, including the Middle East.

Kristian Jensen, Denmark's finance minister, provided some early international feedback, writing on Twitter "Honestly speaking, a rather ordinary speech from @realDonaldTrump. We didn't need a sale speech for ???? but a vision for a renewed cooperation about growth."

While interest in the president's remarks has been keen, the moment was shadowed by a report in The New York Times that he had ordered the firing of special counsel Robert Mueller last June, but backed off after White House lawyer Don McGahn threatened to resign.

Trump sought earlier Friday to ease tensions with a key African leader, meeting with Rwandan President Paul Kagame and calling him a "friend" in the aftermath of his controversial comments about African countries.

The meeting came after Trump drew widespread condemnation for allegedly referring to African nations as "shithole countries" in discussing immigration, according to those at the meeting. The president has denied using that language. Others present say he did.

And a day after Trump sought to make nice with British Prime Minister Theresa May, he said in a new interview that he "would certainly apologize" for retweeting anti-Muslim videos from a far-right British group.

Trump told British journalist Piers Morgan that "I know nothing about" the Britain First group and "would certainly apologize, if you'd like me to do that." A clip of the interview was released Friday, with the full interview scheduled to air Sunday on ITV.

“We expect there will be noise, fires, product discharges, and debris," said Georgia's DNR.
Nov 9th, 2020

They are trends that show the vital role of technology in the supply chain, and how its use has grown beyond inventory management and logistics.
Nov 5th, 2020
Follow Us
Most Recent