The future of public transportation in New York City is taking shape on the bayous of Louisiana and Alabama. 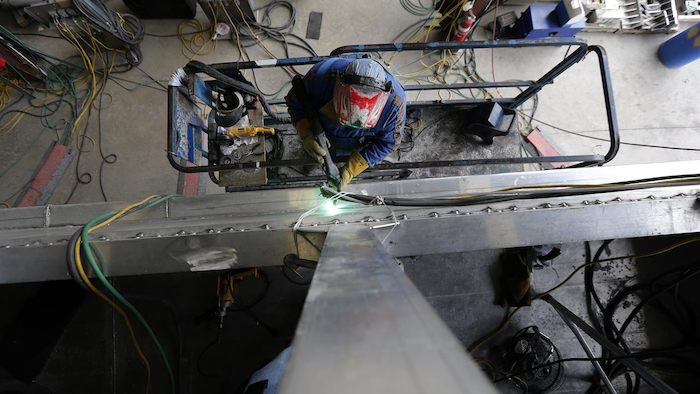 The future of public transportation in New York City is taking shape on the bayous of Louisiana and Alabama.

Shipyard workers in the two states are scrambling to finish the city's new ferry fleet in time for a launch this summer, just a little more than a year after it was first proposed.

The city is making a $335 million bet that the service will attract millions of passengers traveling between Manhattan and waterfront neighborhoods in Brooklyn, Queens and the Bronx that are now a distant walk from overcrowded subways.

Transportation infrastructure in the city has a tendency to take many years, if not decades, to get built, but in this case workers are under pressure to get the new ferries and docks built in a New York minute.

Horizon Shipbuilding, in Bayou La Batre, Alabama, has 100 employees — including 80 hired last summer — working to fill its order of 10 ferries for the 20-boat fleet. The rest are being built at the Metal Shark shipyard in Franklin, Louisiana, about 50 miles (80 kilometers) southwest of Baton Rouge.

Inside Metal Shark's huge boat-building shed last week, several of the $4 million catamaran vessels were in various stages of completion. Sparks and smoke flew around workers' protected heads as they welded one lightweight aluminum ferry frame. Other workers stood between the catamarans' two pontoons, sanding the rough metal. Electricians were busy wiring the navigation system. Cranes carried pieces of tubing to the ferry-to-be.

"A project like this is unique," said Junior Volpe, director of special projects for Hornblower Inc., the San Francisco-based company that will operate the ferry system in partnership with New York City.

More than a year ago, when they were still negotiating the construction of the ferries in such a short time period, "a lot of people were, like, 'Wow, I don't think this is ever going to happen.' And to prove that things are possible, here we are. We're sitting on the first ferry that's going to be delivered here at Metal Shark — and it's amazing," Volpe said.

City transportation officials say the new ferry fleet will speed up travel time in this city of islands by as much as two-thirds and come at a competitive price — $2.75 — the same as a subway fare. That compares with the limited ferry service that currently takes commuters and tourists across the Hudson and East Rivers at $4 to $6 per ride. New York's fifth borough, Staten Island, is served by its famous free ferry service that offers about 23 million rides a year.

In an interview with The Associated Press this week, New York City Mayor Bill de Blasio said he hoped the new ferry service, along with a new streetcar line he has proposed, would help lighten the transportation load for a city of 8.5 million that is expected to grow by an additional half million people in the coming years.

While de Blasio acknowledged the new ferry service's initial goal of 4.6 million annual rides per year is modest — the subway system handles 5.7 million rides on weekdays — he was hopeful the growth in ridership would be greater.

Travel by water in New York, he noted, harks back to the city's maritime glory days in the late 1800s, when there were no subways and the East River, the harbor and the Hudson River were abuzz with industrial production and business activities relying on waterborne modes of transportation.

"This is going back to what New York City had a century or more ago where there used to be ferries all over this city," de Blasio said.

She noted that with commercial activity no longer concentrated on the waterfront and most people living elsewhere, ferries handle only a fraction of the ridership of subways. "That doesn't mean ferries are not a good idea because they get at least some people off the trains that are crowded beyond capacity," she said.

In addition, she said, the financial structure of the new ferry service, in which the city plans to spend $180 million over six years subsidizing fares, could be difficult to sustain.

"But the new ferries are good for him in that he'll be inaugurating them a few months before the election," Gelinas said.

All that doesn't ruin the anticipation for longtime Astoria resident Claudia Coger.

After years of spending three, even four, hours a day commuting to work as a train inspector, with long walks to subways and buses, she vows to be among the first on the ferry, boarding at a dock just steps from her apartment.

"Yes, for sure, because I fish over here anyway!"