China's growth has fallen steadily over the past five years as the ruling Communist Party tries to steer away toward domestic consumption and services. 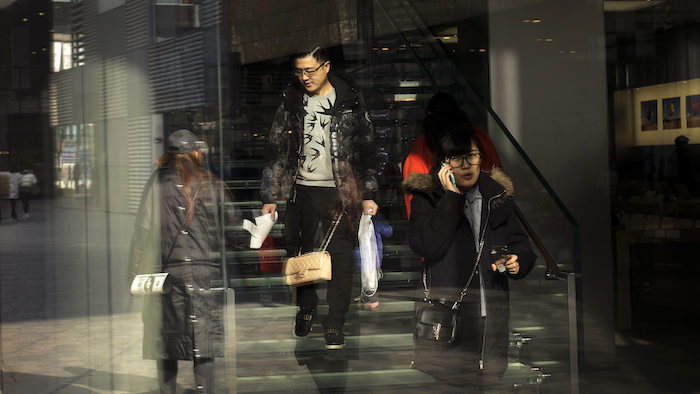 A man with his purchased goods walks down staircase as he prepares to leave an Apple Store in Beijing. (AP Photo/Andy Wong)

China's economy cooled further in the latest quarter, dragging 2015's full-year growth to a quarter-century low and deepening a slowdown that has fueled anxiety over its impact on the global economy.

The world's second-largest economy grew 6.9 percent in 2015, the government said Tuesday, down from 7.3 percent in the previous year. For the October-December quarter, growth inched down to 6.8 percent, the weakest quarterly expansion in six years.

China's growth has fallen steadily over the past five years as the ruling Communist Party tries to steer away from a worn-out model based on investment and trade toward self-sustaining growth driven by domestic consumption and services.

But the unexpectedly sharp decline over the past two years prompted fears of a politically dangerous spike in job losses. The slowdown has rippled around the world, crimping demand for South Korean electronics and Australian iron ore as well as Middle East oil and Brazilian soy.

The Chinese slowdown and a plunge in Shanghai stock prices have prompted concern about a further loss of support from an economy once seen as an engine of global growth. That has depressed international financial markets even as the United States and Europe show signs of improvement.

"Official data do not point to a hard landing in the fourth quarter of 2015, but they provide little reason to stop worrying about China's drag on the global economy, either," said economist Bill Adams of PNC Financial Services Group in a report.

Growth was in line with private sector forecasts and the ruling Communist Party's official target of about 7 percent for the year. 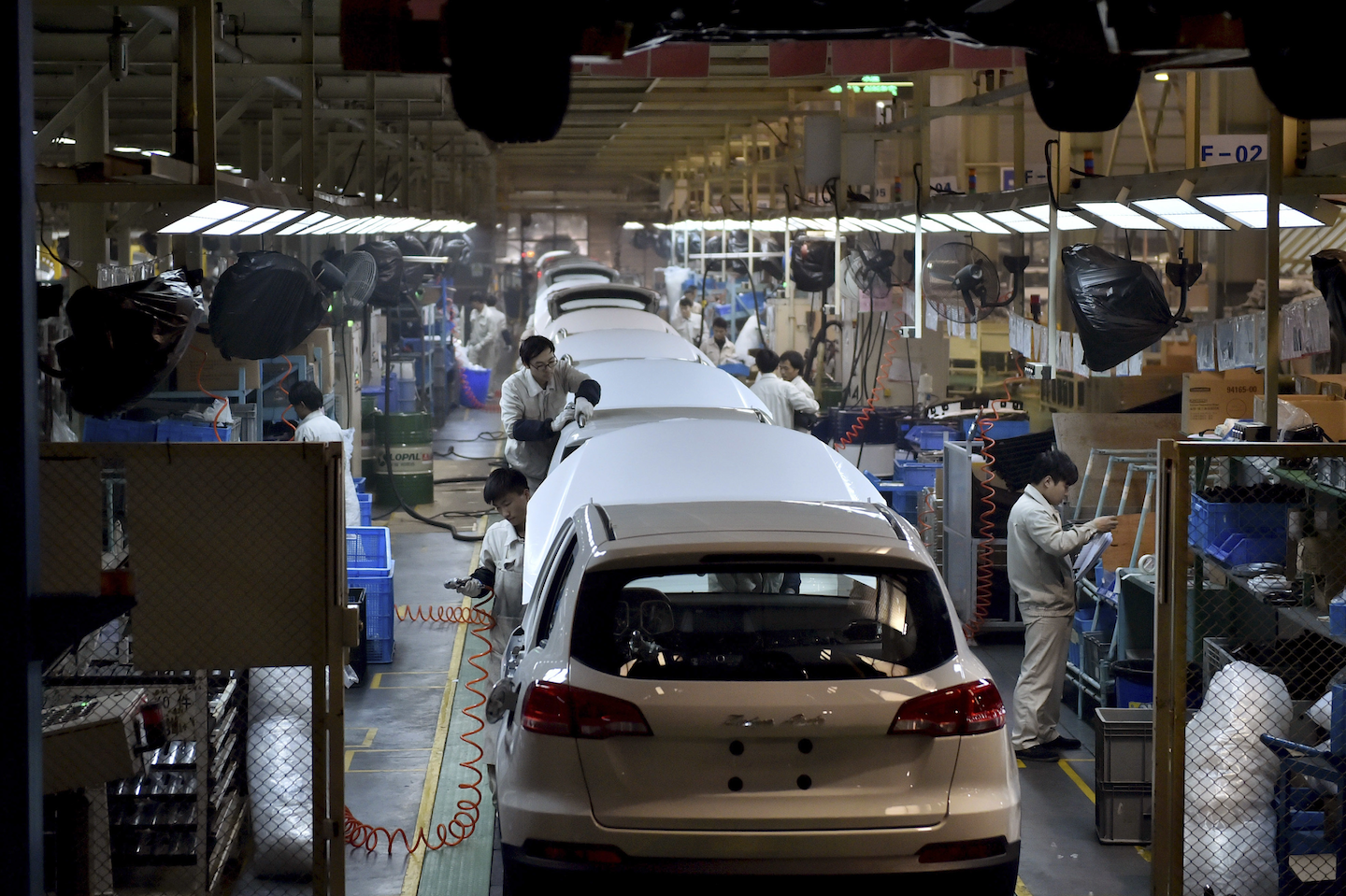 Chinese workers labor on the assembly line of the X5 SUV of Zotye Auto in Hangzhou in east China's Zhejiang province. (Chinatopix via AP)

Beijing responded to ebbing growth by cutting interest rates six times since November, 2014, and launched measures to help exporters and other industries. But economists note China still relies on state-led construction spending and other investment.

Full-year 2015 growth was the lowest since sanctions imposed on Beijing following its crackdown on the Tiananmen Square pro-democracy movement caused growth to plummet to 3.8 percent in 1990.

The October-December growth figure was the slowest quarterly expansion since the global financial crisis, when growth slumped to 6.1 percent in the first quarter of 2009.

"The international situation remains complex," said Wang Bao'an, commissioner of the National Bureau of Statistics, as a news conference. "Restructuring and upgrading is in an uphill stage. Comprehensively deepening reform is a daunting task."

Growth in investment in factories, housing and other fixed assets, a key economic driver, weakened to 12 percent in 2015, down 2.9 percentage points from the previous year. Retail sales growth cooled to 10.6 percent from 2014's 12 percent.

December exports shrank 1.4 percent from a year earlier, well below the ruling party's target of 6 percent trade growth. For the full year, exports were down 7.6 percent, a blow to industries that employ millions of Chinese workers.

Forecasters see indications retail sales and other activity accelerated toward the end of 2015, suggesting Beijing's efforts to put a floor under the downturn are gaining traction. 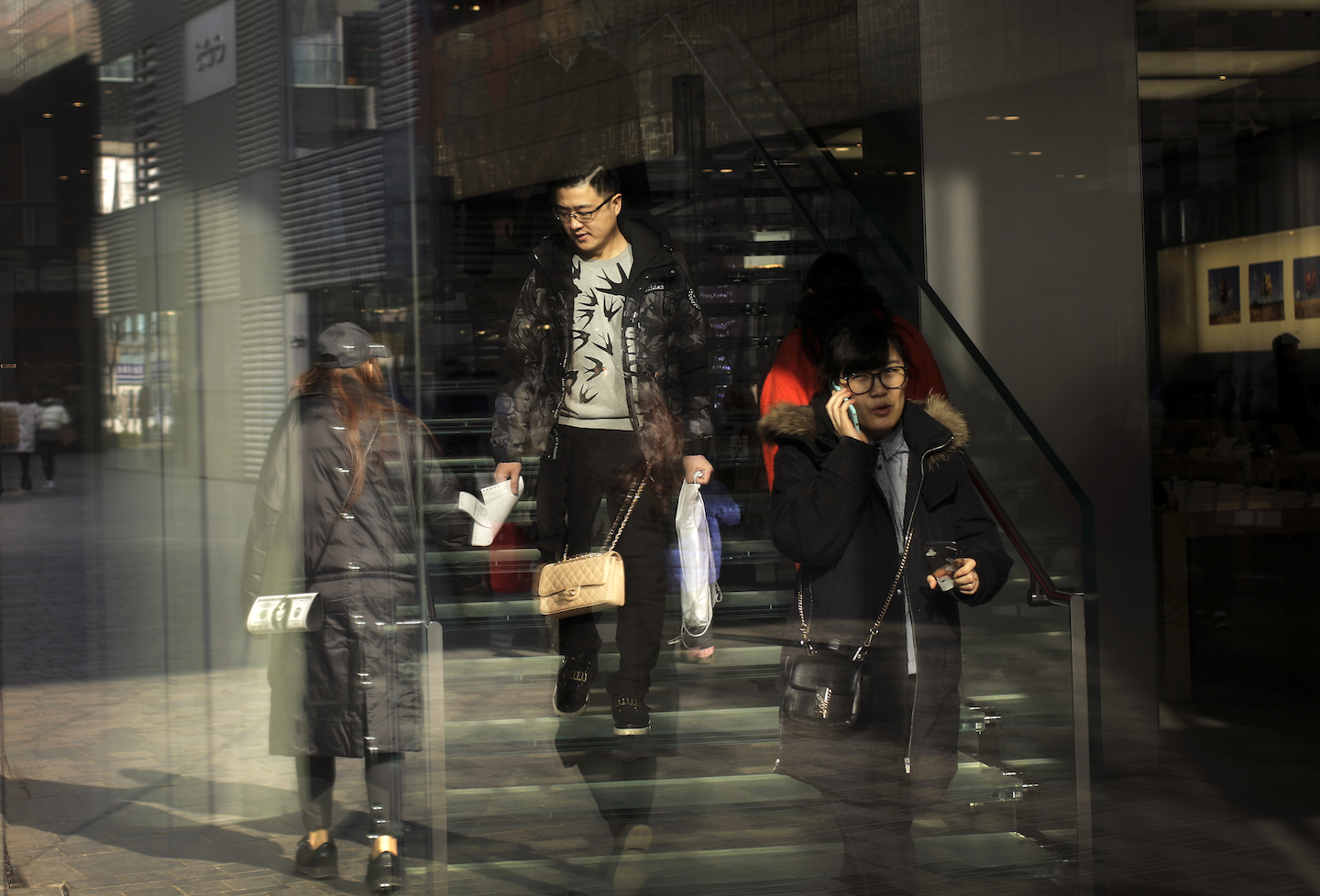 A man with his purchased goods walks down staircase as he prepares to leave an Apple Store in Beijing. (AP Photo/Andy Wong)

"Meanwhile, though, consumption continued to expand robustly, supported by solid wage growth," said Kuijs. "The robust growth in the consumption and services nexus is key for policymakers. They need it to avoid labor market stress."

Global financial markets were rattled by a plunge in Chinese stock prices in June. Chinese stock markets have little to do with the rest of its state-dominated economy, but investors abroad took the decline as a sign the economy as weaker than thought.

A growing number of private sector analysts question the reliability of China's data, suggesting economic growth is much weaker than reported.

Julian Evans-Pritchard of Capital Economics said other measures of activity suggested economic growth in the latest quarter was 4.5 percent, though that still would be among the world's strongest.

Spending on online commerce grew by 33.3 percent over 2014, an encouraging sign for official efforts to nurture a consumer economy. Wang said the share of total economic activity accounted for by consumption rose to 56.4 percent. That was up 5 percentage points from 2014.

"We still think concerns about China's outlook are overdone and that the recent market volatility has been driven more by sentiment than by economic fundamentals," said Evans-Pritchard in a report. "The short-run outlook is improving."