The strong numbers suggest that the U.S. economy is so far defying global weakness and growing solidly. 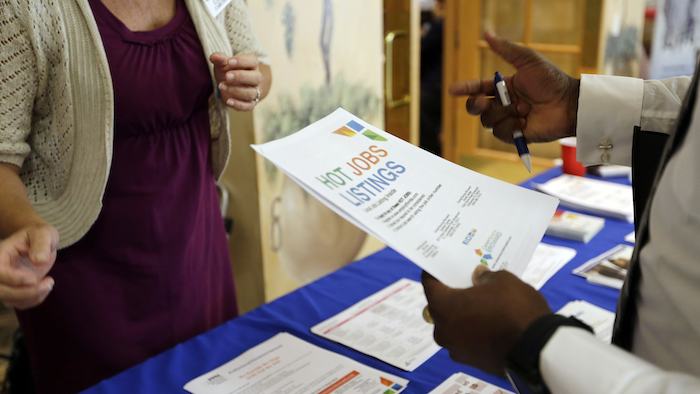 American employers added a robust 292,000 jobs in December, suggesting that the U.S. economy is so far defying global weakness and growing solidly.

The strong figures underscore the resilience of the United States at a time of financial turmoil stemming from China's slowing economy and plummeting stock market. Most economists expect U.S. consumer spending to continue to offset overseas weakness, though many foresee only modest U.S. growth.

In its monthly jobs report Friday, the Labor Department said the unemployment rate remained 5 percent in December for a third straight month. More Americans started looking for jobs and succeeded in finding them.

The government also said employers added a combined 50,000 more jobs in October and November than it had previously estimated. For the July-September quarter, hiring averaged 284,000 a month — the best three-month pace in a year.

U.S. stock futures, which had been up sharply before the jobs report was released, rose further afterward.

"The economy is reflected most strongly in the jobs numbers — and it's doing OK, maybe better than OK," said David Berson, chief economist at Nationwide Insurance.

"2015 went out with a megabang," says Patrick O'Keefe, director of economic research at the accounting and consulting firm CohnReznick. "It speaks to the underlying strength of the domestic economy. The United State is intertwined with the international economy but to a far lesser degree than many other countries." 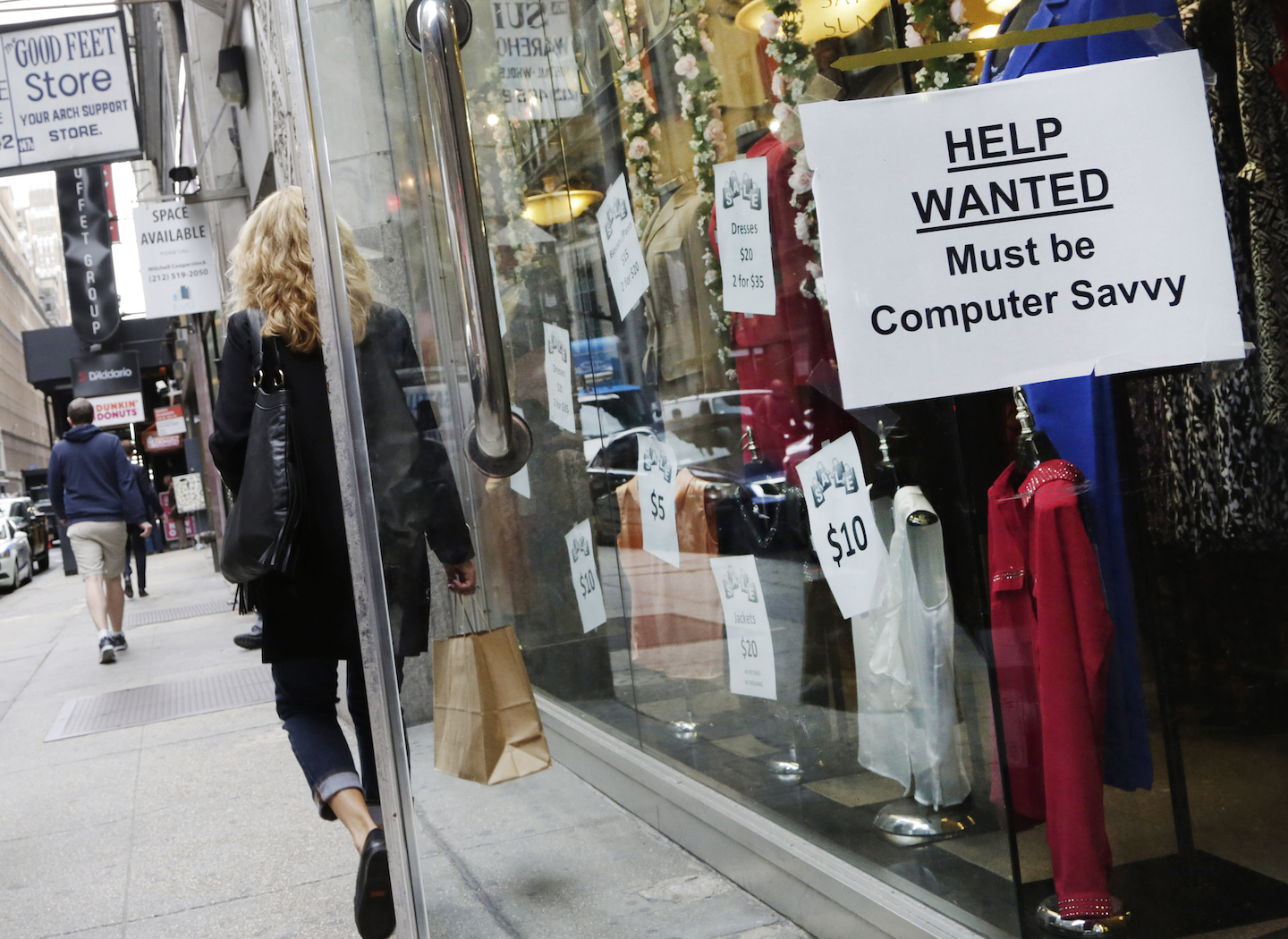 O'Keefe noted that global trade accounts for only about 30 percent of U.S. economic activity, one of the lowest such percentages in the world.

Even as demand for workers grew, average hourly pay slipped a penny in December to $25.24 an hour. Still, average pay has risen 2.5 percent in the past year, only the second time since the Great Recession ended in mid-2009 that it has reached that level. At the same time, pay growth remains below the roughly 3.5 percent pace typical of a healthy economy.

Last month, the percentage of adults with jobs rose for a second straight month, though it remains below pre-recession levels. And many of the new jobs were in higher-paying industries: Construction added 45,000, health care nearly 53,000. Professional and business services, which includes accountants, engineers, and architects as well as lower-paid temporary workers, added 73,000 positions.

For months, U.S. employers have hired steadily even as global growth has flagged and financial markets have sunk. Stronger customer demand has given most businesses confidence to hire even though some sectors — notably manufacturing and oil and gas drilling — are struggling. 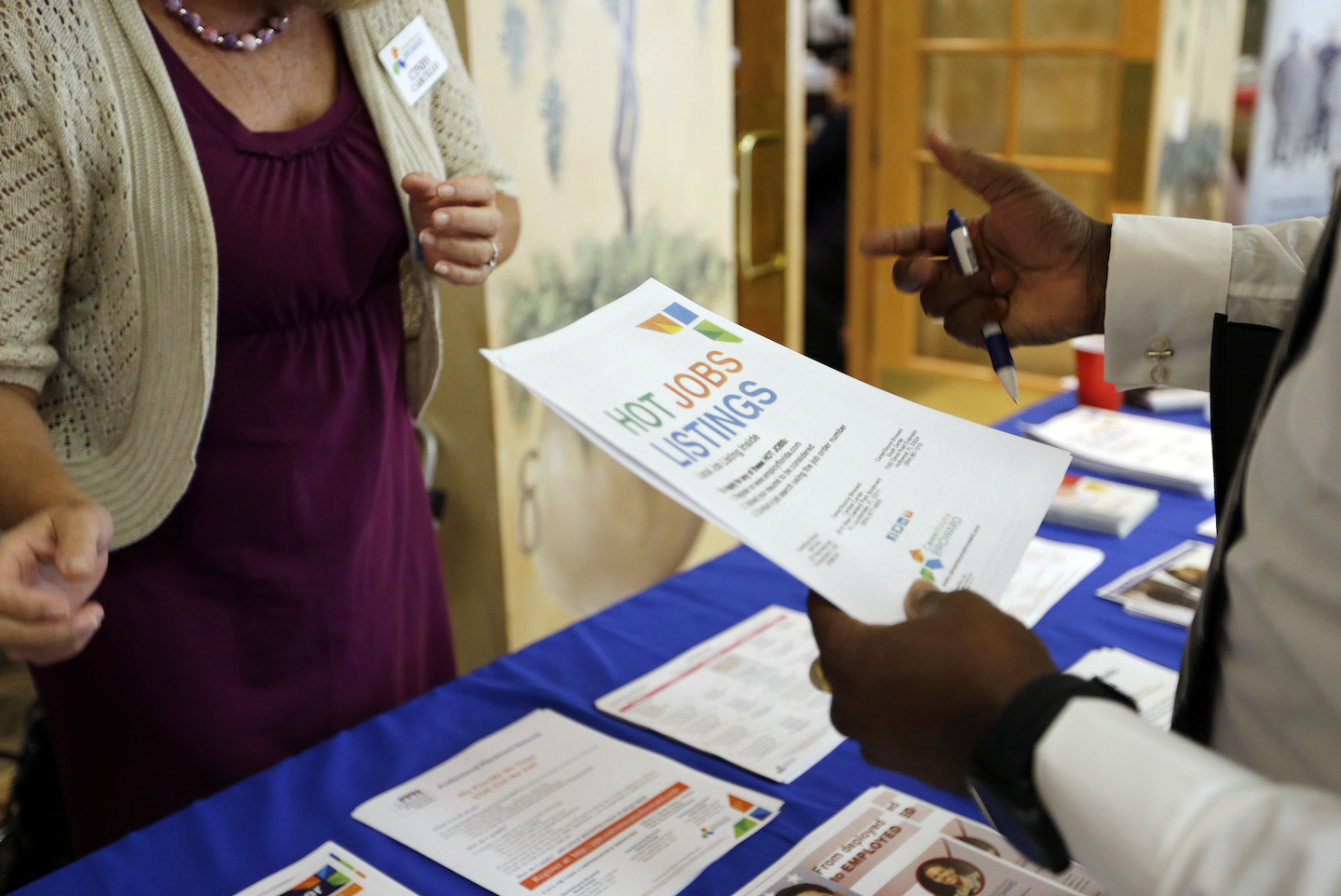 Still, stumbling growth in countries like China, the world's second-largest economy, and financial market turmoil might pose long-term challenges for the U.S. economy. A strong dollar and faltering global growth have already cut into exports of factory goods.

The dollar has climbed about 10 percent in value in the past year compared with overseas currencies. That has made U.S. goods more expensive globally while lowering the price of imported products.

In November, exports fell to their lowest level in nearly four years and shaved about 0.6 percentage point from the economy's growth in 2015, according to Goldman Sachs. Most analysts estimate that the economy expanded at a modest pace 2.5 percent last year.

Another blow to manufacturing has been oil prices, which fell to their lowest level in 12 years Thursday. Oil and gas drillers have responded by slashing payrolls and sharply cutting spending on steel pipes and other drilling equipment.

Manufacturing added 30,000 jobs last year, a marked decline from 2014. Yet it makes up just 10 percent of the U.S. economy and oil and gas drilling even less.

In another sign of consumer health, auto sales rose to a record high last year as cheap gas and low interest rates led to booming sales of SUVs and pickup trucks.

Lower gas prices may have hurt the oil patch, but they should benefit consumers by cutting their gas bills.

Chris Christopher, an economist at IHS, a forecasting firm, estimates that American households saved, on average, $722 last year from cheaper gas. He expects them to save an additional $217 in 2016 given the continuing drop in oil prices.