Railroads are responsible for maintaining their bridges and the Federal Railroad Authority audits their efforts. 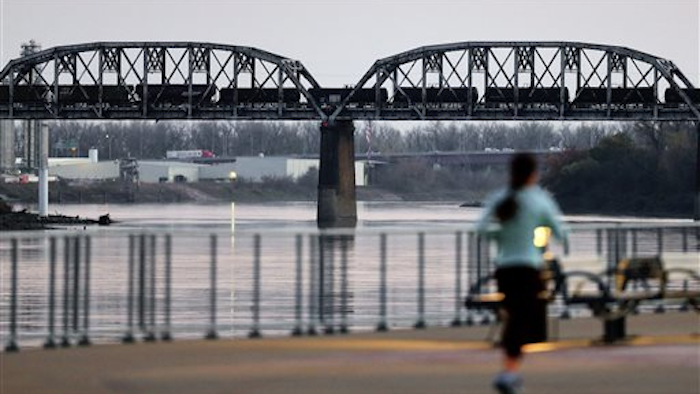 Two environmental groups say they are worried about the safety of railroad bridges because inspection reports generally aren't public, and railroads take care of their own bridges.

The Waterkeeper Alliance and ForestEthics released a report focused on railroad bridges Tuesday.

"The federal standards for rail bridge safety leave far too many loopholes in deference to owners of railroad bridges," said Larissa Liebmann, an attorney with the Waterkeeper Alliance.

The strength of railroad bridges is of particular concern now because railroads hauled 492,126 tank cars of crude oil last year, up from 9,500 cars in 2008 before the oil boom took off in the Bakken region of North Dakota and Montana.

The crude oil often travels in trains with more than 100 tank cars, and there have been several fiery derailments involving crude oil in recent years.

Railroads are responsible for maintaining their bridges and the Federal Railroad Authority audits their efforts. As part of that, few inspection records are sent to regulators who review them at railroads, so the records generally aren't subject to public disclosure.

FRA spokesman Matt Lehner said the agency is doing what Congress directed it to in 2008 to ensure railroad bridges are safe, but it could bolster its inspection program if it had more resources.

Association of American Railroads spokesman Ed Greenberg said railroads work hard to ensure their bridges and tracks are safe, and the methods used in this report are suspect.

Volunteers from the environmental groups visited 250 of the nation's roughly 100,000 rail bridges and found what they described as signs of deterioration on 114 of the bridges, including crumbling concrete and rust.

Liebmann said they tried to find engineers to review their observations but couldn't find any that would, because the groups lacked access to detailed documentation on the bridges.

Federal Railroad Administrator Sarah Feinberg said she's confident railroad bridges are sound, but that the industry hasn't done enough to assure the public this is the case.

"I know that railroads are expending significant resources on maintaining bridges," Feinberg, who has encouraged railroads to be more responsive to concerns from the public and elected officials, told a rail industry group last week. "I know that just because a bridge isn't pretty doesn't mean it isn't in good shape and it isn't going to remain in good shape for decades to come."