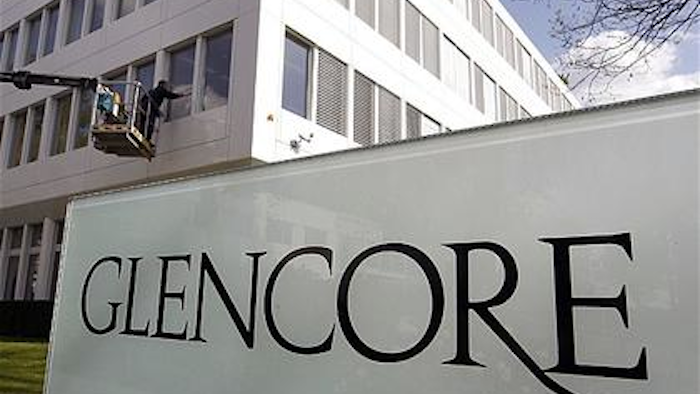 Shares in commodities group Glencore rose strongly Friday after the company said it is slashing its zinc production by a third and cutting jobs in response to sharp fall in the price of the metal.

The move, which will involve a reduction in annual zinc production by 500,000 tons in Australia, South America and Kazakhstan, is the latest response by the Switzerland-based company to the slide in commodity prices that has raised concerns over Glencore's underlying business model.

Investors responded positively, helping the company's stock top the list of risers on the FTSE 100 index of leading British shares. In midmorning trading, Glencore shares were up 6.8 percent at 128.90 pence.

Glencore's move will see global zinc production fall by around 4 percent and that's helped the metal rally on the London Metal Exchange by 8 percent to $1,800 a ton.

Despite Friday's rise, Glencore's stock is way down on where it was when it floated in 2011 at 530 pence. The selling pressure has accentuated in recent weeks as investors fretted over the impact of falling commodity prices on earnings and the company's ability to meet its debt repayments amid low commodity prices. On one day alone last month, Glencore's share price plunged by around a third.

"The main reason for the reduction is to preserve the value of Glencore's reserves in the ground at a time of low zinc and lead prices, which do not correctly value the scarce nature of our resources," it said. "These changes, although temporary, will unfortunately affect employees at our operations."

The troubles at the company, which is one of the world's largest producers and traders of commodities, illustrate the dramatic changes sweeping through the industry as an economic slowdown in China weighs on the prices for metals and minerals.

Glencore, which was founded in 1974 by the late commodities trader Marc Rich, floated in 2011 in a listing that valued the company at a little less than 40 billion pounds ($60 billion) and made billionaires of several of the company's executives, including CEO Ivan Glasenberg.

China's economic downturn is at the heart of Glencore's difficulties. Mining and commodities companies sought to take advantage of the country's booming growth at the turn of the decade, when many of the world's leading economies were struggling to emerge from the global financial crisis and ensuing recession.

Friday's move follows a package of measures last month — from asset sales to suspending dividends and raising cash from new and existing shareholders — that it hopes will reduce debt by $10 billion. Even after that, the company's debt will be around $20 billion.