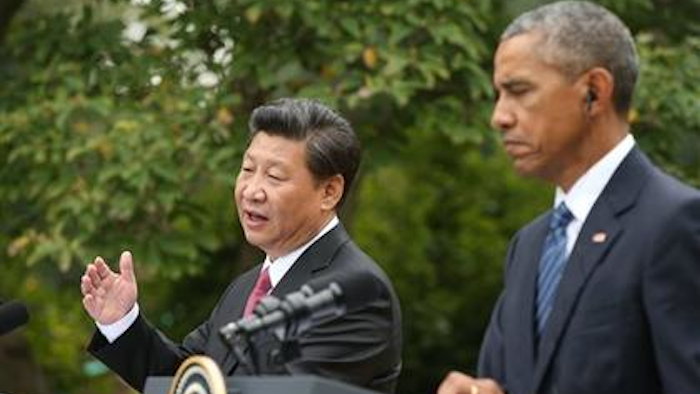 Somber against a backdrop of grand pageantry, President Barack Obama laid out a fresh threat of sanctions against China for alleged cybercrimes on Friday, even as he and Chinese President Xi Jinping reached an agreement not to conduct or support such hacking. "It has to stop," Obama declared.

The president, in a Rose Garden news conference with Xi, was clear that he'll be wary until the Chinese follow through on promised efforts to stop cyberespionage, saying, "The question now is: Are words followed by action?"

As for the possibility of sanctions, against either individuals or state-run companies, he said: "We will apply those, and whatever other tools we have in our tool kit, to go after cybercriminals either retrospectively or prospectively."

Obama said the agreement was progress — but he added that "I have to insist our work is not yet done."

Xi, for his part, agreed that the two countries would not "knowingly support" cybertheft and promised to abide by "norms of behavior" in cyberspace.

"Confrontation and friction are not the right choice for both sides," Xi said, speaking through a translator.

Both countries claim they don't engage in cybertheft of commercial secrets, one of the deep differences that have threatened ties between the world's two largest economies.

Overall, Obama said, the two leaders' state visit had yielded "an extremely productive meeting," adding that their candid conversations on areas of disagreement "help us to understand each other better."

On the thorny issue of China's disputed territorial claims, which have unnerved some U.S. partners in Asia, Xi said the Chinese have "the right to uphold our own sovereignty." But he promised respect for freedom of navigation and overflight.

On climate change, an area where the two countries have been cooperating, China said it will commit $3.1 billion to help developing countries reduce carbon emissions, one of a series of measures taken with the U.S. to combat global warming.

A joint statement listed a series of measures taken to flesh out their pledge, made last year, to work to reduce emissions.

Xi, during a morning arrival ceremony, called on the U.S. and China to be "broadminded about differences and disagreements."

Obama, in turn, said, "The United States will always speak out on behalf of fundamental truths.

"We believe that nations are more successful and the world makes more progress when our companies compete on a level playing field, when disputes are resolved peacefully, and when the universal human rights of all people are upheld," he said.

The White House's concerns over China's cyberattacks in the U.S. had caused particular strain ahead of Xi's visit. Obama has faced calls from some Republican presidential candidates to scale back the grandeur of Xi's visit, which included an Oval Office meeting, the joint news conference and a black-tie dinner.

Both countries have sought to emphasize areas where they do agree, most notably on climate change.

In conjunction with the state visit, Xi announced a blueprint for a nationwide cap-and-trade system beginning in 2017 that would cover highly polluting sectors ranging from power generation to papermaking.

Climate change is one of the few areas where bilateral cooperation has proceeded smoothly in recent months, largely because Beijing has struggled to contain heavy air, water and soil pollution that has destroyed farmland, sent cancer rates soaring and left its cities cloaked in dense smog.

U.S. officials have hoped for broader cooperation between Obama and Xi since the pair's unusually informal 2013 summit at the Sunnylands estate in southern California.

In recent weeks, however, U.S. officials have been taking a tougher line publicly against China's hacking, saying it is reaching epidemic levels. Officials have warned of retaliatory sanctions on businesses and individuals.

China dispatched its top domestic security official to Washington to try to stave off sanctions ahead of the president's arrival.