EU Approves GE Takeover Of Alstom, On Some Conditions

Tuesday's decision came after an eight-month investigation to see if the takeover would distort the European market. 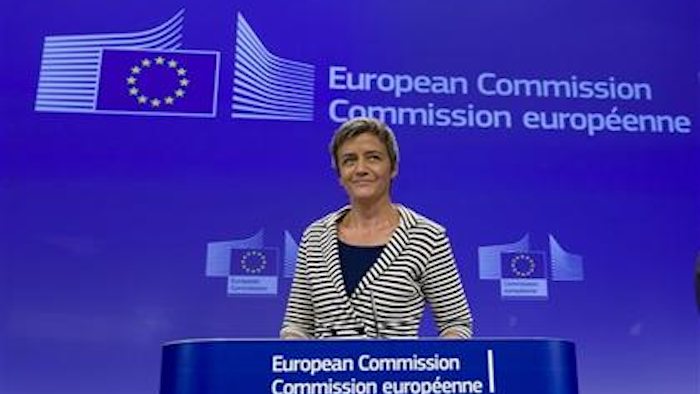 The European Union has approved General Electric's $14.1 billion takeover of the power and transmission division of French manufacturer Alstom, after the U.S. company committed to selling some operations to maintain competition.

Tuesday's decision came after an eight-month investigation to see if the takeover would distort the European market.

EU Antitrust Commissioner Margrethe Vestager said the approval depended on the sale of Alstom's heavy duty gas turbines business, arguing its takeover by GE would have hurt competition in a sector she sees as essential in fighting climate change.

The approval of the deal, she said, "shows that Europe is open for business and that Europe-based technology can thrive and attract foreign investment."

Vestager's office wields huge power in the world of mergers and acquisitions. Its opposition has thwarted several major deals in the past or forced companies into fundamental changes — such as selling chunks of their operations — to meet the EU's aim of maintaining market competition.

Vestager said that as part of the approval of the GE-Alstom deal, a portion of the heavy duty gas turbine business would be sold to Italy's Ansaldo.

After often intense trans-Atlantic cooperation with the Antitrust Division of the U.S. department of Justice, Vestager said she was satisfied with the terms of the deal.

She insisted, however, that the conditions of the merger also proved that multinationals would not be allowed to dominate the European market by simply buying out a competitor.

"It also shows that you have to play by the same rules as anyone else, that you cannot buy yourself into a monopoly," she said. "We welcome your business but we want you to compete."

Competition regulation has been sensitive issue since the EU blocked in 2001 the all-American $46 billion merger between General Electric Co. and Honeywell International Inc. even though it had been cleared by U.S. regulators.

The EU Commissioner said that the terms of the deal protected Alstom's heavy duty gas turbines business, which she said is vital for the modernization of Europe's energy supply with clean technology.