Supporters say it's possible to reduce emissions by increasing fuel efficiency standards, adding thousands of electric vehicles and adding solar and wind to the electricity grid. 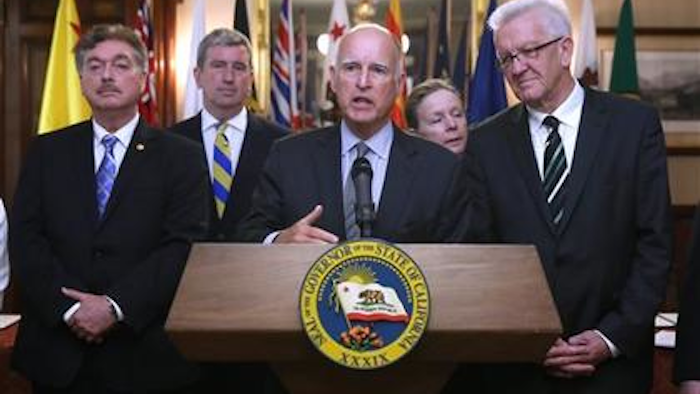 Gov. Jerry Brown has made climate change the centerpiece of his final tenure by laying out the most aggressive benchmark in North America, which would reduce California's carbon footprint and boost the state's renewable energy use to 50 percent in 15 years.

Securing legislation requiring that standard in the world's eighth-largest economy would be a timely win for Brown before international leaders meet in Paris in November for the United Nations climate change conference. Brown is likely to attend the conference, but he has not said so officially.

But first, the Democratic governor has to break through a logjam in his own party in the final week of the legislative session.

Many Assembly Democrats — including moderates and those representing less wealthy districts — are concerned that the ambitious proposal to cut petroleum use by half, boost renewable electricity use to 50 percent and double energy efficiency in existing buildings will hurt California's economy and working-class residents.

An oil industry-funded group, the California Driver's Alliance, is running what climate law proponents call "fear-mongering" ads suggesting the bill will raise gas prices and even result in rationing, harkening back to gas lines during the oil crisis of the 1970s.

Lobbying has intensified on both fronts. Billionaire environmental activist Tom Steyer and Oscar-winning actress Halle Berry are making personal appeals urging undecided lawmakers to vote for the bill. They are joined by President Barack Obama, California U.S. Sens. Dianne Feinstein and Barbara Boxer and a long list of fellow Democrats.

So far, the Brown administration and legislative leaders have shared little publicly as backroom negotiations come down to Friday's deadline to consider bills.

"I think the historic weight of this measure is starting to be felt," said Senate President Pro Tem Kevin de Leon, D-Los Angeles, during a press conference Tuesday with local bishops, who cited Pope Francis' encyclical on the environment as a call to action.

"I think at the end of the day that many members on the Assembly side will clearly look at the short- and long-term implications of health and to the economy of California and will do the right thing," said de Leon, who is carrying Brown's proposal.

Californians share Brown's environmental concerns and a majority supports his call for tougher standards. A July poll by the Public Policy Institute of California found 79 percent of residents agree global warming is either a very serious or somewhat serious threat to quality of life.

One of the main sticking points for lawmakers reluctant to tighten climate change rules concerns the California Air Resources Board, an unelected body with broad power to set vehicle emissions and fuel standards to decide how the state will reduce oil use.

Some moderate Democrats want the Legislature to approve board regulations, but de Leon has said he is unwilling to strip the agency's power. Sen. Fran Pavley, D-Agoura Hills, who is carrying a companion bill to extend California's current emission-reduction targets to 2050, said she would add a requirement for the board to conduct a cost-benefit analysis of policies for lawmakers to review.

Another major point of contention is the mandate to cut gasoline use by 50 percent. The oil industry views it as a direct attack on its business, and it is fighting back through ads and lobbying in the Capitol. Assemblyman Henry Perea, D-Fresno, whose district is dominated by oil and agriculture, has been the most visible moderate. He has suggested scaling back the petroleum mandate.

Supporters say it's possible to reduce emissions by increasing fuel efficiency standards, adding thousands of electric vehicles and adding solar and wind to the electricity grid. They say the push to use advanced technology will create a new economy of clean energy, good-paying jobs.

Still, lawmakers worry about the practical effects on residents.

"I like the bill, I think it's good. My kids have asthma. But my frustration is the amendments are coming in the last nine days of session and we haven't even seen them yet," Cooper said. "I just want to make sure the middle-class and poor people aren't left out."

Complicating climate change talks in Sacramento are a pair of special legislative sessions to figure out how to pay for California's transportation infrastructure and state-funded health care. Lawmakers also have hundreds of bills to tackle in the final hours of the legislative session.