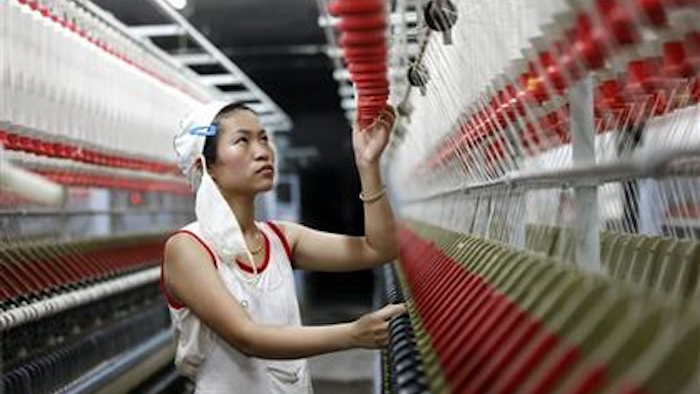 Chinese manufacturing showed further signs of weakness in August, adding to evidence of an inexorable slowdown in the world's No. 2 economy despite recent government efforts to support growth.

An official manufacturing index based on a survey of factory purchasing managers fell last month to 49.7, the lowest level since August 2012, from 50.0 in July.

The index, compiled by the Chinese Federation for Logistics and Purchasing, is based on a 100-point scale on which numbers above 50 indicate expansion.

A separate survey, the Caixin purchasing managers' index, fell to a six-year low of 47.3 from 47.8 in July, although the number was slightly better than a preliminary reading released last month.

Caixin's survey focuses on smaller, private enterprises while the federation's survey is weighted toward larger, state-owned companies in China's manufacturing industry, which employs tens of millions. Taken together, the surveys provide a bleak picture of stubborn weakness in the overall economy.

With the official index falling below the "critical" 50-point mark, "manufacturing has insufficient growth momentum," National Bureau of Statistics economist Zhao Qinghe wrote in an analysis of the data.

Some analysts said the weakness may not be as bad as headline numbers suggest because it stems from temporary factory shutdowns in Beijing and nearby Tianjin in August. Authorities have been trying to reduce air pollution ahead of a massive military parade in the capital on Thursday to mark the end of the 70th anniversary of Japan's World War II surrender.

China's economic growth held steady at 7 percent in the latest quarter ending in June, which was the weakest performance since the 2008 global crisis. Officials hope to maintain the growth rate for the rest of the year but many economists doubt the target will be met.

In the latest attempt to shore up flagging economic growth, China's communist leaders cut interest rates last week, the fifth time they have done so in nine months.

The rate cut had been expected after a slew of disappointing recent economic indicators, including a larger-than-expected 8.3 percent decline in July exports, weak retail sales growth and slowing industrial production and investment.

Last month's business sentiment was also weighed down by sharp declines in China's stock market and a surprise currency devaluation that roiled markets worldwide and a devastating explosion in the busy port of Tianjin.

"Recent volatilities in global financial markets could weigh down on the real economy, and a pessimistic outlook may become self-fulfilling," said He Fan, Caixin Insight Group's chief economist.

"Macroeconomic regulations and controls must continue and fresh reform measures must be introduced. Fine-tuning should go hand in hand with speedier implementation of structural reform in order to release the full potential of growth and lead the market to confidence."