Obama Has Yet To Sell House Democrats On His Trade Agenda 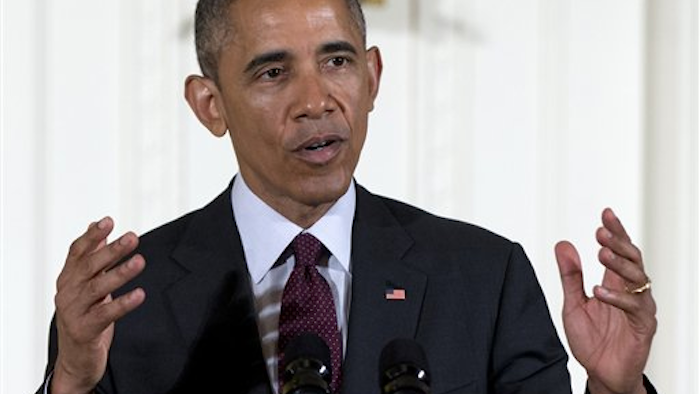 President Barack Obama's make-or-break push for expanded trade is meeting stiff resistance from fellow Democrats in the House, the very lawmakers who helped him claim crucial wins on health care and other issues.

With a House vote coming as early as next week, these Democrats note that labor unions are running hard-hitting ads against those supporting the president's trade agenda. And many of their constituents, they say, harbor bitter memories of the 1995 North America Free Trade Agreement.

But other factors also are complicating Obama's bid to round up 25 to 30 House Democrats — from a total of 188 — considered necessary to pass a bill that narrowly survived the Senate.

Some House Democrats cite tepid support from local business leaders. Others say the administration seems unwilling to modify the Senate-passed bill in ways to give them enough political cover to support it.

Lawmakers who wholeheartedly support Obama on most issues are accepting his phone calls and invitations to the White House, and still saying "no" on trade.

"My district took a severe beating as a result of NAFTA," said Rep. G.K. Butterfield of North Carolina, who chairs the Congressional Black Caucus. "We lost thousands of jobs that were exported to other countries. And my constituents still remember that."

Butterfield said he spoke with Obama for 40 minutes in the Oval Office, mostly about trade, but he's leaning against the president's push for "fast track" negotiating authority. Butterfield said he doesn't believe a proposed Pacific-rim trade deal would increase U.S. jobs, adding, "I hope I'm wrong."

Louisiana Rep. Cedric Richmond is another Democrat who's had long talks with Obama but still leans against the fast-track request.

The president "made an aggressive pitch," Richmond said, and he emphasized the possible benefits of expanded trade to the New Orleans ports. But his district is plagued by poverty, Richmond said, and no one has shown how new trade deals with Japan, Vietnam and other countries will improve its plight.

Richmond said he was astonished that his district's pro-trade business leaders didn't contact him until a few days ago, months after he started receiving heavy phone traffic against fast track. It's "borderline disgraceful" for these groups to wait so long to weigh in, he said.

Fast-track authority would let Obama present Congress with proposed trade agreements that it could ratify or reject, but not change. If he obtains it, Obama hopes to advance the long-negotiated Trans-Pacific Partnership, or TPP. Mexico and Canada, parties to NAFTA, are among the 12 countries in the pending pact.

"You can't fight the last war," the president said, and nothing can stop low-wage jobs from continuing to migrate to poor countries. However, he said, "if we've got potentially hundreds of millions of workers who are now subject to international labor standards that weren't there before, and now, when we're working with them — even if they're not enforcing those standards 100 percent — we've got enough leverage to start raising those standards, that is good for us."

Such assurances haven't persuaded House Democrats such as David Price of North Carolina. He said he's frustrated that the administration seems reluctant to tweak the fast-track bill in ways that would help Democrats support it and defend their decision before labor unions, a crucial party constituency. "The administration and the Republican leadership need to listen to people like me," Price said, because it could determine fast track's fate.

Price said he has asked for language to deal with "currency manipulation" by China and other countries, "even if it's aspirational" instead of detailed and immediate.

China is not a party to the TPP, but Obama says it might join later. Critics say China keeps its currency artificially low, which makes Chinese exports more affordable to foreign buyers.

Richmond said the AFL-CIO and other labor unions are going too far in threatening Democrats who back Obama on trade, and it might backfire. "I'm watching them do it, and it bothers me," Richmond said.

Republicans historically support free trade. Some Democrats say the GOP alone should pass the fast-track bill. But House Republican leaders say they could lose as many as 55 of their 245 members on the issue. With about 18 House Democrats publicly favoring fast track, both parties need to twist more arms, advocates say.

House Speaker John Boehner, R-Ohio, told Fox News' Brian Kilmeade: "We've got some Republicans who don't trust the president to do anything and don't want to give him any authority at all for anything, and I understand their concerns. This isn't about the president, frankly, it's about the country."

Butterfield predicts a nail-biting finish on fast track. "I think it will pass or fail by one or two votes," he said.